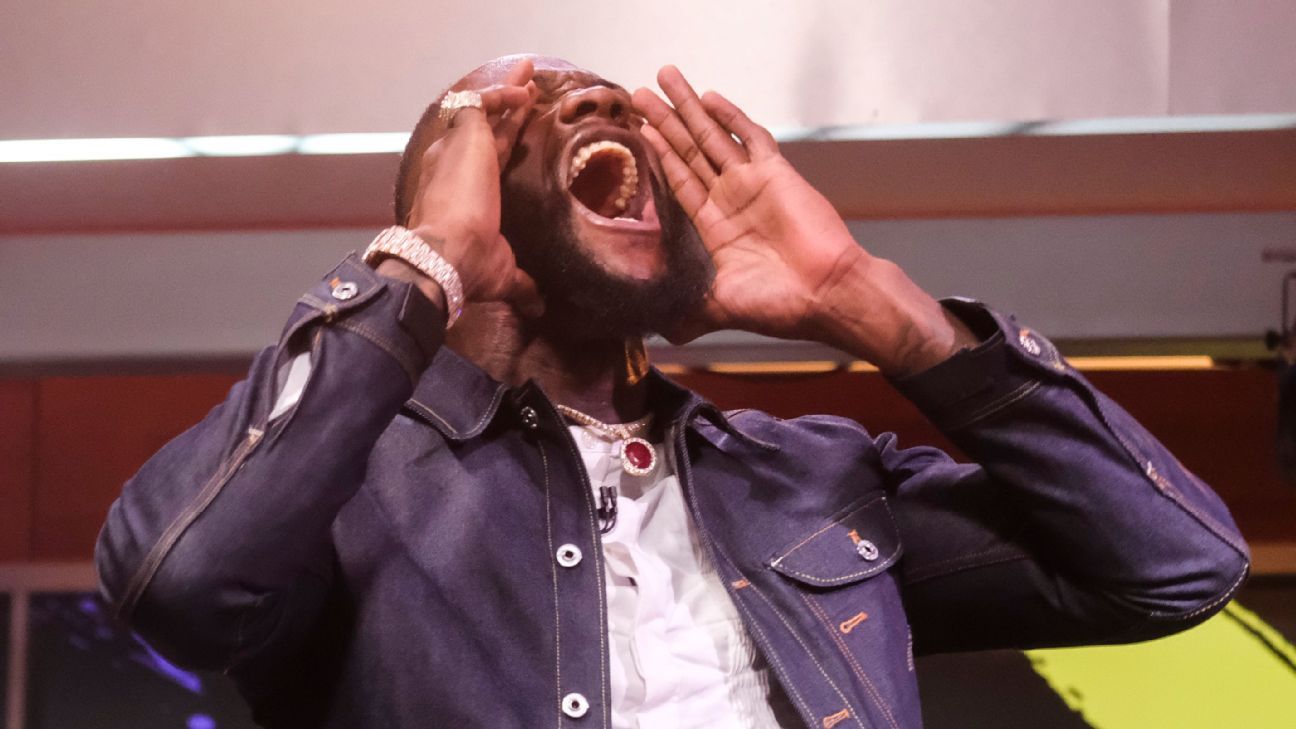 In a recent interview with ESPN in Los Angeles, Wilder candidly discussed myriad topics, from his rematch with lineal champion Tyson Fury to his thoughts about other elite heavyweights — as well as why he feels “disappointed” by Andy Ruiz Jr.

About Tyson Fury: He’s a funny guy, he’s a skillful fighter, good fighter. And for me, in my opinion, he’s a breath of fresh air, being in the heavyweight division, being able to have great fights with a person that can help me promote a fight because I’ve come up and so many guys don’t talk, or they don’t want to say what they want to do, or hype the crowd. It’s always been me promoting.

Then, when I had him come along, it was good promotion and we can cross-promote with his team, and make great fights happen. So that’s what I think about him, when I hear his name.

About Anthony Joshua: Just a straight coward, man… I just think coward — and that’s it.

About Andy Ruiz Jr.: I was very disappointed in Andy Ruiz, maybe because I was so invested in it. I really wanted to see him really achieve greatness. Especially where he came from in boxing, almost getting evicted from his apartment. I don’t know what eviction feels like — and I never want to know what that feels like to be homeless — but that was the verge that he was on, and an angel came and saved him. Gave him an opportunity, a GREAT opportunity to be a megastar [against Joshua].

Ruiz beat him, knocked him out, knocked him down four times and got him out of there. He had the biggest fight of his life — he let it all go [in the rematch].

About Jarrell Miller: Idiot. He’s an idiot. He had a major fight [against Joshua last year]. I don’t know the amount [he was getting], I go off what I hear, let’s say $6 million. He blew it. He blew it all on ‘get rich or die trying.’ And what I mean by that is that he put something in his system, a PED [performance-enhancing drug] that gives rats cancer.

So if it gives rats cancer, what do you think it’s going to do to you?

About Kubrat Pulev: He’s a brave and strong fighter. I haven’t seen too much of Kubrat Pulev because he hasn’t been out there too much. The things that I have seen, he definitely put up great fights, [the fight against Wladimir] Klitschko and stuff, I think he’s strong willed, strong minded.

About Dillian Whyte: Oh my God…. where’s your B-sample? Where is the B-sample? Talking about drug tests, that’s another one. Another guy that I consider to be the cheerleader of the division, I want to go even nastier with my words with him, but my energy is not allowing me to come up with nothing to say. That means something.

But y’know, this is a guy who is just a compulsive liar, he’s talking about this thing of wanting to fight me — but it’s all lies. He had multiple chances of fighting me. Just to name a few, I told him to fight [Luis] Ortiz, not only did I tell him, I gave him my word [I will be fighting next], but the WBC mandated him to do so and he didn’t. [Dominic] Breazeale said, ‘Hey, if you got a problem with the mandatory spot, fight me for the mandatory spot and that’ll get you in there.’ That was another one and he declined every last one of those things. I can go even farther but there ain’t no sense of wasting time on him.

On how the rematch with Fury will go

Deontay Wilder was jumping for joy on the inside when Tyson Fury rose to his feet after being knocked down in the 12th round of their first fight.

What I’d do different this time, the biggest part of it, the most important part of it: stay calm. Stay calm and pick your shots.

The first time, I wanted to do something that I already knew I could do — that’s knock him out. But I wanted to force it, and once I calmed down and settled in, it just happened [knockdowns of Fury in the ninth and 12th rounds]. This time it’s just naturally going to come on. That was my first pay-per-view, now I’m leading into my third pay-per-view, so that’s flushed out of the pipes as well.

I’m just in a happier place in my life at this point in time, and I think that’s what’s going to carry me a long way, especially in this fight. So I’m expecting a knockout. It’s going to be an amazing fight while it lasts, and I don’t want people to miss it.

On Fury’s focus for the fight

Tyson Fury says “SugarHill” Steward’s extensive coaching resume will bring the best out of him ahead of his rematch with Deontay Wilder.

I don’t think Fury is as focused as he needs to be — that’s on purpose. I really feel that he has some type of feeling in the back of his head that Deontay Wilder’s going to be even better than he was the first fight. People go and look off of my knockouts. It’s just like the Joshua situation when I knocked Breazeale out. [Joshua] wanted me to do it later than him [Joshua knocked out Breazeale in the seventh round in 2016], but when I did that [knocking out Breazeale in the first round], that threw him off [against Ruiz].

So Ruiz should probably come and thank me because the whole world is looking at me and what I’m going to do with these knockouts and when [Joshua] saw that, it changed his mindset. And Fury’s the same way, when you’re knocking guys out like that, and then another one with Luis Ortiz, a fighter none of them heavyweights wanted to fight, or give him an opportunity and I come and do it, not one time, but two times. That plays with your conscience.

I think having all that stuff or whatever, that is going to be an alibi. ‘Well, I did this,’ gaining weight. That’s why you’re bringing in so many trainers and all that stuff. If Fury felt so strongly about the first fight, as he claims, then why the changes?

That’s what I have a problem with, I’ve talked to my people about it, not often, but every now and then we have conversations about these situations with guys being on PEDs, and my thing is, if you get caught — and this isn’t his first offense — you get caught the second time, you’ve got to lay down the law.

And I don’t think these federations, these organizations, are doing enough to lay down the law. My thing is, why am I paying money to find out a guy is on drugs when there’s nothing serious going to be done about it? The only thing we’re paying for is the awareness. ‘OK, he’s on drugs.’ Alright, I still want to fight him at the end of the day. Any fighter still wants to fight. ‘Let me fight,’ of course. ‘Let me fight’.

I just think there should be some grounds laid down because if we’re going to have fighters [who are] going to cheat, put things in their body to make their bodies do things their body is not meant to do, then people can’t crucify me when I say about killing someone [in the ring], because my words is only a half-percent of my actions.

Now, their actions… it’s premeditated, too.

On his Hollywood aspirations

Most definitely it’s in my future. I’m doing it now. I’m going through the course of it now, different things, got different roles. I’ve been on major television platforms, major shows, doing things. I’ve had cameos. So I’ve gotten opportunities to play two sides, not only the athletic side or an athlete, being me in a certain part in a script, but I’ve also had my own characters, whole different from boxing and I love that I had the opportunity early because it allowed other directors, other people that are in film to see the true colors and characters of myself. That, ‘not only can he play himself, he can play someone else,’ and can do it well.

When I heard the reports that Ruiz fired his trainer, I don’t really get myself emotionally involved too much when other people make their decisions. I always go, ‘Well, they made it for a reason, I wish them well on their career moving forward.’ It’s human to express yourself, ‘Oh, man, he don’t need to do that,’ and there’s nothing wrong with that, but at times, I find myself cutting off, I hold back.

There may be certain things I may talk about but I just may automatically stop because my energy, I don’t want to put anymore into it, or whatever. But y’know, he’s got to do what he’s got to do, and that’s just a part of boxing.

On staying loyal to his trainers Jay Deas and Mark Breland

I’m just a loyal person, that’s just part of my principles, my morals, and my goals as a human being. As a king, loyalty is everything. And with that being said, I can’t say I want loyalty and demand it, and not lead by example. I’m the type of person that tells people certain things and I expect certain things of them, but not only do I expect it of them, I lead by example.

Loyalty is big, especially in boxing because there’s a lot of snakes in this business, you’ve got to keep the grass cut. You can’t trust everyone in this game, especially dealing with that big green, and that’s money, that dollar bill. Many guys lose their souls in the sport.

You have trainers trying to steal fighters and stuff. That’s one thing we never had a problem with, sometimes Jay would go to certain camps with me, sometimes he couldn’t, he had to work. But he didn’t worry about that. I had many trainers try to come and provide their services and tell me what they were able to do for me. But I just felt so strongly with my team that I developed and have, I’ve been knowing these guys for years and we know each other.

We never leave a situation without it unsolved. We may disagree but later on we agree about certain things. We’re always like that. Us, we always say we love each other and it’s always real. I feel that’s the best way to have a team, a family-oriented team.