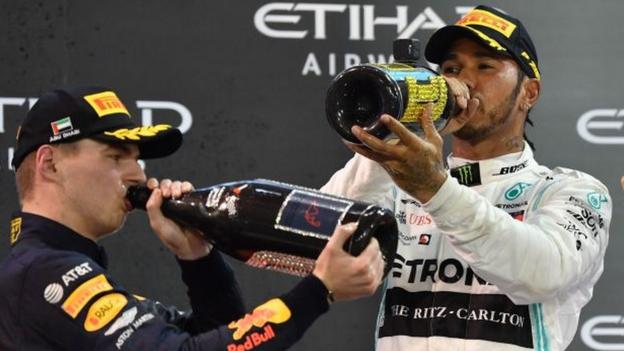 Red Bull’s Max Verstappen says he can beat Lewis Hamilton to this year’s world championship as long as his car is good enough.

The Dutchman, 22, thinks his team can “mount a challenge to Mercedes”.

Asked if he could beat Hamilton, he said: “Yes. It is very car-dependent, of course.”

Verstappen said he believed Hamilton and Mercedes were vulnerable if Red Bull could put them under more pressure.

“When you can put the pressure on, of course it is a lot harder for the guy in the lead,” Verstappen said.

“Even if we start within 0.2secs, you can really mount the pressure and I would like to start straight away there because then it is really on.

“I know that when everything is put together, as a team, under pressure situations like in Brazil for example – but also other difficult situations like in Germany [where Verstappen won in the wet and Hamilton and Mercedes made a series of errors] – you can see that the team is really excelling compared to the others.

“I am looking forward to when we get that fight and we are really close; I am pretty sure we can do better.”

Last year, Hamilton admitted he gave Verstappen more room when they were racing closely together because of the Dutchman’s reputation for aggressive driving.

But Verstappen said he did not believe that necessarily gave him an advantage over Hamilton.

“If you looked at Brazil, we just raced hard and very cleanly,” Verstappen said.

“From my side, I know I race hard but it is because I always want to try to get the best result out of it, and I have always done so.

“But when you fight for a title it is a different mentality. We were not in that fight so you know you have a few races when you can possibly win so you try everything to win that.

Building on a strong finish

Red Bull believe that stability in the rules going into 2020 will give them the chance to pick up from a strong finish to last season.

Verstappen won three races in 2019, their first season with engine partner Honda, and finished third in the championship behind Mercedes drivers Hamilton and Valtteri Bottas.

Red Bull finished the year on a high: Verstappen took pole position in Mexico, before losing it to a penalty for ignoring yellow flags; finished a strong third close behind the Mercedes in the USA; and then took pole and victory in the penultimate race in Brazil, where he passed Hamilton twice on track. Verstappen then finished second to Hamilton in the season finale in Abu Dhabi.

Verstappen added: “We have to wait and see in winter testing but I am very much looking forward to it. Everyone is very fired up and motivated, especially coming off the end of last year.”

Their new car will run for the first time in a shakedown test at Silverstone on 12 February ahead of the start of pre-season testing in Spain a week later.

Verstappen heads into 2020 with his future secure having agreed in December a new contract with Red Bull until 2023. The situation mirrors that of his fellow young star Charles Leclerc at Ferrari, who extended his deal to 2024 a few days later, while Hamilton is out of contract at the end of this season.

Verstappen adds: “I always felt very comfortable in the team, and it all went very quickly.

“I never really thought about it too much last year and we solved it over the winter time, and that’s a good thing because it takes away any doubts.

“There are no question marks, because when you go into a season when your contract is up at the end of the year, at one point it is going to be maybe a bit awkward [when you are looking] towards the next car and I didn’t want to have any of that.

“For me this is the right place. I feel really good in the team. There are a lot of good people in the team and I see the motivation and hunger to fight for victories and a championship possibly.”