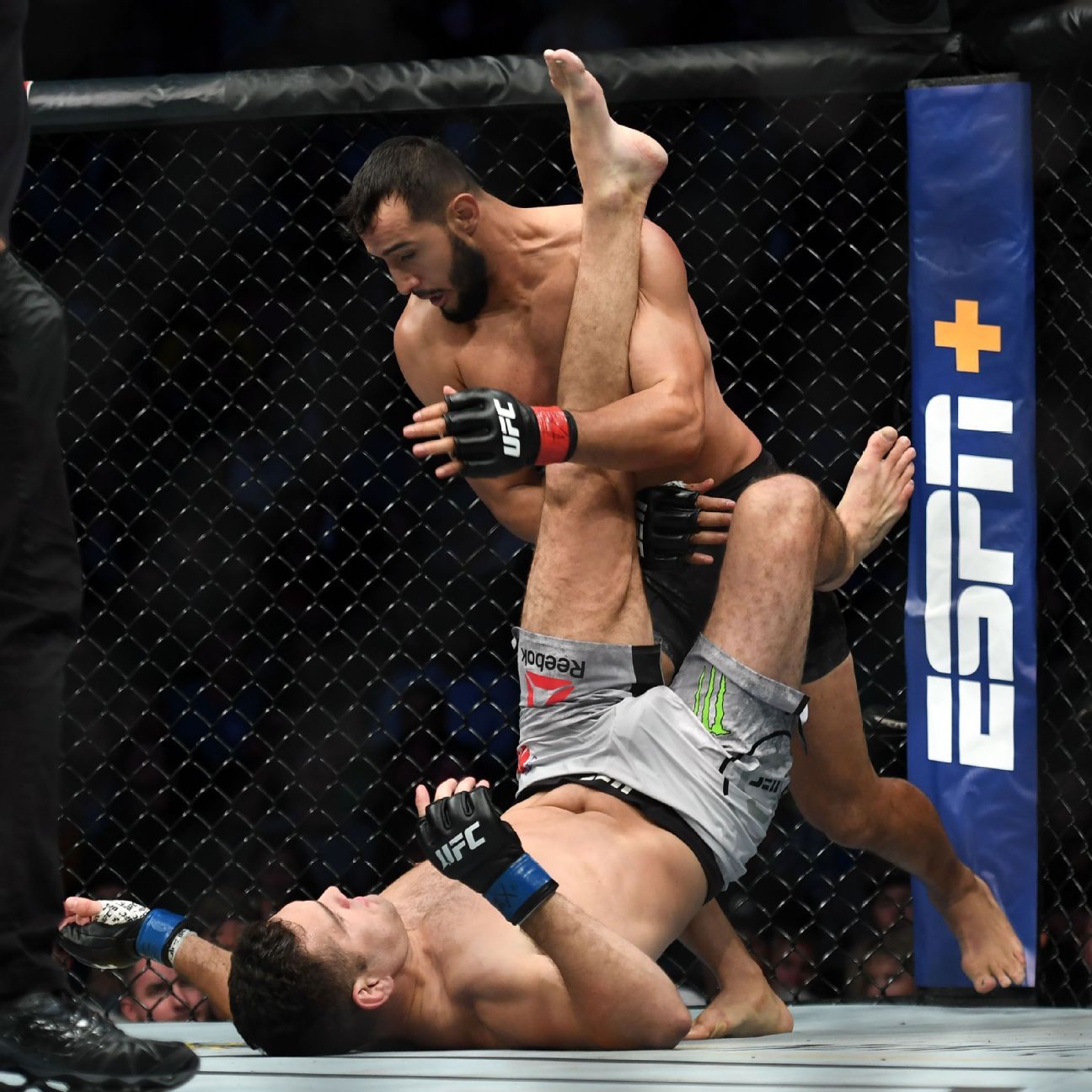 When Dominick Reyes woke up Monday morning, he was greeted by Jon Jones. It wasn’t a physical presence, but it was impactful nonetheless.

Jones posted a series of tweets criticizing Reyes’ athletic background, the opponents he’s beaten and even his small-town roots.

“I woke up to it,” Reyes said Monday on Ariel Helwani’s MMA Show. “I kind of laughed. This guy, man, he doesn’t stop.

“He tweeted something about being confident in yourself or something like that. I was like, ‘Hey man, I believe in myself. What do you want me to do? There’s no pleasing you.'”

Welcome to fight week — Jon Jones style. By the time Reyes steps in the Octagon on Saturday in UFC 247 to challenge Jones for the light heavyweight title, he’s going to be mentally exhausted, according to one former Jones opponent.

“Jon’s competing with you from the second the fight is announced. He’s digging into your life,” said Anthony Smith, who lost a unanimous decision to Jones on March 2, 2019.

Smith was watching the Reyes interview and recognized some of the telltale signs of Jones’ mind games.

“Dominick Reyes has no idea what he’s getting into,” Smith said. “It’s not even the Xs and the Os. There’s so much more to fighting Jon Jones that I learned now, but would’ve been pretty helpful before the fight…. There’s a lot of stuff that goes into fighting Jon Jones, and it’s Monday of fight week and Dominick is about to find out.

“That’s why he’s not ever going to be on the Michael Jordan, Muhammad Ali level. No matter how many wins he gets, no matter how many titles he wins, he can’t get out of his own way. He’s just not a good person.”@DomReyes says Jon Jones has damaged his legacy (via @arielhelwani) pic.twitter.com/myToT7QO2x

“He messes with your schedule. He just messes with you the whole time and by the time you get to the fight you’re mentally exhausted. Everything that Dominick was talking about [earlier in the show] … it rings so true, but it’s not. I know he feels like [he has everything under control], but he feels like that because Jon wants him to.”

The mind games started on social media well before the fight was booked, and things escalated during a Dec. 13 news conference.

“I guess I thought he was going to be more of a professional, but he’s a very emotional kind of guy,” Reyes said. “His emotions and his ego control his whole life. It was a little bit shocking. I didn’t expect his ego to be that strong in his life, but it makes sense for who he is.

“I knew he wouldn’t be cordial. He does little jabs. The way he approached it was just weird. I can’t really explain these things. Everybody wants me to explain these feelings, can’t explain it. I’m pretty in tune with the universe and I’m pretty in tune with energies, and he didn’t feel like some kind of unstoppable force — this Jon Jones dude, like monster dude — he felt like just a guy.”

Beating up on cans has got him convinced he’s a better athlete than most of the world. If he was so badass he would’ve won the California state wrestling championships, he would’ve went division one, He would have at least made a practice squad for the NFL. This man is delusional

Reyes said he felt more confident after squaring off with Jones at the news conference, but Smith said that’s only because Jones wanted him to feel that way.

“He studied every aspect of my entire life,” Reyes said. “He thinks he knows me. That’s why I laugh, because he honestly believes he knows me as a man, as a human being. He has no idea.

Reyes can expect a full week of the mind games, and then he’ll have to step in the Octagon with someone many consider the greatest fighter ever.

Jones: The storm is behind me

Jon Jones says he could see his next fight after Dominick Reyes being against Stipe Miocic for the heavyweight title.

Jones sat down with Helwani for an extended interview and discussed a wide range of topics, from dealing with past mistakes, to his reputation to possibly moving up to heavyweight.

More from Helwani’s interview with Jones can be found here.

“I didn’t break my jaw in that fight.”@ColbyCovMMA says his jaw was not broken against Kamaru Usman at UFC 245 (via @arielhelwani) pic.twitter.com/llHNREC2fL

Covington also said it’s “world championship or bust” for him next, saying that he would sit out until the UFC gives him another bout with Kamaru Usman.

After seven years in the UFC, Sergio Pettis found himself at a career crossroads in late 2019. The UFC announced a fight for December between Pettis and Kai Kara-France, but he and his team discovered that Pettis had no fights left on his contract and was a free agent.

Having never tested the waters, Pettis explored his options. He was a little bit afraid of the unknown, after such a long stretch in the UFC, and Pettis was “very close” to re-signing with the organization because of the goals he still held onto — but ultimately Pettis found Bellator to be his best option. On Jan. 25, the longtime UFC flyweight successfully debuted at Bellator 238 in Inglewood, California with a first-round submission win over Alfred Khashakyan.

“The deal was better, and it made more sense,” Pettis said of his Bellator contract. “I’m only 26 years old, why not make a business move and grow my name a little bit more?”

Pettis fought the bulk of his career at flyweight, but the move to Bellator, an organization that doesn’t have that division as part of its roster, necessitated a move up to bantamweight. Pettis said the timing for such a move couldn’t have been better.

“Honestly, the 125 cuts are hard. I’m getting older, too,” Pettis said. “I was cutting about 30 to 40 pounds to make the weight every time. It was just taking a toll on my body. I felt good at 135. I felt strong. I felt ready and confident.”

Pettis is a long way from where he was just over a year ago. Coming off losses to Jussier Formiga and Rob Font in late 2018, coach Duke Roufus encouraged him to read a mission statement every day. It said, “I will be confident and fearless in all that I do. No more second guessing myself or my capabilities. Pessimistic thinking is no longer a habit. I can change my future I can change my present. By being everything I am. Great.”

“I had all these negative thoughts in my head, all these anxieties, a little bit of depression and stuff that I had to overcome,” Pettis said. “And I feel like I am overcoming it. I had to get rid of some bad habits and replace them with good habits.

“Honestly, I was having talks with my girl, talks with my cousin, and I was like, ‘Man, if I lose this third fight in a row, I don’t know what’s going to happen. I might be done. At the time, I didn’t want to fight outside of the UFC, so I was like if I’m cut, I’m going to be done. It’s crazy how it all played out.”

Alexander Volkanovski has no doubt been living the good life since he defeated Max Holloway for the featherweight title at UFC 245 in December. He’s recognized more when he’s in public in his home country of Australia. He’s even the cool dad at his daughter’s preschool.

But not all is perfect for Volkanovski. He said on Monday that while his family and home are not in danger, all he has to do is look out the window to be reminded of the wildfires that have crippled southeast Australia.

“We’re alright. It hasn’t really affected us where we are,” Volkanovski said. “But even just yesterday, you look outside and there’s just smoke everywhere. It just hasn’t stopped.”

Neither has the pain in his right hand. It’s in a splint after suffering broken bones in the Holloway fight. He said that during surgery doctors found ligament damage in the hand. Volkanovski said he’s hoping those ligaments tighten soon or else another surgical procedure may be required.

His goal is to come back in the middle of the year and potentially fight on a card scheduled for Australia in July. Will it be against Holloway, who had won 14 of his past 15 fights entering the matchup versus Volkanovski?

“Dana [White] keeps saying that’s what he wants, we’ll see what happens,” Volkanovski said. “I’m not scared of nobody. Anybody in the top 10 wants a piece, I know I’ll get the job done.”

Volkanovski was diplomatic when asked about future challengers, but admitted that Chan Sung Jung, better known as The Korean Zombie, recently caught his attention after a post on Instagram.

“Afraid you’re going to get KO’d by the zombie mate?” wrote Jung, who finished Frankie Edgar in the first round in December.

“When you’re the champ, they’re going to do what they can,” Volkanovski said. “But at the same time, I know I’ll beat all these guys. Zombie, if he thinks he’s going to do to me what he did to Frankie, he’s dreaming. You come at me like that … I’ll put him to sleep.”

Volkanovski also addressed speculation that he could move up to 155 for a potential fight with UFC lightweight champion Khabib Nurmagomedov.

“I want to make it clear that I’m not out here chasing him,” Volkanovski said. “I’m not out here trying to avoid the contenders in my division. … But if these opportunities do come to me, and there’s money involved, I’d be silly not to take them.”

It’s safe to say that Eliot Marshall is building an MMA powerhouse in Denver.

While Marshall is a former MMA pro who went 3-3 in the UFC, he said on The Helwani Show that he’s still learning to separate the different aspects of being a fighter and leading one in a battle.

“It’s two different things. When you are the fighter, you are nervous for a really long time,” Marshall said. “You have this 8-to-12-week camp, whatever it is that you do, and you’re like man, I’m really scared right now. So you’re kind of used to the nerves. There’s that hard part of it, but as the coach, you’re not really that nervous until, boom, walk. Then you’re like whoa, woah, I don’t have any control over what’s going to happen right now.”

Marshall, however, knows he has something special with his team, and hopes it can bring home two UFC championships this year. But while titles are dandy, Marshall said there’s a bigger picture that he’s focused on with Team Elevation.

“I hope we have two straps by the end of the year,” Marshall said. “I think we could do it. That would be amazing. But what would be even more amazing for me, to be super honest with you, is that all of the guys on the team that we have now, that they have amazing lives. Even the ones that you don’t know. Even the ones that show up and train with the Corys and the Curtises and the Drews and the Neils … everyone doesn’t get to be Tom Brady. But Tom Brady needs those guys. My goal is to spread as much love and positivity in the world through martial arts so that we can all live better lives.”