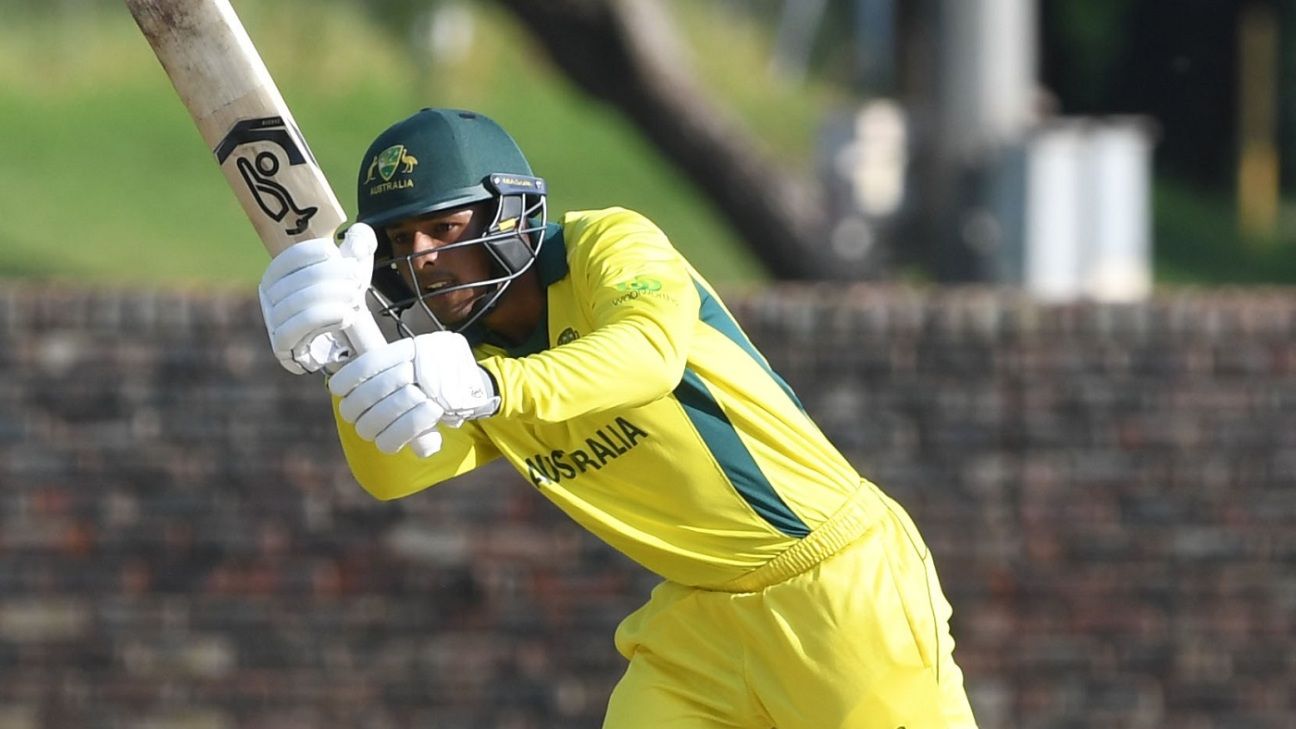 Tanveer Sangha had the game of his life, picking up four wickets with his legspin and then, perhaps more impressively, withstanding the pressure of a run-chase so well that he he hit the penultimate ball of the game for a thumping six to win it for Australia.

Sangha had done his bit to keep Afghanistan down to 191 for 7, the 18-year old responsible for how only one of the Afghanistan batters could make more than 25. That man, their captain Farhan Zakhil, finished unbeaten on 91 off 132 balls. It was a highly impressive effort in a thrillingly low-scoring game and its value became immediately apparent when Afghanistan had Australia at 2 for 3 at the start of their chase.

Sam Fanning, the opener who did very well to defy India recently, got together with Lachlan Hearne and steadied the ship but Afghanistan struck again, tugging the score down from 99 for 3 to 123 for 6 at the start of the 39th over.

Australia now needed 69 runs in 71 balls and into this cauldron walked Sangha and he promptly clattered 46 runs off 40 balls including five fours and that winning six. Prior to him, the best strike-rate from anyone in the game – having faced a minimum of 15 balls – was a paltry 76. Sangha made his runs at 115 all the while knowing the game was on the line and he couldn’t afford even a single mistake.

Legspinner Priviledge Chesa led the way in an all-round show by Zimbabwe, who overwhelmed Scotland in the 11th place play-off match.

Batting first, Zimbabwe maintained a good run-rate throughout the innings but it was the death that they really exploded, with 94 runs coming in the last 10 overs. Zimbabwe had good contributions throughout, and even though nobody made it to three figures, there were three half-centuries.

Tadiwanashe Marumani made 90 at the top of the order, Milton Shumba made 69 off 73 from No.3 and the two shared a 138-run stand in just 21.2 overs for the second wicket. Emannuel Bawa provided the thrust at the end with 56 off 36 from No.6. No Scotland bowler escaped punishment, with all of them going at greater than a run a ball, apart from Jasper Davidson who bowled only three overs.

Scotland’s chase was in trouble early and they didn’t have substantial partnerships. Allrounder Daniel Cairns was the only one who made it past a half-century, scoring 58 from No.6. Cairns was the ninth wicket to fall, becoming Chesa’s fifth victim. Chesa dismantled the Scotland middle order, sending them tumbling with figures of 5 for 49.

Potter confident Chelsea can still push for top 4
Kyle Jamieson, Will Young included in NZ XI squad to face England
‘The most unstoppable man in football’ is half of a legendary Chiefs duo
Dodgers extend new addition Rojas through ’24
Sources: Saints given OK to meet Raiders’ Carr