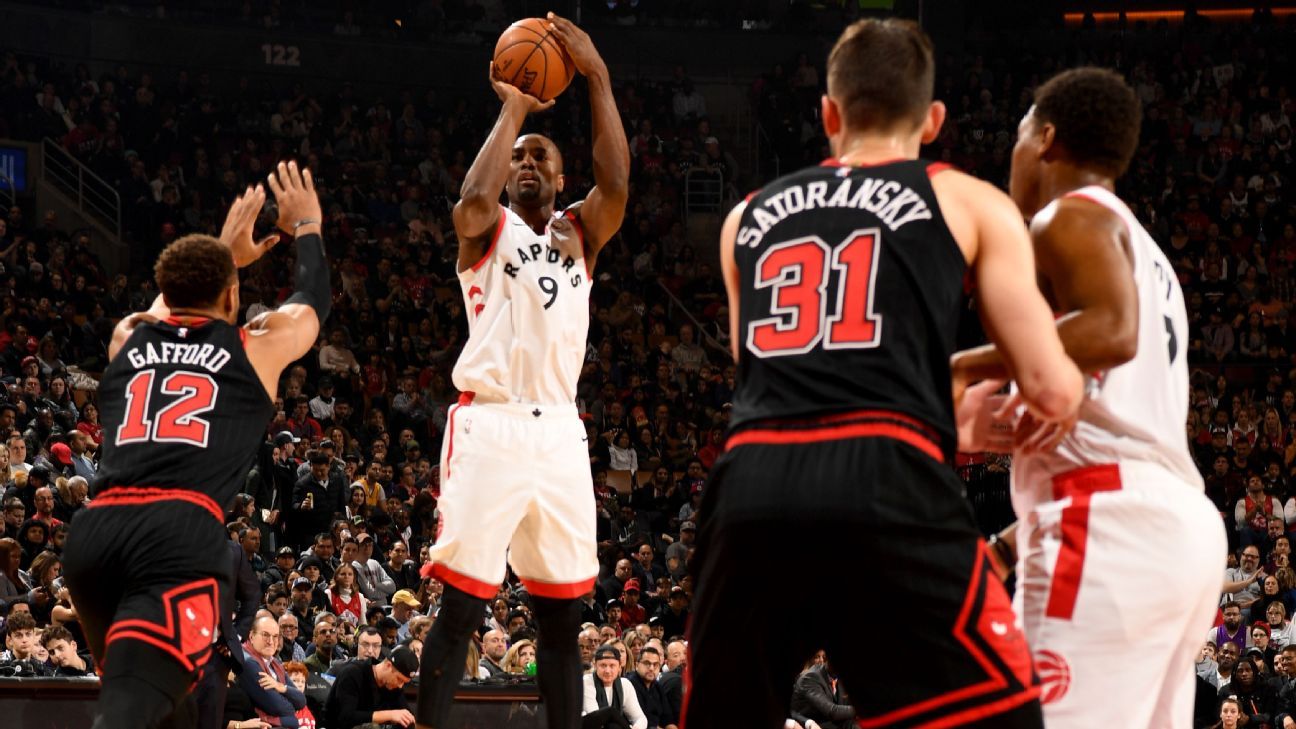 TORONTO — Terence Davis hasn’t forgotten about being passed over for a spot in the Rising Stars Challenge at All-Star weekend. Even so, the Toronto Raptors‘ rookie is just happy he’s playing for a contender.

Davis came off the bench to score a career-high 31 points and the Raptors tied a team record with their 11th straight win, beating the Chicago Bulls 129-102.

Pascal Siakam added 17 points, Serge Ibaka had 16, Chris Boucher 15 and Kyle Lowry 14 for the reigning NBA champions. The Raptors outscored the Bulls 69-39 in the second half to win their 12th consecutive meeting with Chicago.

Davis made a career-high 12 of his 15 field goal attempts, including 6 of 7 from 3-point range.

“The ball was going in, so I kept shooting,” Davis said.

Davis is the sixth rookie in Raptors history to score at least 30 in a game and the first to do it as a reserve.

“He’s reaping some of the benefits of all his hard work,” coach Nick Nurse said.

Davis said the All-Star snub was “definitely in the back of my mind” but insisted he’s content with the Raptors, who are second in the East.

“I’m not saying I wouldn’t want to play in the game, because it’s a special event, but I would rather play in the playoffs,” Davis said.

An undrafted rookie from the University of Mississippi, Davis had scored 23 points twice this season, most recently against Washington on Jan. 17. He surpassed that mark with a 13-point fourth quarter and received a hug from Lowry when he checked out with 3:12 remaining.

“It just shows you what type of team this is,” Davis said. “We all love each other, we care for each other, and I wouldn’t want to be anywhere else, honestly.”

Thaddeus Young fouled out with 21 points, and Zach LaVine had 18 as Toronto swept Chicago for the third straight season.

Chandler Hutchison scored 17 points, and Ryan Arcidiacono and Coby White each had 12 for the Bulls, who are 8-18 on the road.

The Raptors were without guard Norman Powell, who broke the ring finger on his left hand in Friday’s win at Detroit. Center March Gasol missed his third straight game because of a sore left hamstring. Both players are out indefinitely.

“With Norm being out, (Davis) is going to have an opportunity,” Lowry said. “He’s got to take advantage of it.”

Bulls guard Kris Dunn missed his first game of the season, with Hutchison starting in his place. Coach Jim Boylen said Dunn has been diagnosed with a sprained medial collateral ligament in his right knee.

Dunn was injured on the first possession of Friday’s loss at Brooklyn. He flew back to Chicago on Saturday to be evaluated by team doctors.

Bulls forward Daniel Gafford didn’t return after suffering an apparent injury on an awkward fall in the first quarter, but Boylen said afterward that Gafford was OK. Gafford had missed the previous nine games because of a dislocated right thumb.

Chicago led 63-60 at halftime, but Toronto reclaimed the lead with a 17-4 run over the first five minutes of the third.

“We dropped our heads a little bit in that third when the ball wasn’t going in and they made their run,” Boylen said.

Siakam scored nine points in the third, and Ibaka had eight as the Raptors took a 95-85 lead to the fourth.

“We threw it away,” a disappointed LaVine said. “Same story we do most of the games we lead at halftime.”

KNOCKING ON THE PLAYOFF DOOR

Chicago is ninth in the East, 3½ games behind Orlando for the final playoff berth. The Bulls have lost three straight after winning four of the previous six.

“When opportunity knocks, you’ve got to open the door,” LaVine said. “We just stood there. We might have jiggled the handle a little bit, but that’s about it.”

The Raptors won on Super Bowl Sunday for the fourth straight season.