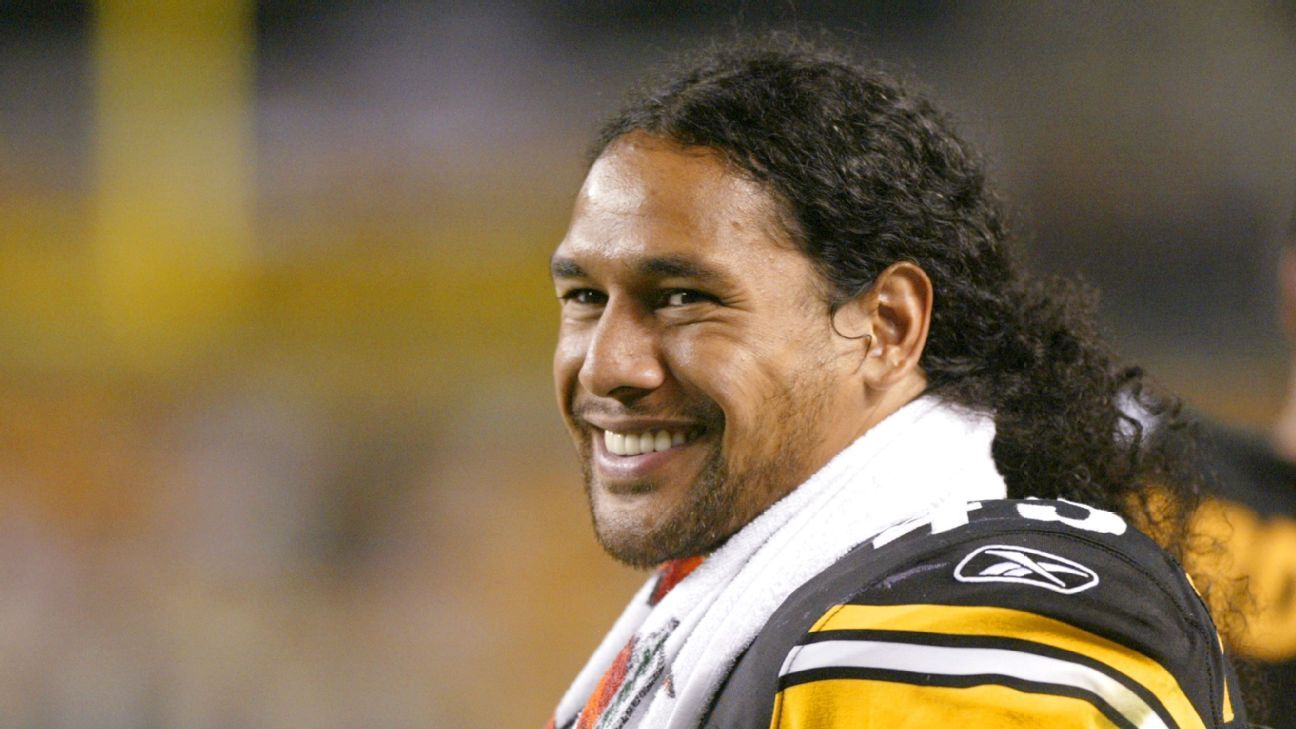 MIAMI BEACH, Fla. — The NFL’s 100th season has a Hall of Fame class fit for the celebration.

Two of the best safeties to play in the league, a record-setting wide receiver, a fiercely-competitive offensive lineman and a do-it-all running back were selected Saturday to be enshrined into the Pro Football Hall of Fame.

The five modern-era enshrinees were chosen by the Hall’s board of selectors and were formally announced during Saturday’s NFL Honors program. They will also be recognized during Super Bowl LIV on Sunday in Hard Rock Stadium.

The newest Hall of Famers will be formally enshrined Aug. 8 in Canton, Ohio.

Polamalu, who was an eight-time Pro Bowl selection and the NFL Defensive Player of the Year in 2010, was in his first year of eligibility for the Hall of Fame. Players must be retired for at least five years before they are eligible.

With former coach Bill Cowher and safety Donnie Shell having already been named as part of the Hall’s Centennial Class last month, the Steelers will be well represented at all of the celebrations later this year.

“Honestly, it’s just surreal,” Polamalu told the Steelers’ website. “I really feel surreal. I’m very thankful for all my teammates. This truly is a tribute to them. And I feel honored and unworthy of this, to be honest.”

Congratulations @tpolamalu. You were a true game changer every time you took the field. It was a joy and a pleasure to coach you and nobody is more deserving of being a first-ballot Pro Football Hall of Famer than you. So happy for you and your family.

Both the Class of 2019 (Champ Bailey, Tony Gonzalez and Ed Reed) and the Class of 2018 (Ray Lewis, Randy Moss and Brian Urlacher) had three players chosen in their first year of eligibility.

“Troy was the kind of player who was able to impact the outcome of games from his safety position,” Steelers president Art Rooney II said in a statement. “And he did it with uncanny instincts that made it almost impossible for opposing offenses to predict where he would be. … Troy was truly a playmaker every time he stepped on the field, and we couldn’t be happier for him.”

Atwater, a punishing tackler nicknamed the “Smiling Assassin,” was a first-team All Decade selection in the 1990s and started three Super Bowls in his career, including the Broncos back-to-back titles to close out the 1997 and 1998 seasons. The eight-time Pro Bowl selection had at least 100 tackles in six seasons.

“He was everything you could ever want as a player, as a man, as a leader, as a guy,” former Broncos coach Mike Shanahan said. “He could cover, tackle, prepare, not make any mistakes, everything.”

Shanahan has said Atwater’s performance in the Super Bowl XXXII victory over the Green Bay Packers was “one of the best games I’ve ever seen a guy play.” In the Broncos’ first Super Bowl win, Atwater had six tackles, a sack, a forced fumble and two passes defensed.

His Monday Night Football hit on Chiefs running back Christian Okoye in 1990 also still piles up views on YouTube.

Bruce was second all-time in yards receiving — behind only Jerry Rice — when he retired from the NFL in 2009, closing out a record-setting career that began with a 34-yard touchdown on his first NFL reception.

He was a key member of the St. Louis Rams’ “Greatest Show on Turf” offense, compiling eight 1,000-yard receiving seasons. Bruce was the first player in NFL history with at least 170 yards receiving in three consecutive games.

God is good and gracious to me! Tonight we rejoice in HIS faithfulness. St. Louis we headed to Canton!

The wait is finally over.

Hutchinson, a powerfully athletic guard who was named to seven Pro Bowls as well as the All Decade team of the 2000s, is one of just 12 guards in league history to have been named first-team All Pro at least five times.

He helped power two backs from two different teams to the league’s rushing title — Shaun Alexander in 2005 with the Seahawks and Adrian Peterson with the Vikings in 2008.

Hutchinson also was a technically sound player, as he once had a 44-game stretch when he was not flagged for a penalty that was accepted.

He also changed the way teams were able to sign free agents. The “poison pill” provision the Vikings put in a contract to sign him away from the Seahawks was never used again, as the league would not allow it after Hutchinson’s deal.

His reaction says it all…

Congratulations to @HutchSevenSix! The second member of the greatest offensive line in NFL history to be enshrined in the @ProFootballHOF. pic.twitter.com/J7C2HXUuVE

Peyton Manning, who was James’ teammate with the Colts for seven seasons, has praised James as a “complete back, a complete player.”

In addition to being an elite rusher, James had 433 career receptions and had great ability as a blocker.

“Edgerrin James is one of the greatest players this league has ever seen and absolutely deserves this enshrinement in Canton,” Colts owner Jim Irsay said in a statement. “Edge was the textbook definition of an every-down running back who could do it all, and we knew he was special from day one. … I know he helped put that shine back on the Horseshoe, and all of Colts Nation is extremely proud today.”

The five modern-era players in the Class of 2020 will be joined for enshrinement into the Hall of Fame in August by some of the 15 members of the Centennial Class, who were revealed in January and include former coaches Cowher and Jimmy Johnson and former commissioner Paul Tagliabue.

Those members of the Centennial Class who aren’t inducted in August will be enshrined at the league’s 100th year celebration in September in Canton, Ohio.