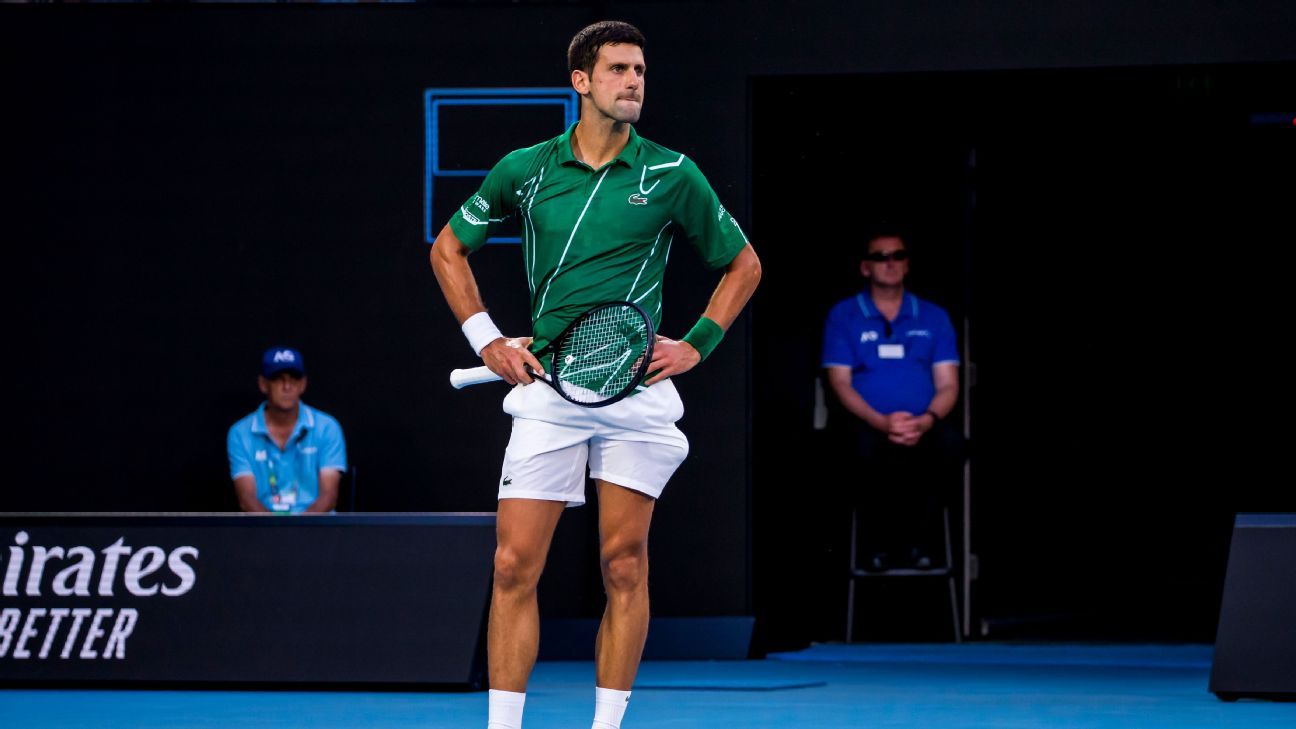 It was these four words that caused the first of two dramatic swings in the Australian Open men’s final on Sunday.

Novak Djokovic, the man who came into the match as a seven-time winner at Melbourne Park, had taken a tight first set against fifth seed Dominic Thiem before wrestling back a break of serve in the second to level things up at 4-4.

But after serving a double fault and falling behind 15-30 in the ninth game of the second set, everything began to unravel for the 16-time Grand Slam champion.

Djokovic took a few extra seconds to compose himself after the double fault and as a result was pinged by chair umpire Damien Dumusois for failing to serve the next point before the 25-second serve clock had expired. The first time violation may only come with a warning, but Djokovic was clearly angered by it. He instantly voiced his displeasure at the call, shaking his head in disbelief before throwing a piercing stare in Dumusois’ direction.

Thiem won the next point to carve out two break-point opportunities. Once again, Djokovic required a walk to the baseline to shake off the nerves, a towel to wipe the sweat from his brow. But the precious seconds continued to tick down, and Dumusois again handed down a time violation — this one costing Djokovic a first serve.

“He could have reacted better in that situation,” Djokovic later said of the penalty handed down. “That completely changed the momentum of the match.”

Thiem took advantage of the second serve, won the point and captured the break. He then raced to the other end of the court and quickly held serve to level the match at one set apiece.

Not 15 minutes later, Thiem had opened up a double break in the third set. Djokovic appeared to be a broken man. He was rattled. He was frustrated. He was dejected. He had never looked like this before on Rod Laver Arena, a court he has excelled on over the years.

Before long, Thiem was up two sets to one, and for the first time in the match he was the favorite to prevail. Djokovic trudged back to his chair as a roar for Thiem filled the arena.

“After I lost the second set I started to feel really bad. I was trying to keep myself alive mentally and emotionally,” Djokovic later reflected. “[After I lost the third set] I was on the brink of losing the match. My energy dropped significantly. I don’t know why.”

While ordinary men might have crumbled, Djokovic in Melbourne is a different beast. Somehow, he conjured a second, and ultimately pivotal, swing of the match.

Before the fourth set got underway, the Serb left the court for a medical timeout. He didn’t appear to be hampered by any type of injury, but a five-minute breather could only be a positive at this stage of the match. He returned to a special delivery from his player’s box: bananas and a mysterious pink drink, which Djokovic jokingly described later as “magic potions that my physio prepares in his lab. That’s all I can say.”

When he stepped back onto the court to begin the fourth set, instantly there was a new-found determination — something that had been lacking in the previous 90 minutes of tennis.

Djokovic’s trademark grit was back. He was covering the court with ease and tracking down balls he almost certainly would have left earlier in the match. This was the Djokovic that many tennis pundits consider to be the greatest player of all time. In the blink of an eye he was looking the more confident and competent man on the court.

While Djokovic’s level and intensity trended upward at a rapid rate, the fourth set remained on serve — a testament to the hunger Thiem, a two-time Slam runner-up, had for the match.

It took until the eighth game of the set for Djokovic to find a way to break the Austrian and go up 5-3, raising a clenched fist to the crowd. The set was now in his hands, and he made no mistake serving it out to tie it up at two sets apiece.

“Facing a break point early in the fourth was a critical point where things really turned around,” Djokovic said. “I started to accelerate on my serve, I started to move better and I felt an opportunity — I seized it.”

Just like Sofia Kenin against Garbine Muguruza in the women’s final the night before, there was no doubt who was winning a deciding set. Djokovic was full of running, while Thiem, who had spent five and a half extra hours on court during the course of the tournament, had to be dwelling on how close he had come to hoisting his first major trophy. He had to be wondering how Djokovic sparked himself back to life.

The early break in the final set went the way of the Serb. He held the advantage throughout, eventually serving out the match as the clock ticked over to an even four hours. For the eighth time in his career, Djokovic was the Australian Open champion.