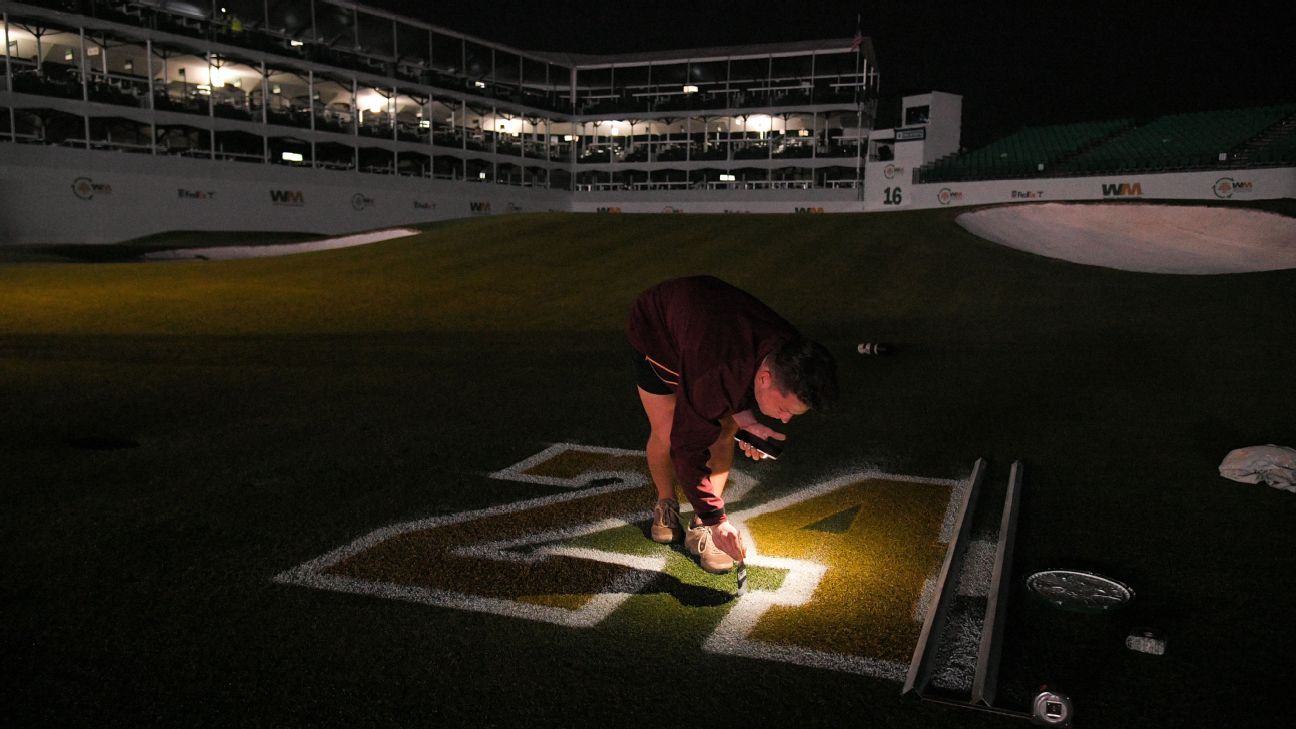 SCOTTSDALE, Ariz. — The PGA Tour will continue to honor the late Kobe Bryant on Sunday during the final round of the Waste Management Phoenix Open.

The tour reconfigured the hole location on the par-3 16th hole for the final round, so it sits 24 paces on to the green and eight paces from the left edge. Both figures represent Bryant’s jersey numbers he wore during his 20-season career with the Los Angeles Lakers.

Two other tributes will be more visible on the 16th hole Sunday.

The flag will be yellow and have the No. 8 on one side and the No. 24 on the other. Both numbers will also be stenciled in purple and gold on the grass in front of the green.

PGA Tour vice president of rules and competition Slugger White told the tour’s website that the new hole position is just “back a little further and a touch more left” than the traditional Sunday hole location. He also said idea for the flag came from someone in the organization’s Florida headquarters.

“We felt it was a nice touch and a touch of class,” he said.

Sunday’s tributes will be just the latest this week.

Homages to Bryant showed on the course at TPC Scottsdale throughout the week. Justin Thomas wore a replica of Bryant’s high school jersey from Lower Merion (Pa.) with the No. 33 and had his wedges stamped with “Black Mamba,” “Mamba Mentality,” “Kobe Bean Bryant” and “81 point.”

“I was getting new wedges anyway, so the timing worked out well to put some stamps on there for him,” Thomas said Wednesday. “I’ve always been a huge fan of his. I’ve always loved watching him play, just loved hearing about his work ethic and stuff that he did on and off the court and how he just always worked harder than everybody else, and it’s probably the reason — I mean, obviously, he’s freakishly talented but why he was better than everybody else because he was going to work harder to get there and just kind of will himself to be a winner.

“And that’s something that I hope to do when I’m out there playing, when I have a chance to win the tournament, I want to have that Mamba mentality, if you will, to try to close it out.”

Tony Finau wore a No. 8 Bryant Lakers jersey at the 16th hole on Thursday and wore purple and gold Nike golf shoes, which he’s had for five years but retired after the round. Max Homa wore a No. 24 Bryant Lakers jersey on No. 16. Gary Woodland and Bryson DeChambeau had the Nos. 24 and 8 on their shoes, and DeChambeau wore had No. 24 put on the back of his driver’s cap.

Other players had purple and gold putter covers in honor of Bryant.

“I think that’s awesome,” Rickie Fowler told the tour’s website. “It’s a cool gesture. You can’t do enough for what Kobe has done and the impact he’s had around the world.”