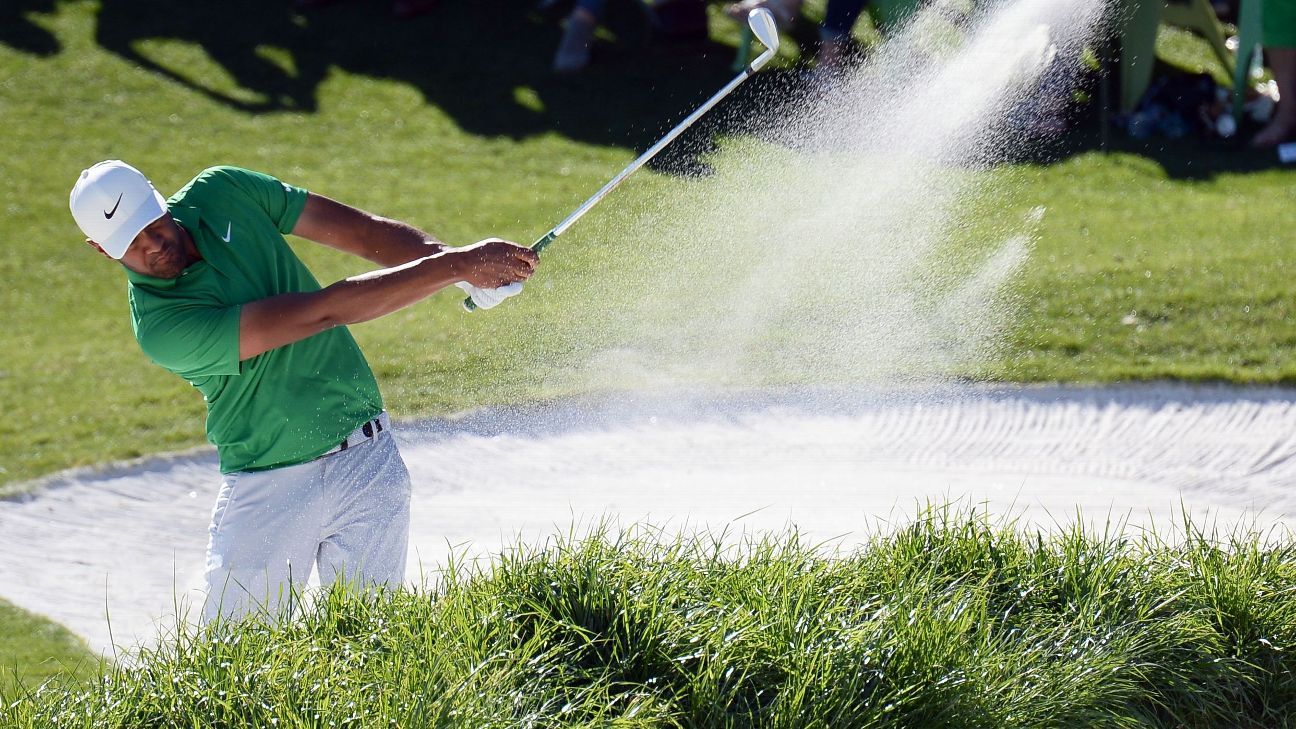 Finau shot a 9-under 62 on Saturday to take a one-stroke lead over Simpson in the Waste Management Phoenix Open, making an eagle on the par-5 13th and then, switching to a Kobe Bryant jersey for one hole, a birdie on TPC Scottsdale’s stadium par-3 16th.

“I had a perfect number for a sand wedge and go ahead and fire right at the pin,” Finau said. “Damn near made it. That would have been pretty sweet with the Kobe jersey on. But I like that shot. That was pretty nice.”

Second-round leader J.B. Holmes and Hudson Swafford were two strokes back. Holmes shot 70 and Swafford had a 66. Holmes won at TPC Scottsdale in 2006 and 2008 for the first of his five PGA Tour titles.

Finau began his back-nine charge with a birdie on 12, ran in a 20-footer for the eagle on 13, then settled for birdie on the par-5 15th after missing a 6½-foot eagle try.

After the birdie on the rowdy 16th, he three-putted for par from the fringe on the short par-4 17th — missing a 4-foot birdie attempt — and saved par on the par-4 18th after driving left into the first section of the church pew bunkers.

“I missed the one on 15 where I stuffed it in there and another one on 17,” Finau said. “It would be nice to have those back, I would have had the low round of my career. But it was a beautiful round of golf.”

The 30-year-old from Utah won the 2016 Puerto Rico Open for his lone PGA Tour title.

“I look forward to tomorrow, my game’s in a good place and I always tell myself, ‘Whatever happens, you’re going to learn from it and get better and stronger as long as it doesn’t kill you,'” Finau said. “I’m still standing here punching and I’m going to do that for the rest of my career. So, I got 18 holes to try and win this golf tournament and my expectation is exactly that.”

Simpson used a 7-iron on the 196-yard 12th. The ball bounced and rolled, turning slightly to right as it lost speed.

“We figured with all the adjustments and everything, playing 180 yards, which is a perfect 7-iron for me and as soon as I hit it I knew I hit a good shot,” Simpson said. “I quit watching it because I can’t see the green. I can’t really see that well, to gauge how far it was from the hole. I was looking at the crowd and they got more excited and then their hands went up. And at first my first thought was, ‘That couldn’t have gone in.’ And then it dawned on me they were really excited, so it was fun.”

He birdied 14 and 15, then saved bogey on 17 with a 20-foot putt after driving short and right into a bunker and taking three more shots to get on the green. He also scrambled on 18, making a 10-footer for par after driving into the right rough.

The 2012 U.S. Open champion has five PGA Tour victories, the last in the 2018 Players Championship. He lost a playoff to Hideki Matsuyama at TPC Scottsdale in 2017.

“The golf course has gotten more firm every day, so it’s going to be challenging tomorrow,” Simpson said. “But guys, I think, are still looking at it as plenty of birdie opportunities. This course is playing shorter, so we’re having shorter clubs in, even though the greens are more firm.”

Jon Rahm was tied for 11th at 10 under after a 68, playing alongside Finau. The former Arizona State star can jump from No. 3 to No. 1 in the world with a victory, provided top-ranked Brooks Koepka — tied for seventh with a round left in the Saudi International — finishes out of the top four.

“Can’t make a putt. If I could make a putt, I would be happier,” Rahm said. “But six back, hitting it good, I just can’t seem to roll it in and at this point it just seems like it’s a little bit too far to be able to make it up. This course, it isn’t as easy to make up distance.”

Billy Horschel, a shot behind Holmes entering the round, had a 73 to drop seven strokes back.

Wyndham Clark, the first-round leader after a 61, also was 9 under after a 74 in the final group with Holmes and Horschel.

Fourth-ranked Justin Thomas shot 69 to get to 8 under.

Defending champion Rickie Fowler was 5 under after a 69.