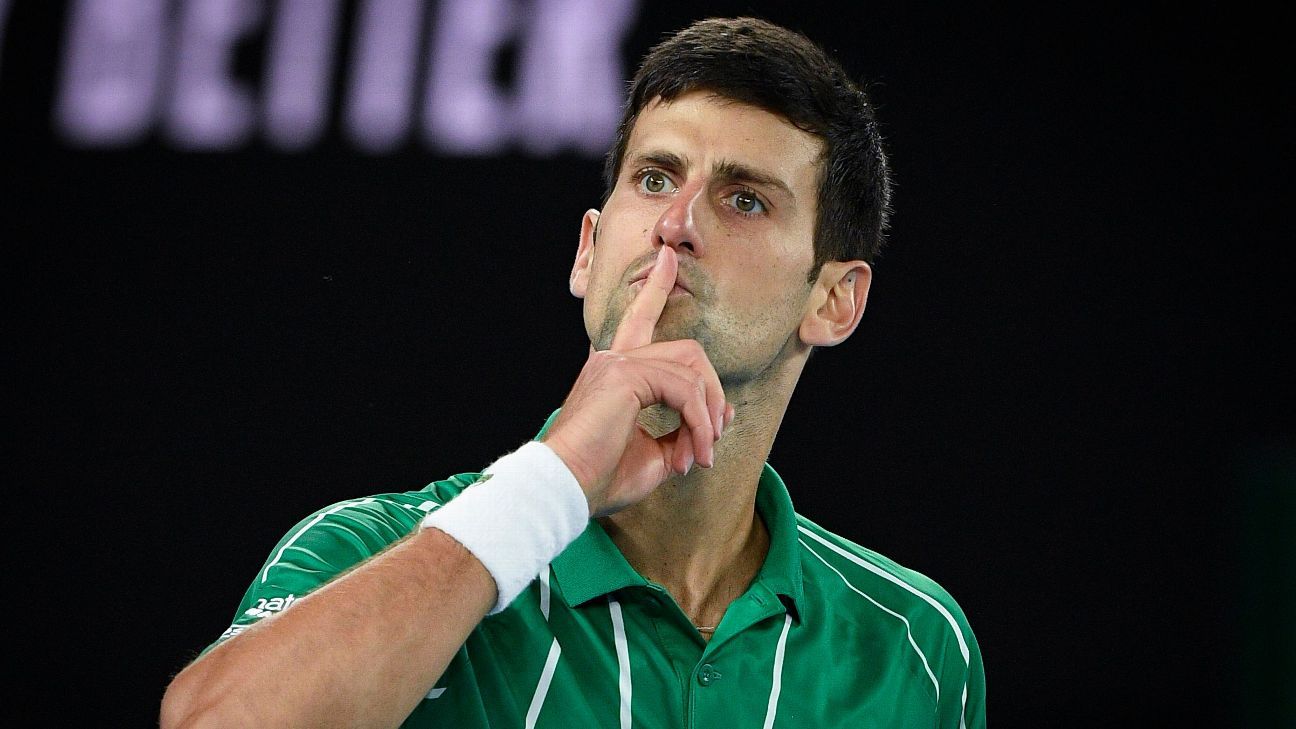 The last, crisp backhand Novak Djokovic fired in the fifth set of the Australian Open final on Sunday forced a match-ending error by Dominic Thiem. The shot signified what could be the beginning of the final phase of a three-way race to become the greatest of all-time in the men’s game.

Djokovic’s triumph was his eighth Down Under and the first time in eight matches that he recovered from a 2-1 deficit in sets in a best-of-five major final. The breakthrough also yielded his 17th Grand Slam singles title, bringing him within three of all-time men’s leader Roger Federer and two of Rafael Nadal. It appears that 2020 will be the pivotal year in the three-way struggle to eventually retire as the GOAT.

The wild card in this scenario is another three-way race, this one against age. Federer is 38, Nadal is 33. While Djokovic is the junior in the group (he turns 33 in May), he’s also in third place for Grand Slam wins. The urgency is equally distributed.

Whatever happens, it seems almost certain that none of these remarkable competitors will end up with a significant edge in the major title count. They’re so prolific that the title-count metric becomes less persuasive. It’s hard to claim hands-down GOAT status if you won, say, 22 majors but the other guys all have 20 or more as well.

For that reason, details pertaining to rankings, head-to-head meetings, unique achievements all become more important elements in a textured picture of their trivalry.

So let’s look at some of the other details, and the case for each man’s superiority in the great GOAT debate:

While Federer and Nadal have professed indifference to the challenge of holding the Grand Slam singles title record, Djokovic declared his ambition to earn that honor in no uncertain terms during the US Open last August. “You know, it’s definitely one of my ambitions and goals, if you want. I am 32 … but I still feel young inside and outside. And I still am very motivated to keep going and especially at this stage.”

It was a bold confession, but Djokovic was fresh off his majestic Wimbledon triumph and loomed as a co-favorite at the Open. That didn’t end so well. Nursing a sore shoulder, he retired after losing two sets in his fourth-round match with Stan Wawrinka. Later in the year, Nadal nosed ahead of Djokovic and snatched the year-end No. 1 ranking out from under his nose. That deprived Djokovic of a significant item on his GOAT application: a sixth year-end No. 1 finish, a feat previously accomplished by only Pete Sampras. Djokovic remains tied for second with Jimmy Connors, Federer and Nadal.

Djokovic has rebounded from that disappointment with a vengeance. He ran the table in the inaugural ATP Cup in January, going 6-0 in singles to lead Serbia to the title. He had wins in that run over, among others, Kevin Anderson, Denis Shapovalov, and — in the final — Nadal. His form was so commanding that he became a heavy favorite to win his eighth Australian Open.

While he accomplished that mission, Djokovic still has some heavy lifting to do. He has set the table for that effort. His .906 winning percentage in majors since turning 30 leads the entire ATP field. Although Djokovic’s been in just five finals compared to eight for Federer and seven for Nadal, he has won all of them.

A convert to a plant-based diet, Djokovic has embraced a way of life that borders on the ascetic. He looks ferociously healthy with no sign of having lost any of his trademark flexibility. He has lost just six of 64 matches at majors since turning 30.

The long-limbed Serb has seemed virtually unbeatable for long periods. His GOAT credentials also include the game’s third-longest winning streak in majors. He won 30 consecutive Grand Slam matches between Wimbledon of 2015 and 2016. He’s the only player in the Open era who has compiled three winning streaks of 25 or more matches in majors. No other Open-era player has won two majors after being down match points, as Djokovic did in the 2011 US Open and last year in Wimbledon. The loser in both matches: Federer.

Another big-ticket item on Djokovic’s resume: Djokovic is one of just three men to hold all four major titles simultaneously. Don Budge did it during the amateurs-only era. Rod Laver accomplished it twice, but just once in the more competitive Open era.

Federer fans will retreat into denial at this idea, but it looks almost like a sure thing that Nadal finish the night of the French Open men’s final as Federer’s equal with 20 major titles to his name. He has earned 12 of them in Paris, the most titles any player has won at a single tournament in the Open era.

Nadal’s preeminence on clay is the foundation of his status as the GOAT (he’s 93-2 in the French Open, 491-57 for his career on the slow surface), but that detail tends to diminish some of his other accomplishments. Those are all the more impressive considering the number of majors he was obliged to miss or was conspicuously compromised in because of injury. Neither Federer nor Djokovic can match his record as the only player with more than 400 wins on both hard and clay courts.

Nadal was forced to sit out eight majors since he first played one, seven more than Djokovic and three more than Federer. The most conspicuous example was another occasion on which Nadal was threatening Federer’s Grand Slam title record. In 2014, Federer had 17 titles. Nadal, coming off a terrific year, had 13. A win Down Under and the preordained French Open title seemed likely, but Nadal’s back locked up at the start of the Australian Open final, and the injury played an outsized role in his loss to Wawrinka.

Nadal is a almost five full years younger than Federer, but he’s already played seven finals since turning 30, just one behind Federer. He can also match Djokovic’s five Grand Slam wins at 30 or older.

The head-to-head stats are where Nadal stands out. He has dominated Federer in their series (24-16) and is nip-and-tuck with Djokovic. Nadal trails in that one, 26-29. Nadal also led Spain to five Davis Cup titles before last year’s radical makeover, with a 19-1 record in those best-of-five set singles matches. Nobody has won more of the prestigious ATP Masters 1000 titles than Nadal (35 wins).

Unlike either of his rivals, Nadal passed one of the most significant litmus tests for greatness when he won an Olympic gold in singles. He’s also just one of three players to win a major title in his teens, 20s and 30s (the other two are Ken Rosewall and Sampras). Djokovic has never won Wimbledon and the French Open in the same year. Federer did it in 2009, joining the company of Bjorn Borg, Laver and Nadal. But only Nadal and Borg completed that daunting task more than once.

Nadal has won at least one major title for 16 years running. As well as Djokovic has been playing, and as dangerous as Federer can still be on faster surfaces, Nadal’s resurgence in 2019 (he was 24-2 in the majors), his current lack of injury woes, and his superiority on clay put him in perhaps the best position to secure honors as the GOAT, even though he has downplayed the challenge.

“With my age and with my goals,” Nadal said, referring to his desire for career longevity after winning the US Open, “I cannot lose energy or time to [chase] the No. 1 ranking. I need to think about my career in a different way.”

Still the front-runner for most people in the GOAT derby, Federer appears to accept what once was borderline unthinkable: that either or perhaps both rivals will eclipse him in the final Grand Slam singles title tally. As he told reporters before the start of the Australian Open, “I enjoy playing, I still love it, and I hope I can still play a little longer. If I can add more Grand Slams, that’s great. But I’m not trying to fend off the others. If they pass me, that’s OK.”

Djokovic’s epic win over Federer at Wimbledon in July, and the Swiss champ’s subsequent struggles — and ultimate failures — in the ensuing two majors, suggest the last major title Federer won (the 2018 Australian Open) might well have been his last hurrah.

Whatever the future brings, one of the most remarkable chapters in tennis history was written by Federer in 2017 and 2018. Hampered by a bum knee following minor knee surgery earlier in the year, Federer was upset by Milos Raonic in the 2016 Wimbledon semifinals. He decided to take an extended break and did not play another match for the entire year. At 35, many wondered if we would ever see him again, never mind watch him accept the winner’s trophy at a major.

See him we did. Federer won the first Grand Slam he played upon his return in Melbourne in 2017, putting a temporary halt to the threat posed by Nadal. That day, Federer became the first male player to win at least five titles at three Grand Slam venues. It was the beginning of an amazing autumnal surge during which Federer padded his major titles lead over Nadal and Djokovic. It also forestalled the inevitable decline brought on by an age that had morphed from an advantage over his rivals into a rapidly swelling liability.

So, what if Federer hits the wall at 20 and ends up surpassed?

Federer already has the lowest Grand Slam match-winning percentage since turning 30 (.842), but he has also played in twice as many majors as Nadal (15) and 19 more than Djokovic. As they play more, Federer might end up looking better. But Federer’s winning percentage inevitably will drop further because he is unlikely to quit the game as long as he can continue to go deep into the second week at majors. In some ways, he could become the victim of his own excellence and longevity.

The head-to-head record doesn’t do Federer much good in the GOAT sweeps. Djokovic also leads him 26-23. Nadal’s pronounced advantage is somewhat deceptive, though, owing to the King of Clay’s 14-2 advantage in matches played on dirt (Federer leads 11-9 on hard courts, 3-1 on grass).

The past two majors indicate that Federer’s best, and perhaps only, chance to add another major title will come at Wimbledon. It’s still the most highly prized of the major titles, and that counts. Federer is 101-13 for his career in London with eight titles. Djokovic is next best at 72-10 with five wins.

Federer’s stake in GOAT territory is planted by his sustained, all-around excellence and versatility. Nadal proved a bridge too far on clay, but Federer still played five French Open finals (1-4, all losses to Nadal). He also has won the year-end ATP World Tour championships, both indoors and out on hard courts, a record six times. He has helped the Swiss to a Davis Cup win. About the only high-value target he hasn’t knocked down is an Olympic gold medal in singles.

The 237 consecutive weeks Federer spent at No. 1 from 2004-08 is a record, as is his 310-week cumulative stint on top. He’s currently tied with Rosewall as an eight-time major finalist after the age of 30, a record he might improve. Federer leads all players, male and female, in match wins in majors with 362. His claim to GOAT-hood will get a significant boost if he breaks one of the oldest and most important Open-era records, Connors’ single title count of 109. With 103 titles of his own, Federer could shatter the mark.

With the French Open coming up, the ball for the moment is in Nadal’s court. But it promises to be a long, thrilling year in the trivalry.