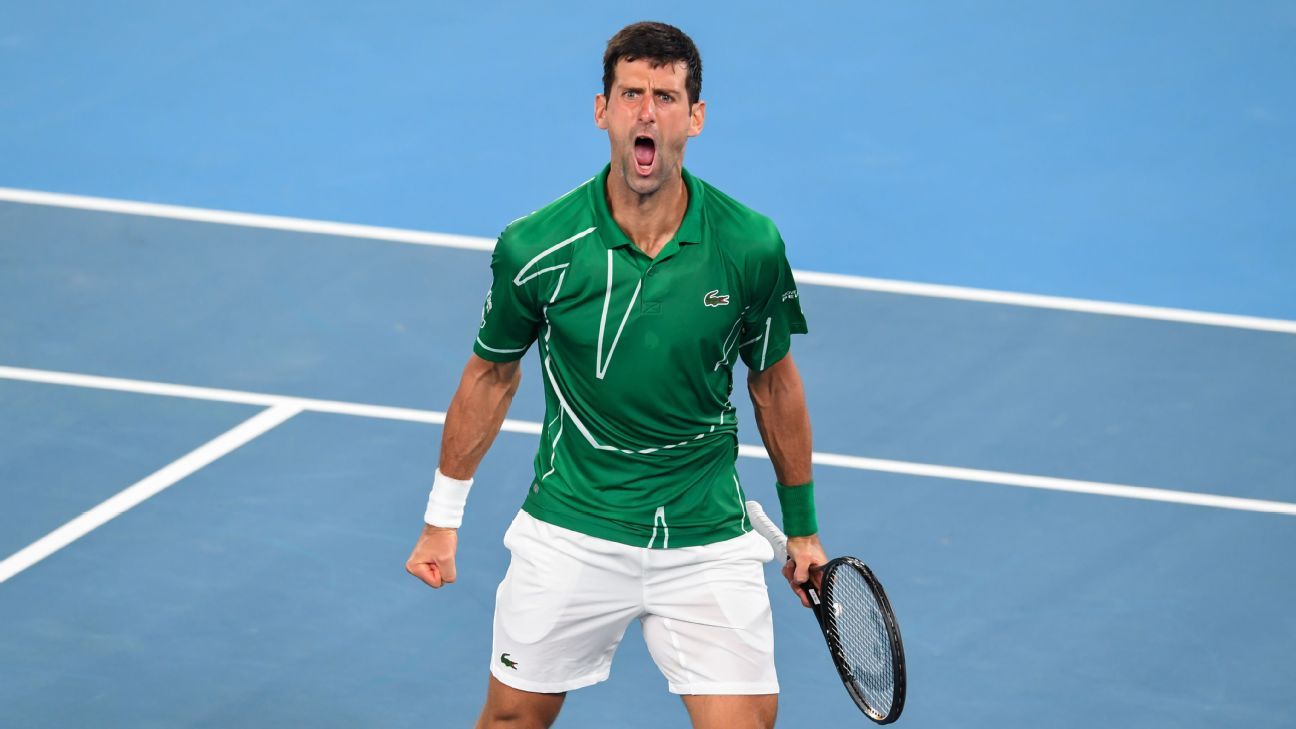 Djokovic did what he does, though. He refused to lose, waited for a chance to pounce and found his best tennis when absolutely necessary.

Only Roger Federer, with 20, and Rafael Nadal, with 19, have won more men’s Grand Slam singles trophies.

A little more than six months after saving a pair of championship points against Federer en route to winning a five-set Wimbledon final, Djokovic again showed that he can’t ever be counted out.

This victory improved Djokovic’s combined record in semifinals and finals at Melbourne Park to 16-0 and means he will return to No. 1 in the rankings, replacing Nadal in that spot.

No other man in the history of tennis has won this hard-court tournament more than six times.

It did not come easily this time for Djokovic, a 32-year-old from Serbia. He lost six games in a row in one stretch to Thiem, who plays a similar game and eliminated Nadal in the quarterfinals.

Djokovic was down two sets to one. He was visited by a doctor and trainer in the third set and, desperate to hydrate, guzzled bottles of water and energy drink. He lectured the chair umpire over calls for time violations.

This was not the dominant Djokovic who made a hard-to-believe total of nine unforced errors during his straight-set triumph over Nadal in the final a year ago. Djokovic eclipsed that total in the first set alone Sunday, with 14, and finished with 57.

It was a physical test offering plenty of entertaining exchanges, with 61 points lasting at least nine shots apiece.

Suddenly making a charge as his younger, less-experienced opponent faltered, Djokovic broke to lead 5-3 in the fourth set, helped by a sloppy volley into the net tape, a double-fault and a bad forehand by Thiem.

In the fifth set, another missed forehand by Thiem let Djokovic break to go up 2-1. Djokovic faced a challenge in the next game, when Thiem held a pair of break points but netted a forehand then sent a backhand passing try long. The spectacle would continue for another half-hour, approaching the four-hour threshold, but that was pretty much that.

He adds that haul to his five titles from Wimbledon, three from the U.S. Open and one from the French Open.

Thiem, an Austrian who is 26, was appearing in his third major final. He has lost them all, including to Nadal at Roland Garros each of the past two years.

Thiem was trying to become the first man born in the 1990s to win a Grand Slam singles title and was hoping to end the recent run of dominance by Djokovic, Nadal and Federer.

Instead, the Big Three have won 15 of the past 17 Australian Opens, 13 consecutive majors overall and 56 of the last 67.

Djokovic keeps gaining on rivals Federer and Nadal: This was his fifth trophy from the past seven Slams, going 5-0 in finals in that span.

Behind 4-0 in the third set, Djokovic merely watched and shook his head as a lob by Thiem curled over him and in. Djokovic didn’t chase it. Didn’t give his everything. It wasn’t entirely clear what the issue was, but perhaps at that moment, he knew he needed to save some strength for a push later.

Heat, so often a factor in Melbourne, was not an issue. The crisp, cool conditions were pretty much ideal at the start, with a light breeze and the temperature around 70 degrees Fahrenheit (20 Celsius). That dropped as the match went on and the natural light faded, first leaving a violet ceiling of sky before nightfall arrived, accompanied by alarmingly loud squawks from a flock of seagulls perched on steel railings atop Rod Laver Arena.

Not surprisingly, given his experience and expertise, Djokovic came out loose, limber and locked in. Of the initial half-dozen points lasting at least nine strokes, he won all six. Within 13 minutes, he was ahead 3-0, as a chorus of his nickname — “No-le! No-le! No-le!” — rang out intermittently.

Undaunted, Thiem displayed praiseworthy patience, and when Djokovic’s aim and focus betrayed him, this became a real contest.

Djokovic would look at his guest box, gesticulating or shouting. He slammed one ball in anger after a point. The biggest distraction of all came at 4-all in the second set.

Djokovic double-faulted to 15-30, then was warned by chair umpire Damien Dumusois for taking too much time before a serve. A poor drop shot found the net to set up break point, and Dumusois again cited Djokovic for letting the 25-second clock expire; the penalty there was a fault. A tepid 85 mph second serve followed, and Thiem took the game for a 5-4 edge when Djokovic flubbed a forehand.

As Djokovic walked to the sideline for the changeover, he tapped Dumusois on the left shoe, gave him a thumbs-up, then sat down and started pointing at the official and saying sarcastically, “You made yourself famous.”

That was part of a six-game run that gave Thiem the second set — Djokovic had taken 16 in a row since the opening round last week — and control of the third.

Just as it seemed Thiem might be on his way, Djokovic made a stand.