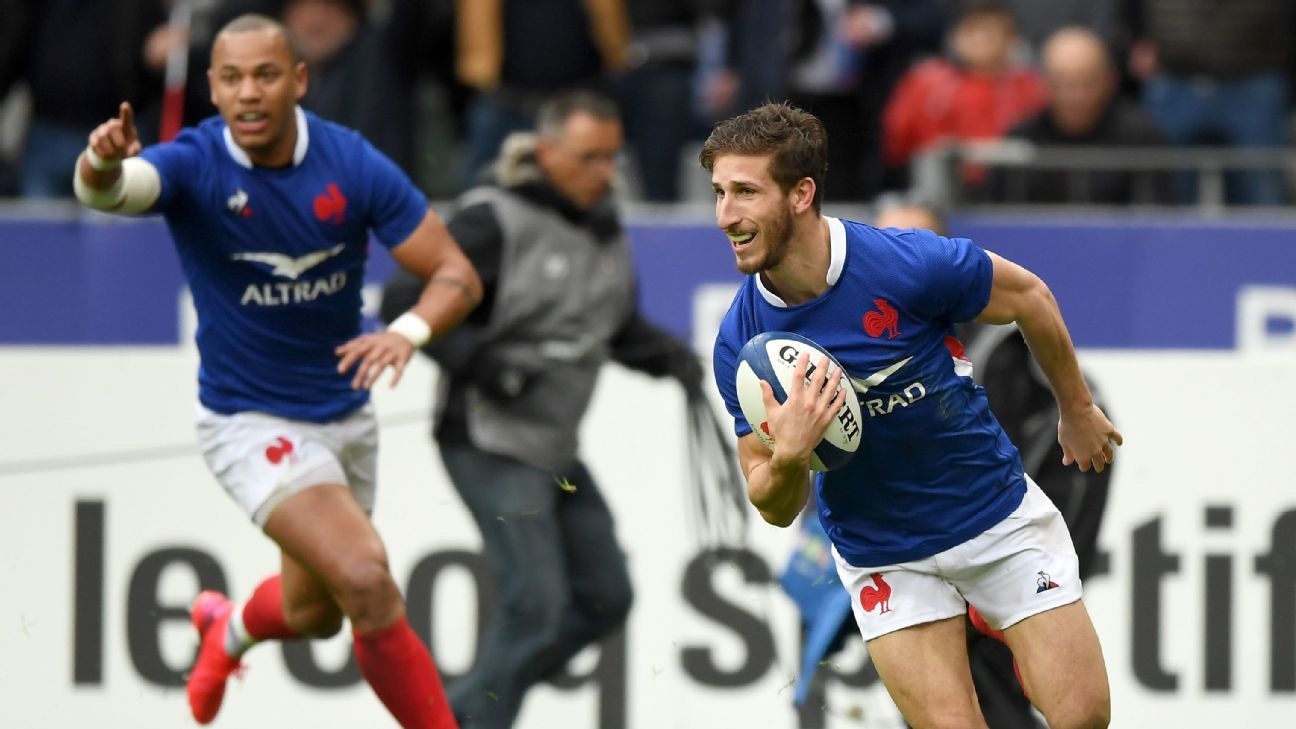 PARIS – England coach Eddie Jones warned that his side’s Six Nations match against Paris was going to be a brutal game. And he was right. But it was France handing out the brutality in the first 60 minutes as they dispatched England and started off their campaign with a performance of patience and precision.

France had been warned pre-match that Test rugby was no place for rookies. This current crop ignored that advice and made the best possible start to this new era under new coach Fabien Galthié.

After 78 minutes, the Stade de France was rocking to the beat of ‘Dupont, Dupont’ from the stands, in honour of their scrum-half. Antoine Dupont is 23, but his performance was as mature as it was thrilling. He kicked, passed and tackled England into submission, but was greatly aided by a clear game plan, and a back-row that marshalled the breakdown to give him the stage to orchestrate proceedings.

The only foot he put wrong was hoofing the ball out with 50 seconds on the clock. Perhaps it was the rib-rattling sound of Le Marseillaise from the stands, or the realisation he had just helped inspire France to a conclusive win over England. Even his teammates forgave him, giving him a ruffle of the hair.

For an hour or so — in unerring symmetry to their fateful World Cup final defeat by South Africa some three months ago — England were outthought, error-strewn and predictable. France played in-your-face rugby. England for a while looked as if they had forgotten how to play the sport.

For all the pre-match bluster from the England camp, this game revolved around France. They controlled the contact. They pulled the strings when it mattered. They created magical tries. They laughed in the face of those who say Test match rugby is no place for the inexperienced. France had fewer than 15 caps per man, but gave that gap in battle scars little credence.

Sometimes the greatest catalyst to kick-start a new era is to give the kids a chance. Sitting up in the heart of the Stade de France were the agents of this French revival whose blood runs red, white, blue in Raphael Ibanez and Galthié. But sitting alongside them is their trump card in Shaun Edwards, their new defence coach who signed off from Wales last year with a Grand Slam. This performance had his fingerprints all over it — brutal in defence and then applied and quick-thinking in attack.

France supporters and neutral lovers of the sport will have come away from this match in Paris smiling. For so long we have waited for a France team to stand up and show semblances of a long-term business plan. They have flattered to deceive in the past, rarely putting together a complete performance and doing their incredible pool of talent a gross disservice.

Personnel come and go, and what France have always lacked is stability. Prone to insurgence during a World Cup, they now seem more settled. OK, let’s not get too carried away — a win does not make a World Cup 2023 favourite this early on — but this feels more than just short-termism. A year ago, they were 16-0 up at halftime against Wales and lost. This year they were 17-0 up, held off the second-half fightback and powered through. “Solidarity” was the main quality Galthié earmarked.

Achieve that on a frequent basis and there’s something brewing here.

They shut down England at source, attacking the first receiver. Their width in defence forced England to go through the middle. Only as the game became more fractured did Jonny May get his chances to put his foot down and scorch to two tries. England could have won this match — they had the opportunities in the last 10 minutes — but the French defence stayed resolute and shut the game out. Dupont’s perfect tackle on Willi Heinz captured this entire performance.

But as the French crowd cheered images of their new-look coaching staff to the heavens, and Charles Ollivon strolled around the Stade de France as if he was this patch of land’s gatekeeper, you felt you were witnessing a new chapter in rugby for this part of the world. If and when France click, they are frightening, and they did so in a stadium lathered in branding for their home 2023 Rugby World Cup, taking their first steps forward in this quadrennial cycle.

The two teams came into this match from different places. England’s goal was to start their journey to answer Jones’ challenge of playing the best rugby the game has ever seen. France “wanted to win back the heart of the audience,” as Ibanez said afterward.

Both were intangible tasks but by the end of the match, it felt like you could touch the outpouring of love for this French performance. As the tricolour flags flew, the coaches were cheered and the France players soaked in this adulation, you felt one team had started a new journey and another was still struggling with a post-World Cup hangover.

England now head to Scotland with a six-day turnaround. Whatever narrative is created this week, they simply need victory at Murrayfield or risk this campaign descending into a grim experience. “Nothing changes,” Jones said post-match, but he will have to figure out why his team were so off-colour in the first half. He also needs to find an answer to their absence of physicality. They lacked the ball-carrying of Billy and Mako Vunipola, and missed Manu Tuilagi when he was forced off after 16 minutes. They don’t become a bad team overnight; their second-half fightback was impressive but it was a dismal first 40 minutes and that ultimately led to their downfall.

As for France, next up are Italy who got torn apart by Wales on Saturday. They should be aiming to do the same, continue this upward curve and they will make it comfortably two from two.

The true significance of this afternoon’s match will only be judged in four years’ time, when this stadium plays host to the World Cup final. But for tonight, Paris will enjoy the optimism around their team and bright young things. They were brutal at times, but also mixed in this delightful youthful exuberance and flair.

It was archetypal French rugby but the foundations were laid in organisation and, yes, solidarity.