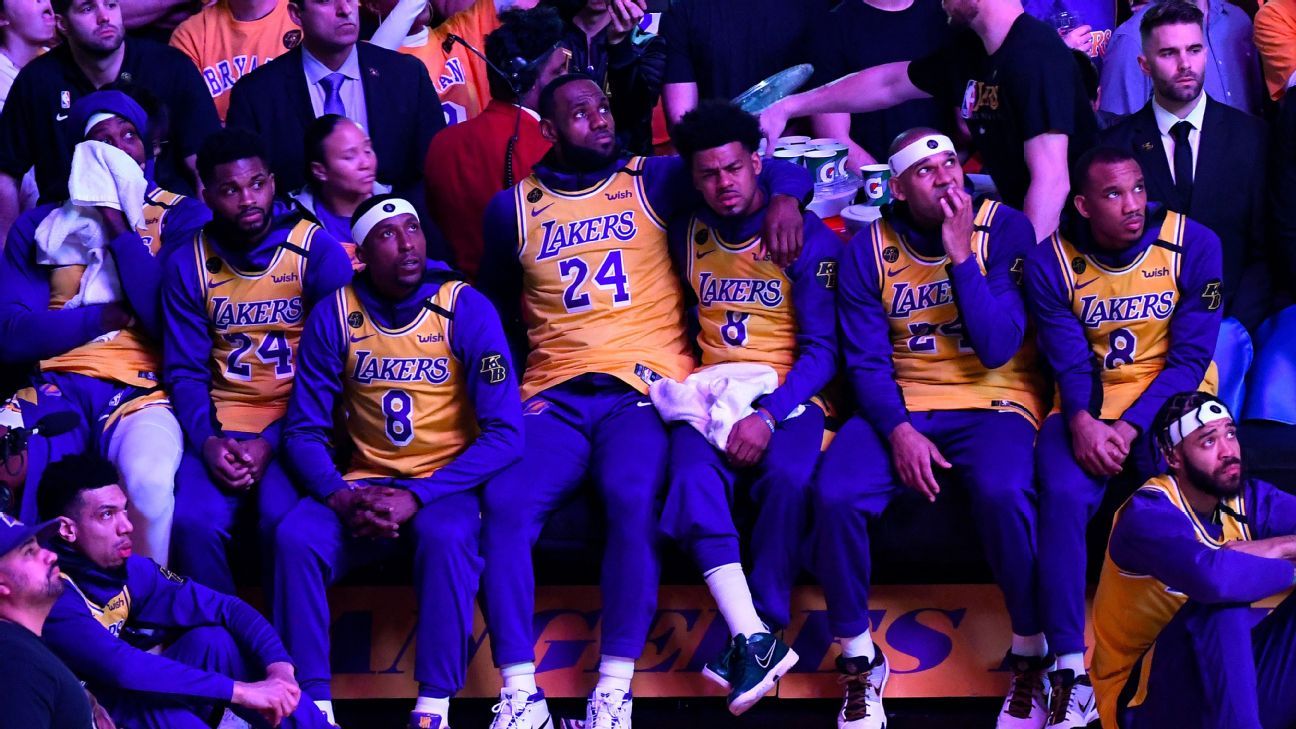 LOS ANGELES — There has never been an NBA game like the one that took place Friday at Staples Center between the Los Angeles Lakers and Portland Trail Blazers.

It has been five days since Lakers legend Kobe Bryant, his daughter Gianna and seven other people died in a helicopter crash in Calabasas, California. With the Lakers requesting to postpone Tuesday’s matchup with the LA Clippers, this was the Lakers’ first opportunity to honor Bryant in their home arena.

The Lakers lost 127-119, but the night was full of consoling and catharsis — from LeBron James’ pregame speech to Damian Lillard‘s emphatic, 48-point, 10-assist performance. These were the quiet moments from an emotional evening.

Staples Center seats are empty four hours before tipoff, save for the nearly 19,000 Lakers T-shirts draped over each chair — half with No. 24, half with No. 8. The house lights are down. At center court, one spotlight shines upon Los Angeles Philharmonic cellist Ben Hong, who, seated on a bench in a black shirt and pants, is rehearsing a beautiful rendition of “Hallelujah.” Directly over him on the video board, a tribute to Bryant plays.

“Once upon a time, I was a young basketball player,” Bryant begins, his voice carrying through the arena backed by the music.

High in the rafters, in the far corner where the Lakers’ retired jerseys hang, Bryant’s numbers are bathed in purple light. The scoreboards and shot clocks read 24.2 — a nod to the numbers for Bryant and his 13-year-old daughter, Gianna.

Ten minutes later, “Ko-be!” chants build outside in the heart of L.A. Live, where thousands are gathered. The air is perfumed with scented candles that have been burning since the crash Sunday.

Everywhere you step, there’s a message written for Bryant. The space is crowded, but strangers apologize if they bump into one another. They share stories about watching Bryant play. On the LED screens is a photo of Bryant and Gianna smiling from a front-row seat at a basketball game. The text reads, “Rest In Peace Kobe & Gianna Bryant,” along with the names of the seven others who died in the helicopter crash: John Altobelli, Keri Altobelli, Alyssa Altobelli, Payton Chester, Sarah Chester, Christina Mauser and Ara Zobayan.

Inside the arena, preparation continues.

Two hours before the scheduled tipoff, a team official walks toward two unoccupied courtside seats directly opposite the Lakers’ bench and drapes Bryant’s No. 24 Lakers uniform over one and Gianna’s No. 2 Mamba Academy jersey over the other. Another official tells a pair of nearby security guards that they are not to leave their posts unless someone relieves them.

Kobe and Gianna last sat in those seats on Dec. 30, when the Lakers hosted the Dallas Mavericks and Bryant trash-talked Luka Doncic in Slovenian. Along with the jerseys, a team official places a bouquet of red roses in each seat.

Soon after, a large media contingent moves toward a cavernous conference room in the bowels of the arena, a space that is usually reserved for news conferences during the playoffs.

Lakers head coach Frank Vogel emerges and addresses the crowd, wearing a black “KB” lapel pin on his shirt and a pair of Kobe’s signature sneakers. Looking on as Vogel speaks is Lakers VP of basketball operations Rob Pelinka, Bryant’s former agent and Gianna’s godfather. His face looks worn and heavy, on the verge of tears.

Pelinka stands there for only a beat while Vogel talks. Then he disappears into a back room.

Back on the court, as players continue to warm up, more media members, team officials and league execs gather around the court. Many hugs are exchanged, as are Kobe Bryant stories, including this one from Joe Rogowski.

Back in the summer of 2008, Rogowski, then the Orlando Magic‘s head strength and conditioning coach, received a call from the team’s general manager saying a player wanted to use the weight room at 6 a.m. the next day. Could Rogowski let him in?

Rogowski was surprised. It was the Fourth of July, and he was on vacation.

The next morning, he arrived at the facility, and there was Bryant, on vacation with his family but wanting to get a workout in before visiting theme parks with his wife and daughters. Bryant, who was coming off an NBA Finals loss to the Boston Celtics, engaged in a rigorous, one-hour weightlifting session and an hourlong shooting routine. He thanked Rogowski and asked if he could come in the next three days. Rogowski said yes, of course.

Afterward, Bryant sent Rogowski several pairs of sneakers and greeted him by name whenever they crossed paths. The next summer, Rogowski’s Magic met Bryant and the Lakers in the Finals — and Bryant won, capturing his fourth NBA title.

“Hey, Bryant put in the work, as always,” Rogowski thought. “He earned it.”

With tipoff nearing, Lakers center JaVale McGee starts playfully passing a ball back-and-forth with fans in the stands on both sides of the court. Cheers and laughter ring out.

After the musical tributes, the microphone belongs to Lawrence Tanter, who is in his 37th season as the Lakers’ public address announcer.

Tanter’s rock-solid baritone is as reliable as Los Angeles sunshine. But as his voice carries through the arena speaking of the “unthinkable tragedy” that claimed nine lives on Sunday, something happens. Tanter’s voice starts breaking subtly, as if something is slightly off. For anyone who has attended Laker home games over the years, the rarity of the moment is unmistakable.

During a timeout about six minutes into the first quarter, Lon Rosen embraces Pelinka just off to the side of the court. Rosen is Magic Johnson’s longtime agent.

Until Sunday, no moment had shaken the Lakers and the NBA as much as the November 1991 announcement that Johnson had tested positive for HIV. But Johnson survived, and Bryant, suddenly, is gone, marking a hard line between the two events.

During the break, Rosen places both hands on Pelinka’s shoulders, pulling him close while he speaks in Pelinka’s ear for several moments. The two men are now bonded in a way that only they can know.

As Rosen speaks, Pelinka nods, his gaze toward the ground, seemingly at the edge of tears the entire time. Later in the quarter, Pelinka returns to a seat near the tunnel behind the Lakers bench. He grasps both his arms tightly around his young daughter, Emery, and sits her atop his lap.

Lakers guard Quinn Cook returns to the court to shoot well after the loss. Lakers girls, wearing shirts bearing Bryant’s numbers, depart the arena with bouquets of pink roses. As they march through the Staples Center hallways toward the loading dock, they walk beneath a large sign that typically lists which teams will be playing that night but instead reads: “REST IN PEACE KOBE AND GIGI.”

Vogel again addresses the media. He played 13 players in the first half, tied for the most in a first half by any team the past 20 seasons. Vogel says he did so because the team is a family.

“We all shared this this week,” Vogel says. “We were all on the plane hearing the news.”

When asked what it will take for his team to move forward, Vogel pauses before answering.

Back in the Lakers locker room, the mood is quiet. LeBron James dresses at the locker that used to be Bryant’s. Above him hangs only one jersey: Kobe Bryant’s No. 24.