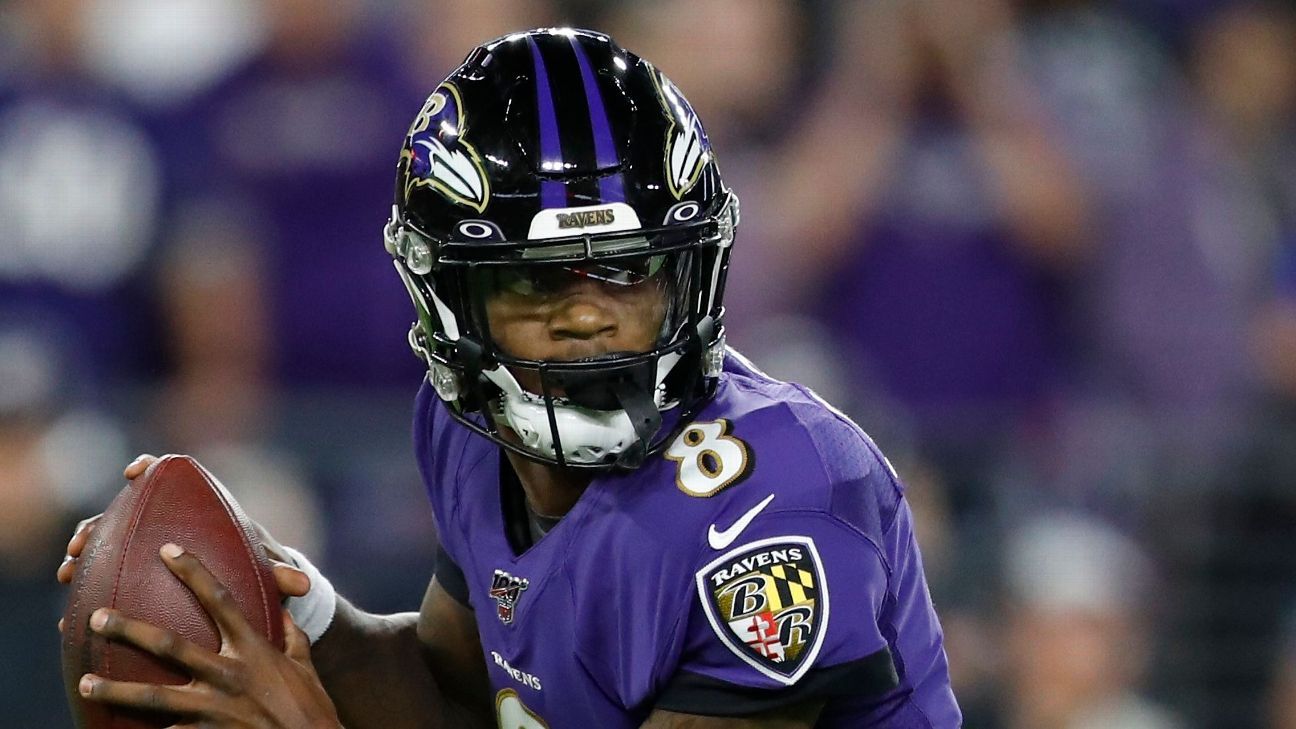 Baltimore Ravens quarterback Lamar Jackson went from being the last pick in the first round of the 2018 NFL draft to being recognized as the league’s top player 21 months later.

Not bad for this season’s most surprising and thrilling playmaker.

Jackson was unanimously named the NFL Most Valuable Player on Saturday night, delivering the ultimate stiff-arm to critics who wondered whether he could play quarterback in this league.

Jackson received all 50 votes from media members to join Tom Brady (2010) as the only unanimous choices for the award.

At 22 years and 356 days old at the end of the regular season, Jackson became the third youngest player to win the award. Only Hall of Fame running back Jim Brown, who was honored as NFL MVP in 1957 and 1958, was younger than Jackson.

“He’s a beast,” Ravens running back Mark Ingram said. “I feel like he’s going to be the greatest one day.”

In his first full season as an NFL starting quarterback, Jackson redefined the game’s most important position, becoming the first player in league history to produce over 3,000 yards passing and 1,000 yards rushing in a single season. He frustrated defenses with his blazing speed and strong arm, leading the NFL with 36 touchdown passes and setting the league mark for rushing yards by a quarterback with 1,206.

Jackson sent a message with a soaring 83-yard touchdown strike to Marquise “Hollywood” Brown in the season opener in Miami. He then stamped himself as the MVP favorite with that 47-yard touchdown run in Cincinnati where he unleashed that jaw-dropping spin move.

Amid chants of “MVP” at home as well as at road stadiums, Jackson carried the Ravens to a franchise-best 14-2 record and the team’s first No. 1 seed. But Jackson and Baltimore suffered a 28-12 upset loss to the Tennessee Titans in the divisional round.

Jackson is not just the first Ravens player to capture the NFL MVP award. He is the first Baltimore player in 16 years to receive a single vote (Jamal Lewis and Ray Lewis).

“He comes to work every single day, and football is No. 1 in his life,” Pro Bowl guard Marshal Yanda said. “Some guys that come through, they like what the game gives them, but they don’t necessarily like the game all the time. This kids loves football.”

During the regular season, Jackson was virtually unstoppable, orchestrating the NFL’s highest scoring offense. He recorded one of the best seasons ever by an NFL quarterback with his ability to shred defenses by juking defenders or throwing darts to the end zone – and sometimes doing both on the same play.

Jackson is the first quarterback since 1940 to be the leading rusher on a team that finished the regular season with the best record, according to the Elias Sports Bureau. He is also the only quarterback to top the NFL in touchdown passes and finish in the top 10 in the league in rushing yards (he was sixth).

To put his season in perspective, take a look at this:

While he was deemed the MVP frontrunner for the second half of the season, Jackson represented one of the biggest question marks in the 2018 draft. Some analysts wondered whether Jackson should switch positions. A scout for the Los Angeles Chargers even asked Jackson at the NFL combine that year whether he was going to participate in wide receiver drills. An anonymous ACC coach told Sports Illustrated that Jackson “has no shot at playing quarterback in the NFL.”

Concerns with his accuracy, pocket awareness and reliance on running caused Jackson to fall to the No. 32 pick in the first round (and fifth quarterback selected). As a rookie, Jackson guided the Ravens to the AFC North title after taking over for the injured Joe Flacco around the midway point of the season.

But Jackson did most of his damage with his legs, which fueled skepticism whether he could ever become a legitimate passer in the NFL. In June, Jackson’s odds of winning NFL MVP were 60-to-1, the same as Jameis Winston and Marcus Mariota.

In the season opener, Jackson threw five touchdown passes and recorded a perfect passer rating (158.3) in a 59-10 win in Miami. Asked if he had silenced the doubters, Jackson famously responded, “Not bad for a running back.”

Jackson has a way of proving doubters wrong, doing so at a record pace.

At Louisville, Jackson became the youngest to win the Heisman.

As a rookie in 2018, he became the youngest quarterback to start an NFL playoff game.

This past season, Jackson became the youngest quarterback to start at Pro Bowl.

And, on Saturday, he became the youngest quarterback to win NFL MVP.

“There’s not another quarterback in the league like him,” New England Patriots coach Bill Belichick said.

Jackson headlined a big night for Baltimore. John Harbaugh became the first NFL Coach of the Year in Ravens history, and offensive coordinator Greg Roman received the Assistant Coach of the Year award. Harbaugh guided the Ravens to a team record 14 win and the franchise’s first No. 1 seed.

The Ravens became the first team to capture MVP and Coach of the Year in the same season since the Carolina Panthers in 2015 (Cam Newton and Ron Rivera).

The New Orleans Saints’ Michael Thomas edged out Jackson by two votes to became the second wide receiver to earn the Offensive Player of the Year award, joining Jerry Rice (1987 and 1993). Thomas set a single-season league record with 149 receptions this season.

New England Patriots cornerback Stephon Gilmore became the sixth cornerback to win Defensive Player of the Year and the first since Charles Woodson in 2009. Gilmore, whose six interceptions tied for the NFL lead and his 20 passes defensed topped the league, is the first Patriots player to win this award.

The top two picks in this year’s draft lived up to the hype as Arizona Cardinals quarterback Kyler Murray was named Offensive Rookie of the Year and San Francisco 49ers defensive end Nick Bosa was awarded Defensive Rookie of the Year. Murray joined Cam Newton as the only rookies to total over 3,500 yards passing and 500 yards rushing, and Bosa recorded nine sacks. It’s the fourth time that the top two picks in the draft won Offensive and Defensive Rookie awards, according to the Elias Sports Bureau.

The Comeback Player of the Year award was given to Tennessee Titans quarterback Ryan Tannehill, who beat out 49ers quarterback Jimmy Garoppolo by one vote.