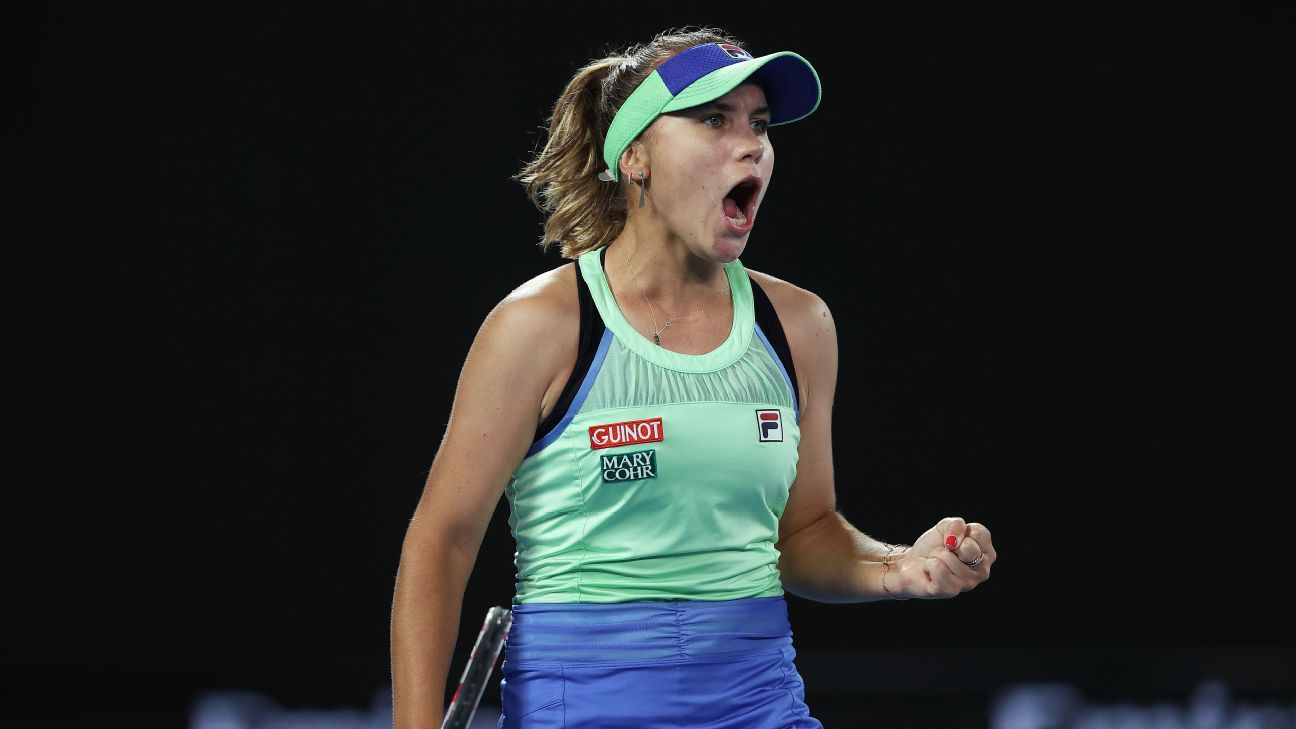 MELBOURNE, Australia — This, essentially, was where Sofia Kenin was going to win or lose the Australian Open final: She was down love-40 while serving at 2-all in the third set against two-time major champion Garbine Muguruza.

Kenin came through in spectacular fashion. She won the next five points, each with a winner — one an ace, the others clean groundstrokes to cap exchanges of 11 shots or more.

The American wouldn’t lose another game on her way to earning a Grand Slam title at age 21.

Demonstrative as can be — whether spiking a ball, dropping her red-white-and-blue racket or slapping her thigh — the 14th-seeded Kenin won the first major final of her career Saturday by coming back to beat a fading Muguruza 4-6, 6-2, 6-2 at Melbourne Park.

“This is my first speech, but I’m going to try my best,” Kenin said during the trophy ceremony at Rod Laver Arena, where the retractable roof was shut because of rain much of the day.

“My dream has officially come true,” she told the crowd. “Dreams come true. So if you have a dream, go for it, and it’s going to come true.”

Kenin was so magnificent when it mattered the most, saving 10 of 12 break points she faced, while converting 5 of 6 that she earned.

Muguruza, meanwhile, seemed hampered in her movement and, in particular, her serving: She helped Kenin by double-faulting eight times, including three in the last game, one on championship point.

Kenin immediately covered her face with both hands.

For quite some time, she was overlooked and underappreciated, drawing much less attention than other young tennis players from the U.S., such as 15-year-old Coco Gauff — Kenin beat her in the fourth round this week — and 18-year-old Amanda Anisimova.

Kenin will be taken more seriously now. By everyone.

With her father, Alex, who also coaches her, watching nervously in the stands, Kenin became the youngest Australian Open champion since 2008, when Maria Sharapova won the hard-court tournament at age 20.

Kenin is expected to rise to No. 7 in Monday’s WTA rankings, the youngest American to make her debut in the top 10 since Serena Williams in 1999.

“Those people that didn’t believe in her, they had very valid reasons not to, because she’s always been the smallest one,” Alex Kenin said the day before the final. “But I guess, thank God, I saw something that they didn’t. Because I know her better. I feel pretty happy. I guess I was right.”

In the men’s final on Sunday, defending champion Novak Djokovic will face Dominic Thiem, a 26-year-old Austrian who was the runner-up to Rafael Nadal at the French Open the past two years. Djokovic seeks a record-extending eighth title at Melbourne Park and 17th major trophy overall; Thiem is trying to become the first man born in the 1990s to win a Grand Slam title.

Kenin was born in 1998 in Moscow to Russian parents; they had moved to New York in the 1980s, but returned to be with family for the birth of their daughter. A few months later, they returned to the U.S.; Kenin grew up in Florida and still makes her home there.

Muguruza came into the day with a far more formidable record. She has been ranked No. 1 and won the French Open in 2016 and Wimbledon in 2017 — the only woman to beat each Williams sister in a Grand Slam final.

But she tumbled out of the top 30 last season because of so-so results and was trying to become only the third unseeded champion at the Australian Open in the professional era, which began in 1968.

Muguruza put on her game face from the moment she walked through the tunnel leading to the court. She didn’t even spare a smile for pre-match photos up at the net with a grinning Kenin.

And when she made her first move in front, breaking to go up 2-1 after 15 minutes, Muguruza just fiddled with her strings and tucked her racket under her left arm like an old-school commuter with a folded newspaper on the way to catch a subway train.

Kenin makes her mood obvious at all times.

After lost points, she bounced her racket or kicked it, rolled her eyes, muttered to herself. After winning points, she would pump a fist and scream “Come on!” — or, when she went up 5-2 in the second set, Kenin grabbed a tennis ball and slammed it off the blue court. Did that again later, too, as the end neared.

While Muguruza generally stuck to her preferred tactic of hit-’em-hard, harder, hardest — not a ton of nuance — and moving forward when an opening demanded it, Kenin put more shape and spin on balls, and turned to her favorite element, drop shots, when possible.

Muguruza took the last two games of the opening set to move in front.

Kenin left the court after that, and when she returned, the match’s direction switched completely.

Her play elevated somewhat, yes, but the biggest change was that Muguruza’s level dropped. Her serve percentage and speed dipped. Her footwork was problematic.

Kenin broke to go up 3-1 and again to force a third set. During the ensuing break, Muguruza was visited by a trainer, although it wasn’t clear exactly why.

Kenin stood her ground at that key juncture at 2-all in the third, holding there and then breaking immediately. Soon enough, she was kissing the trophy, just as her father had kissed her on the cheek right before the walk from the hallway outside the locker room to the court.

“This was the best two weeks of my life. I thank my team, my dad, everyone who made this possible — my mom back home, who’s probably watching this speech. I love you, Mom,” Kenin said. “We worked so hard, and I’m so grateful for this.”