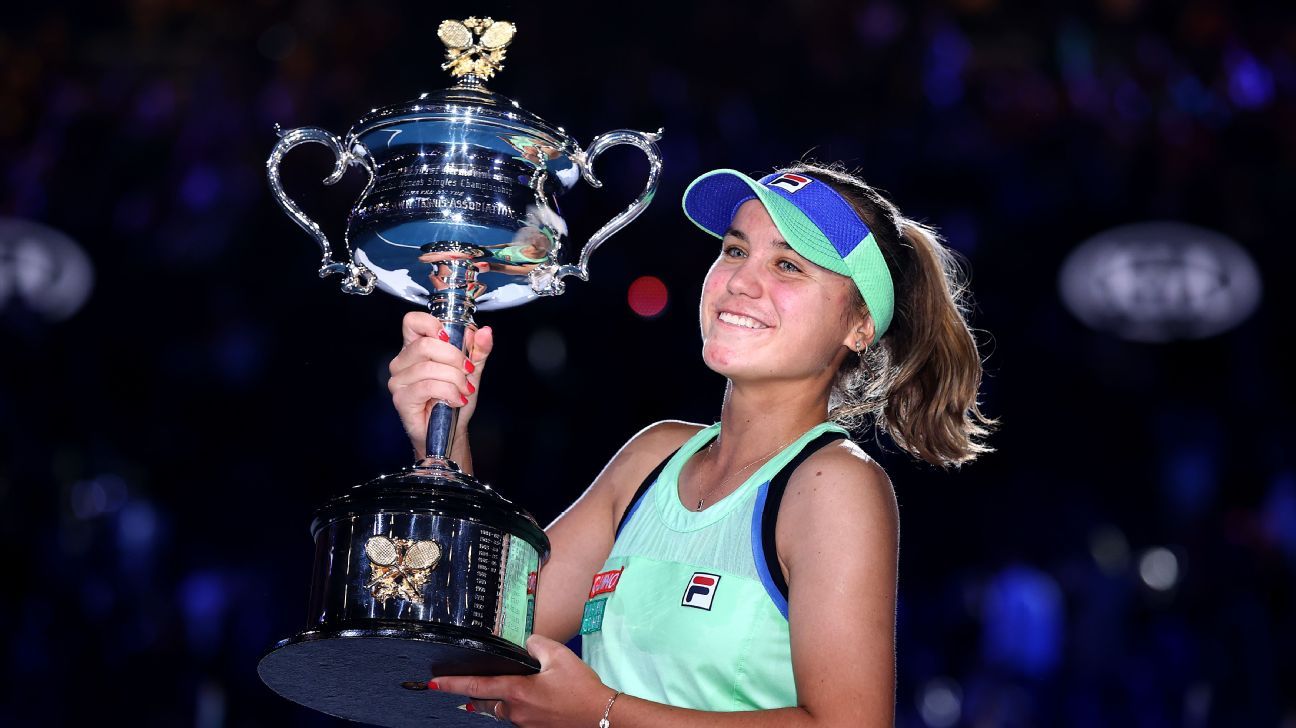 MELBOURNE, Australia — Sofia Kenin came to the year’s first Grand Slam as a player to watch — a rising American placed in the toughest quarter of the draw — but without many expectations.

She left it the sport’s newest superstar.

After an impressive run to the finals that included knocking off world No. 1 and hometown favorite Ashleigh Barty in the semifinals and 15-year-old sensation Coco Gauff in the fourth round, the No. 14-seeded 21-year-old stormed back in Saturday’s championship match after losing the first set to unseeded Garbine Muguruza, a two-time major champion.

Despite being down, Kenin never seemed scared. Her self-belief poured out of her like sweat under the closed roof on Rod Laver Arena. She simply adjusted her game and refused to lose. Kenin ran down, and reacted to, every single point as if it was match point and the one that determined her fate.

She shouted at her box, slammed down her racket, threw up her arms in wild disbelief — and that was for the points she won. Kenin was relentless in her pursuit, and she found a way to return virtually every ball hit her way down the stretch. Muguruza became increasingly less responsive and appeared paralyzed by nerves at times, notching 45 unforced errors in the match. Kenin would not, could not, be stopped.

Serving in the fifth game in the third set, Kenin trailed 0-40 and looked as if she was about to go down a break in the decider. But then she rattled off five straight winners — one an ace — to take the game and change the course of the match — and her career.

“That’s the game I feel like changed things,” she said later. “I had to play some [of my] best tennis. I did … I knew I needed to come up with the five best shots of my life.”

She didn’t lose a game again. It ended on a double fault by Muguruza — her third of the game and eighth of the match. Kenin needed a moment to realize it had ended. She was a Grand Slam champion following a 4-6, 6-2, 6-2 victory in just over two hours.

She dropped her racket, as she had after so many matches during her Cinderella run, and put her head in her hands to hide the tears from falling down her face. She stood there motionless for a few seconds as the crowd stood and cheered in loud ovation. After she hugged Muguruza, she hurriedly made her way to her father, Alexander, who has been her primary coach since she began playing the sport. He leaned over from his seat, and the two embraced as cameras flashed all around them.

“My dream has officially come true,” she proclaimed to the crowd during the trophy presentation, her father filming it all on his phone. “I can’t describe this feeling. I’m so emotional. If you have a dream, just go for it and it will come true.”

Said by anyone else, her words may seem ridiculous, perhaps childish or misguided. But from Kenin, it was clear she believed it wholeheartedly.

Born in Russia, she moved with her parents to the United States as an infant. Kenin started in the sport as a 5-year-old and quickly became a prodigious talent. Alexander, himself a recreational player, began coaching her, following the model set by fellow Russian Maria Sharapova and her family. Hoping to seize on every possible opportunity for his young daughter, Alexander help create a website for Kenin and sought ways to get in the spotlight. Based in Florida, it wasn’t long before she became somewhat of a known figure among very young players in the country and proof of her interactions with some of tennis’ biggest stars of the time are all over the internet.

Garbine Muguruza says she wants to stay positive after Sofia Kenin loss at the Australian Open.

Kenin made her Grand Slam debut in 2015 at the US Open as a result of winning the USTA junior national championship. She became a fixture on the WTA Tour in 2017. She had her breakthrough season last year, winning three titles and reaching her then-career best ranking of No. 12 to end 2019, as well as being named the WTA’s most improved player. She reached the fourth round of a major for the first time at the 2019 French Open after beating Serena Williams, one of her heroes. Earlier this week, she claimed that was the match that gave her the confidence to know she could compete against the best in the world.

And on Saturday, she joined Williams and Sharapova in the record books, becoming the youngest American to win a major since Williams in 2002, the youngest to win in Melbourne since Sharapova in 2008, and just the fourth woman in the history of the Open Era to earn their first Grand Slam title after dropping the first set. She will officially become the top-ranked American for the first time on Monday when she takes over the No. 7 spot — two places ahead of Williams. It still doesn’t feel real for her yet.

“It hasn’t sunk in yet,” she said. “Everything is just still a blur for me. I just can’t believe what happened. It’s just great. I feel like I’m doing some great things for American tennis. It’s such an honor.

“I’ve watched Serena, I’ve been following her, all the Slams she’s been winning. It’s a special feeling just to be ahead of her. I’m just super excited.”

Collecting a check of $2.76 million (AU$4.12 million), Kenin almost doubled her career earnings overnight. She told doubles partner Bethanie Mattek-Sands in a video interview after advancing to the finals, she would be buying herself Cartier diamonds with her newfound wealth. She jokingly confirmed that after the match.

While she says she always believed she could win a major title, the purchase was not something others in the sport ever predicted she would be able to make right now. Her name was largely glazed over by fans and members of the media when the draw was announced. She had two second-round results in her lead-up events, and she was lost in the hype surrounding Williams’ quest for 24 major titles, Gauff’s emergence, Barty’s quest to become the first Australian to win a singles title at the tournament since 1978, Caroline Wozniacki‘s retirement and a slew of other compelling storylines.

But it was Kenin who was the last woman standing, somehow both improbably and expectedly if one considers her dramatic rise over the last year. Billie Jean King, the seven-time major champion and godmother of women’s tennis, congratulated Kenin on her victory with a tweet.

Congratulations to @SofiaKenin on winning her first grand slam title at the @AustralianOpen. The future of tennis is so bright! #AusOpen #AO2020 #DreamBig https://t.co/BRtFzXpM0E

As Kenin becomes the latest in a crop of developing young stars to win a Grand Slam following Naomi Osaka (2018 US Open, 2019 Australian Open), Barty (2019 French Open) and Bianca Andreescu (2019 US Open), it appears King is correct. While Williams has been the dominant presence on the tour for much of her long career, it seems as if the future has arrived and will be the force to be reckoned with for many years ahead.

During her speech following the match, Muguruza, 26, said she expected to see Kenin playing in “many more finals.”

“If she keeps playing like this, she proves [to] us that she can play very well, play very well in the important moments, which is different story,” said Muguruza said. “I think it’s even more special. I think [she can win more Grand Slam titles].”

Kenin will next join forces with Williams, Gauff, Mattek-Sands and Alison Riske as part of the United States team for the Fed Cup as they take on Latvia in Everett, Washington next week. It’s a quick turnaround, but she’s excited to be a part of the team. She hopes her success can help bolster the squad.

She knows her life will never be the same, and she will have to find a way to prepare for her upcoming schedule, but first, she plans to take in this night and celebrate the incredible accomplishment she’s worked toward for so long.

“It’s just such an honor to have my name on that beautiful trophy,” she said, while staring at it next to her. “It’s something I’ve dreamed about. Of course it’s an exciting moment for me and for my family [that] I get to share this [with].

“Obviously things are going to change for me, but we’re just going to move forward, get ready for next tournaments. But right now we’ve got to figure out how to celebrate.”