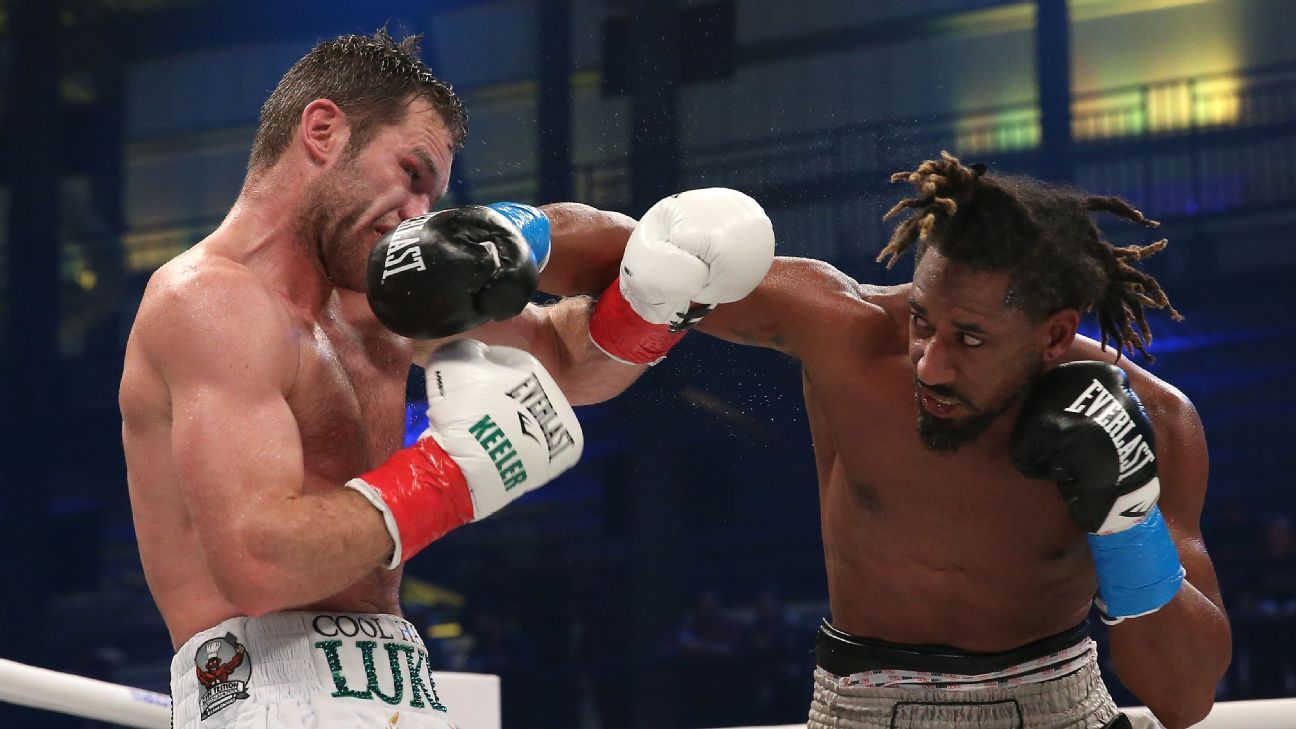 Boxing decided to get in on the action of Super Bowl weekend with a special Thursday night fight card in Miami. By the end of the night, Joseph Diaz Jr. and Murodjon Akhmadaliev won world titles, Demetrius Andrade held serve and Jake Paul all but assured us of another big YouTube scrap with his quick victory.

So what does it all mean for the biggest names who stepped between the ropes?

Will Andrade get the mega fight he’s looking for after his performance on Thursday?

Rafael: He has not been able to get one so far, and I don’t see anything changing any time soon. Andrade presents too much risk, even though Matchroom Boxing promoter Eddie Hearn is willing to offer good money — $7 million, for example, to fellow middleweight titlist Jermall Charlo for a single fight or as part of a longer deal. DAZN has also said it would let Andrade go to another broadcaster for his big fight and he still can’t find any takers, including Canelo Alvarez and Gennadiy Golovkin, who both fight on DAZN but won’t even say his name.

Andrade’s best hope might be a move up to super middleweight, which he said he is willing to do. He said he is interested in titleholder Billy Joe Saunders. That’s not that big of a fight in the scope of things, but it’s much bigger than the guys Andrade has been stuck fighting recently. He was supposed to challenge Saunders for his middleweight title in October 2018 but the fight was canceled when Saunders tested positive for a banned substance and subsequently moved up in weight. Andrade wound up winning the belt Saunders vacated before he would have been stripped and has not been able to find a top middleweight to fight him.

Kim: Based on the nature of this victory, as he let the overmatched Luke Keeler stick around for nine rounds, no, he won’t. Simply put, the likes of Canelo, Golovkin and anyone else high on his list, will consider Andrade to be toxic and not worth the trouble. And the public doesn’t have a particular appetite to see him.

This fight, in many ways, encapsulated the issue with Andrade. While he’s certainly talented and very difficult to hit, he wins, but doesn’t do so in such a fashion that creates any type of real demand for a well-known middleweight to face him. After scoring knockdowns in the first two rounds with lashing left hands, he couldn’t finish the job — and quite frankly, the action was monotonous.

While Andrade dominated the action throughout, the fact that this fight nearly went to the 10th roundwill be held against him. It may not be fair, but boxing isn’t just about the final result — the journey matters too.

What’s next for Diaz?

Kim: For Diaz, the third time was the charm in winning a world title. The scorecards don’t tell the story (well, at least two of them, which had it way too close at 115-113), because the young man from South El Monte, California dominated this fight from the very beginning. He chipped away steadily to Tevin Farmer’s body and was the much more accurate puncher of the two. Despite a nasty gash over his left eye, suffered from a clash of heads in the second round, Diaz soldiered on and went to work. There is a rematch clause, according to Diaz, and chances are that Farmer will enforce it, but Diaz showed his class tonight. While he doesn’t have great power, he is a sharp craftsmen that can break down an opponent over 12 rounds. With this victory, he joins his 2012 U.S. Olympic teammates Errol Spence Jr., Jose Ramirez, Jamel Herring and Rau’shee Warren in winning world titles.

Rafael: In his third shot at a world title, Diaz put on the best performance of his career and soundly outpointed Farmer, who is typically a consummate boxer with superb defense. But not against Diaz. What’s next is pretty easy. Farmer has a rematch clause, because the fight was an optional defense and he said he plans to exercise it. So most likely they will take a rest and we will see the rematch later in the year. Diaz, however, is going to be sidelined for a while because of a horrendous cut over his left eye from an accidental head butt in the second round. It will be several months before he can fight again.

How does Farmer recover and move forward?

Kim: As for Farmer, it just wasn’t his night. Perhaps there were some issues making the 130 pound limit, but for much of this bout he was much slower than usual, and all his movements — which are usually so smooth, and make him so elusive — seemed labored and forced. It was actually stunning to see him get hit clean so often. It looks like he will enforce his rematch clause. He’ll have the opportunity to show that the loss to Diaz was a fluke, or perhaps it’s just time to move up to 135.

Is Akhmadaliev as good as he looked against Daniel Roman? What’s next for him.

Rafael: Akhmadaliev is actually better, in my opinion, than he looked against Roman. Even though it was only his eighth pro fight, he was the betting favorite. He was a star amateur with more than 300 fights and a 2016 Olympic bronze medal for Uzbekistan. He was on the fast track from the day he turned pro and has lived up to the potential — but he can get better. He’s a stud and thriving under the tutelage of trainer Joel Diaz.

Roman mentioned wanting a rematch, so that could be an option, but I doubt it. Akhmadaliev may have to make a mandatory defense of one of his belts, but we will have to wait and see what the sanctioning bodies have to say about that. If he is free to do as he pleases, he can fight anybody willing to get into the ring with him.

Kim: Akhmadaliev defeated Roman in a hard-fought boxing match, and now he finds himself the WBA/IBF 122 pound titleholder. Akhmadaliev, of Uzbekistan, showed that he will be a real handful for anyone he faces in the division. There’s a reason why his handlers pushed so hard to face the accomplished Roman so early — they believe he’s the goods.

Akhmadaliev is an athletic and hard-punching southpaw. It says a lot that with just eight fights that he was able to edge Roman, who in past title defenses had worn down his challengers with a varied attack. You figure that at age 25, and with the experience gained in the fight against Roman, that Akhmadaliev will only get better.

Right now, the other belt-holders at 122 are Rey Vargas and Emanuel Navarrete, but unfortunately — like other weight classes — you see that boxing politics and network alliance might prevent them from getting in the ring. Vargas recently joined Premier Boxing Champions, and Navarrete is with Top Rank.

But the reality is that even with so few fights in his record, Akhmadaliev is still very much high risk, low reward for the other titlists at junior featherweight. Look for Akhmadaliev to build his profile and gain more experience in a series of title defenses and mandatory challenges that will soon be forthcoming.

Where does Roman go from here?

Kim: You could make a strong argument that Roman did enough to retain his titles. But regardless of the result, Roman is still very much an elite fighter in this weight class. While he doesn’t have great power, his overall skills and determination make his fights very entertaining.

With how close this fight was, why not have a rematch? The close and competitive nature of this fight would certainly warrant a rematch between the two. Can Roman do just a bit more to regain his title? Or does Akmadaliev improve his performance and win more definitively?

Rafael: He took this fight when a lot of people did not think he would, because defending against his mandatory challenger and keeping his unified titles was important to him. He has never ducked anyone and is not about to start now. I think he and his team will look for the biggest and best opportunity available. He did not complain about the close split decision, but said he would like a rematch with Akhmadaliev. That seems unlikely in the short-term. But there’s no reason Roman can’t take a little break, get back in the gym and right back into the thick of the title hunt.

With how Jake Paul-AnEsonGib played out, do we need more of these “YouTube” fights?

Kim: The question isn’t whether we want or need any more of these matchups — the bottom line is that DAZN and Matchroom Sports will continue to showcase them on their cards. They attract a certain younger audience, and with that non-traditional audience, DAZN believes they’ll bolster their subscription numbers.

But while many traditionalists and diehard boxing fans are probably turned off, it not downright insulted by such novelty acts, the reality is that they have been around for years. Anyone remember how many times Butterbean and Mia St. John were a part of Oscar De La Hoya pay-per-view undercards?

Honestly, I find these things to be a tad amusing, and at least Paul-Gib ended quickly. Where they do cross the line, in my view, is when they are the co-main event on cards and push down legitimate world championship fights like Roman-Akhmadaliev and Farmer-Diaz.

Regardless, these “fights” are here to stay, so prepare yourself for KSI-Jake Paul in the spring.

Rafael: If people want to see those kinds of fights, so be it. I am not into it but have nothing against it, as long as I don’t have to watch them. To each their own.