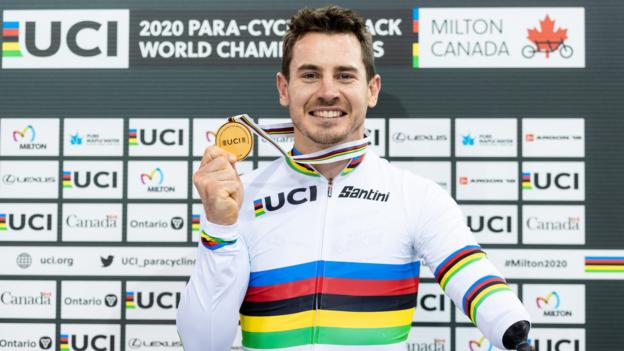 The 33-year-old, who was born in South Africa, was crowned world champion for the first time with a winning time of one minute 7.867 seconds.

He added: “To finally have a rainbow jersey means the world.”

It marks Van Gass’ second medal of the championships in Milton after pursuit silver on Thursday. British team-mate Fin Graham was sixth behind him in the kilo.

They will race Poland’s Marcin Polak and Michal Ladosz, who set a new world record in qualifying, in the final later on Friday night.

In the women’s tandem pursuit, Lora Fachie and her pilot Corrine Hall qualified for Friday night’s bronze medal final with a time of 3.29.108 – their fastest time since winning Paralympic gold at Rio 2016.

Sam Ruddock finished fourth in the C1 kilo, while Louis Rolfe and Matthew Robertson placed fourth and sixth respectively in the C2 kilo.

Korda, Thiem, Wawrinka win at Moselle Open
Cavs, Wade agree to 3-year, $18.5M extension
Do Suarez, Cavani work together? How about Nunez? Uruguay have big World Cup questions
May to IL; Dodgers hopeful RHP back for NLDS
The King of Rio retires: Jose Aldo’s top moments from an iconic career