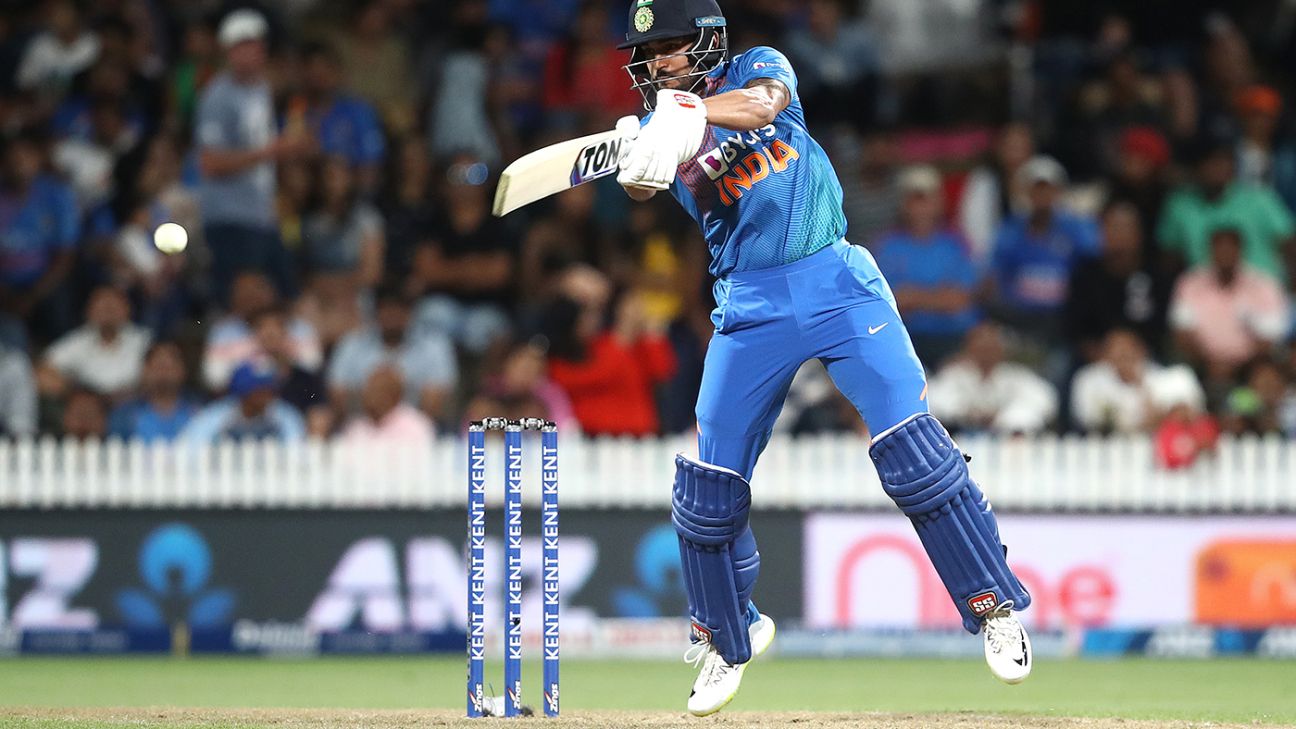 When Manish Pandey first made a name in top-flight cricket, he was, in all the glorious irony, a top-order batsman in a team where Virat Kohli batted at No. 6. The year was 2009, and Pandey became the first Indian to score a century in the IPL. Eleven years on, Pandey is yet to find himself a safe stay in any Indian international side, and Kohli is a bona fide legend of the game.

Pandey’s captain now, Kohli bats at 3, and has thrown Pandey’s international career a life line, choosing him ahead of Rishabh Pant, for a role at Nos 5 and 6. Pandey, who bats much higher in the IPL still, has been asked to adjust, and on Friday, he played a part in India’s march to a 4-0 lead in the five-match T20I series.

With Shivam Dube being the only left-hand batsman in the side, it has inevitably meant that Pandey has had to bat at No. 6. In this game, he came in at 75 for 4, saw the situation worsen to 88 for 6, but kept picking up the ones and twos to stay in the game when the last four overs came. While the wisdom of not farming the strike with No. 10 Nitin Saini is still questionable, Pandey kept the team alive instead of going for a low-percentage shot early on, which has been the team’s gripe with Pant.

Pandey ended up with an unbeaten 50 off 36 balls, which gave India just about enough to win the game. Pandey spoke about the challenge of batting lower down the order where you either have to start hitting from ball one or rebuild an innings, which calls for a different temperament.

“I have to start preparing my mind as a No.6 batsman because normally I bat up the order, No. 3 or No. 4,” Pandey said. “Here with the competition up top, you just have to wait for your chances, exactly how it used to happen before this. There were hardly six or 10 balls that I would play before. Today was the opportunity, and I’ve been preparing myself as to how to bat No.6 and what kind of shots I can play, what kind of bowlers, and how many overs are left. You’ve got to start preparing when you’re sitting outside. You need to calculate.

“It’s not an easy position to bat at No.6, where you know you’re the last main batsman and you have to play with the bowlers if anything happens up top. That’s what happened today. I was pretty clear about my role. I thought I’ll probably be there at the crease by the end of the 20th over, and I thought I did that pretty well, and I’m happy with that.”

Pandey said you have to curb yourself at that position. “I start thinking about percentage cricket,” he said. “I have to curb down on my shots a little bit. I can’t be very expressive as soon as I go in, even if the wicket is really flat. But I just have to play those twos, look to rotate the strike. I’ve been working on that and today I thought it came off really well. These are small things that I’ve to work on.

“If you want to bat [at] 6, then you have to be pre-ready. The game is already set for you at No.6 and you just have to sometimes go and perform at the speed that the previous batsmen have set for you. But today was an opportunity, because we lost a couple of wickets early. Unluckily, Washy [Washington Sundar] got out early. We could have had a partnership there. Shardul [Thakur] batted well and [Nitin] Saini gave me a little bit of a stand there. Batting was quite good today.”

Despite this being a World Cup year, Pandey said he was not going to start at No. 6 for his IPL franchise just because that seems to be the only position available in the Indian line-up. “I would still bat No.3 when I go back to the IPL,” Pandey said. “It gives me more of an opportunity and more chance to spend time on the wicket. It gives me little more extra time when I bat, with the way I bat. Competition here is too tough, and I’ve got to make my place, have to squeeze in. So even if they give me No.6, I’m happy to take it. I’d love to keep contributing this way and helping my team win.”

That’s the only way it works. The top three are over-crowded at this moment, and there is a tough competition for slots down the order too. “I have no choice [with the role given to me by India]. I have to be good with it.”