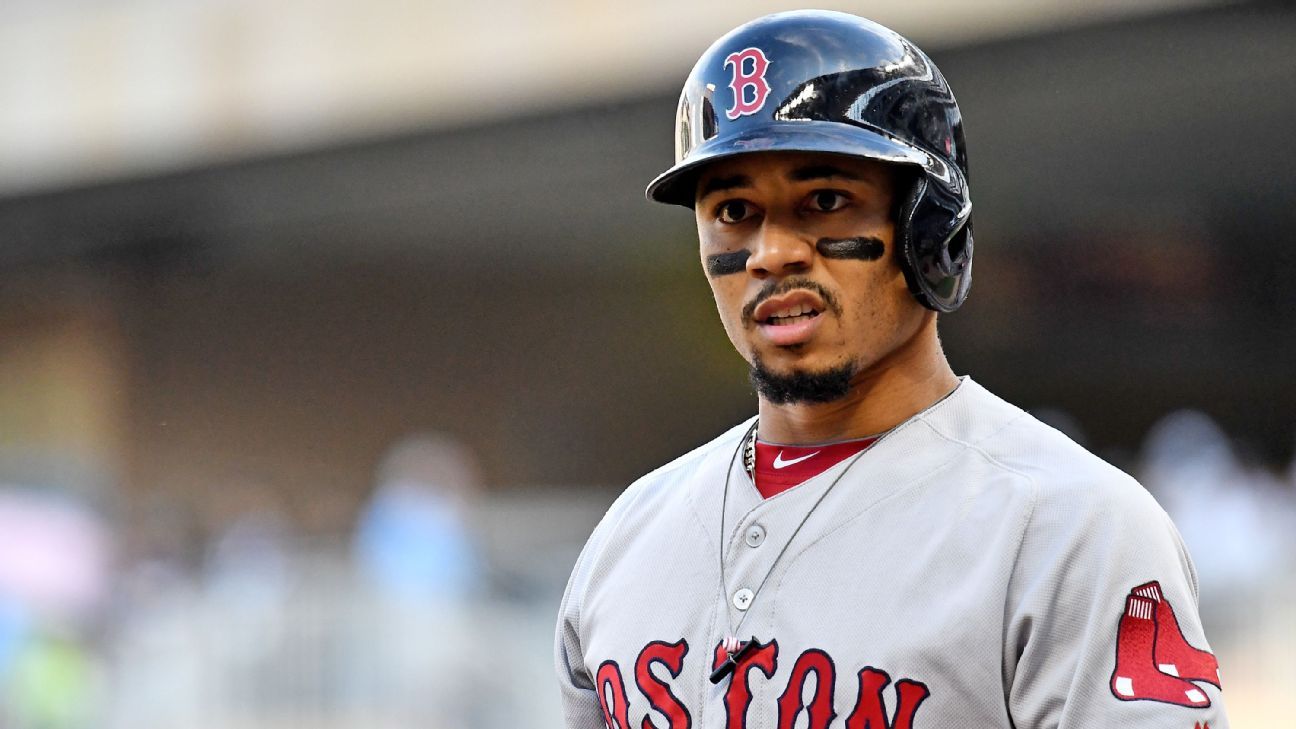 The Mookie Betts trade rumors, after festering all offseason, have reached new heights in recent days, with speculation that a deal between the Red Sox and Dodgers — or maybe the Red Sox and Padres — is inching closer to completion. While free agency moved rapidly this offseason, it has been a slow market regarding trades — Tommy Pham and Starling Marte have been the two best players traded — but maybe we’ll finally get that superstar trade we’ve been anticipating all winter.

Let’s do a quick Mookie Watch Q&A to review what’s going on with the 2018 American League MVP as the baseball world waits to see whether a blockbuster deal will come to fruition.

Why do the Red Sox want to trade him?

Betts is entering his final season before entering free agency, and there was never any momentum for Betts to sign a long-term extension. Betts will be entering his age-28 season in 2021, and given his age and the recent contracts for Bryce Harper, Manny Machado and Gerrit Cole, he’s poised to be the next $300 million player.

As one of the sport’s most prosperous franchises, the Red Sox could certainly afford that — assuming Betts even wanted to stay in Boston — but they have a bigger issue they’ve chosen to stare down: They want to get under the competitive balance tax threshold. Their projected CBT payroll right now, according to Cot’s Contracts, is $227.9 million, nearly $20 million above the $208 million threshold. Betts will earn $27 million in 2020. As Buster Olney wrote Thursday, “Rival executives think it’s inevitable that the Red Sox will trade Betts before the July 31 deadline.”

Obviously, Betts’ contract is not the problem. David Price is owed $32 million a year the next three seasons, and it is a distinct possibility he will be included in any Betts deal. Chris Sale will make $145 million over the next five years. Nathan Eovaldi has three years and $51 million left on his deal. All three missed time with injuries in 2019. Even Dustin Pedroia has two years left on his contract.

The Red Sox also have one of the weakest farm systems in the majors, so trading Betts could bring back some much-needed (and inexpensive) young talent. It seems weird that a rich team is trying to dump a superstar, hurting its chances of making the playoffs in 2020, but the Red Sox believe trading Betts will help improve their chances at long-term success (given that Betts is likely leaving anyway).

Exactly how good is Betts?

So what are the potential trades?

It looks like the Dodgers or Padres are the two primary suitors, with the Dodgers the betting favorite — although new Red Sox GM Chaim Bloom is certainly hoping to play the two NL West rivals off each other to improve the offers.

The Dodgers don’t need Betts as they’ll remain heavy favorites to win the division even without him. The 106-win season of 2019 ended in playoff disappointment, however, and the feeling could be that adding new superstar blood could be the final ingredient to finally get them over the top. Plus, a little roster turnover is a good thing and adding Betts could simply provide a mental lift to the organization in addition to his on-field value.

A Red Sox-Dodgers trade would likely center on outfielder Alex Verdugo, who hit .294/.342/.475 with 12 home runs in 343 at-bats in his first full season at age 23. Verdugo is a high-contact hitter who had excellent defensive metrics while playing all three outfield positions. In his part-time role, he was worth 3.1 WAR, so it’s not inconceivable to see him as a 4- or 5-win player, especially if he adds a little more power. He’s under team control through 2024.

Like the Dodgers, the Padres also have a deep farm system to deal from, although, much like the Dodgers won’t be trading Gavin Lux (and probably not pitcher Dustin May), the Padres will not be trading top pitching prospects MacKenzie Gore or Luis Patino. Catcher Luis Campusano, who hit .325/.396/.509 at age 20 in winning co-MVP honors in the California League, could be the prime attraction for Boston. The Padres could also include a couple of young major leaguers with a prospect, such as outfielder Manuel Margot (a former Red Sox farmhand), first baseman Josh Naylor or a pitcher such as Joey Lucchesi or Cal Quantrill.

It’s worth noting that Dodgers president of baseball operations Andrew Friedman was Bloom’s boss when the two worked together in Tampa Bay for about 10 years, so that relationship could help facilitate a trade.

What could hold up a trade?

The other parts. The Red Sox would love to include Price and his $96 million in any Betts trade. Price has still been a quality starter when he’s able to take the mound, but he has missed significant time in two of the past three seasons. He made 22 starts in 2019 and went 7-5 with a 4.28 ERA/3.62 FIP. He did strike out 128 in 107⅓ innings, so the stuff is still there when healthy. He’s probably worth about $15 million per season on the open market, so the Red Sox would have to include some cash to pay down his salary if he’s part of a deal.

On the Padres’ side, they would love to dump Wil Myers, who is owed $61 million the next three seasons and is coming off a minus-0.3 WAR season. According to Kevin Acee of The San Diego Union-Tribune, the Padres want the Red Sox to pick up half that contract. Note here that Myers’ tax figure is much lower than his actual salary, at $14 million per season (the CBT is based on the annual average value of the contract). So if the Padres pay down $30 million of the $42 million remaining tax amount, the Red Sox’s tax hit is just $4 million per season (but $10 million actual cash). The bigger issue is whether the Red Sox actually want Myers or believe he can bounce back from a terrible 2019.

How will Betts hit away from Fenway?

Betts is a pull hitter, so his offensive game is perfectly tailored to Fenway Park. His career numbers:

On the other hand, maybe the bigger gaps down the left-field line and left-center gap will produce more hits — Fenway left field giveth but it also takes away some hits. In general, Dodger Stadium and Petco aren’t great hitters’ parks, so I would guess Betts will lose a few home runs and some points on his batting average (which has jumped up and down all over the place the past four years anyway) if he’s playing his home games on the West Coast in 2020.