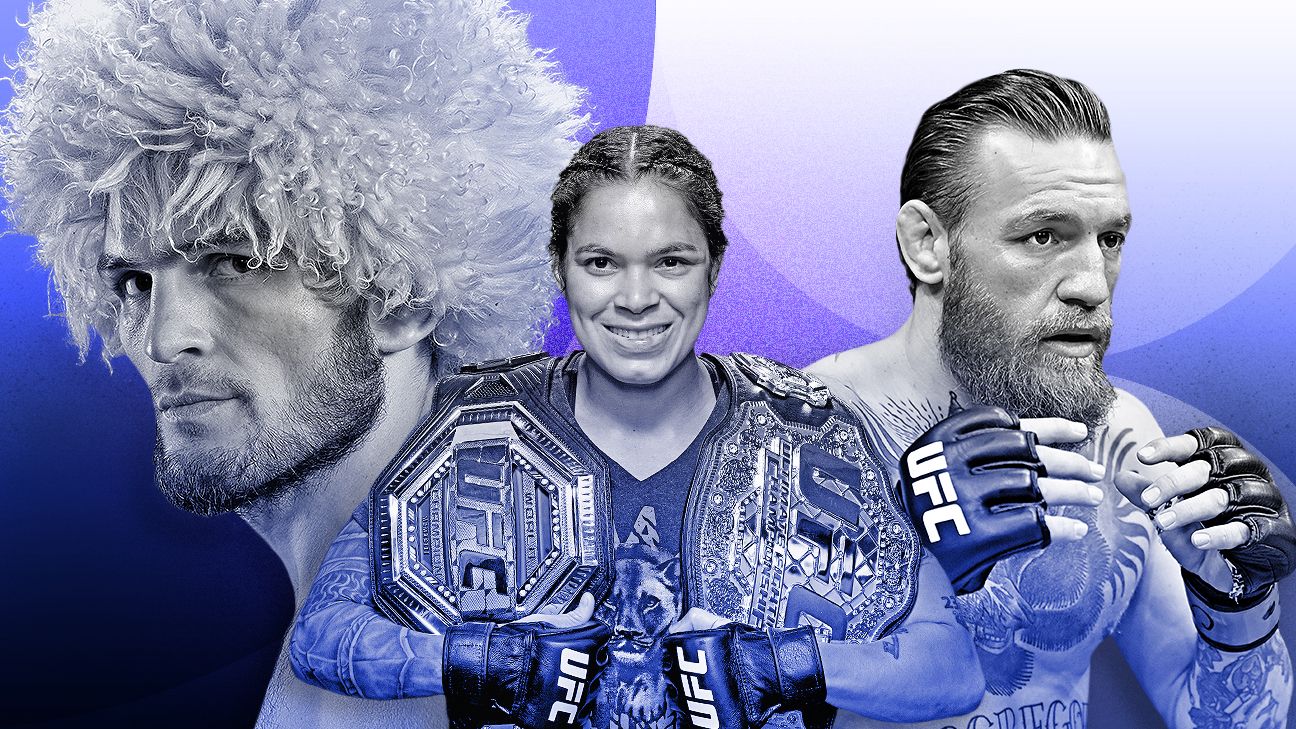 2020 outlook: The first half of 2019 was exceptional for Cejudo. However, since he won the bantamweight title in June, things have turned a bit. He was forced to have shoulder surgery, which he’s still recovering from, and the UFC stripped him of the flyweight title in December due to inactivity. He’s currently campaigning for a fight in May against Jose Aldo, who has lost two in a row, yet the UFC seems interested. Hopefully he can get two fights in this year and remind people just how good he is, but it does seem that his flyweight days are over for now.

2020 outlook: The newly crowned featherweight champion is still nursing a broken hand, but with rumors of a UFC pay-per-view in his home country of Australia later this year, that should prove to be a big showcase for “The Great.” A rematch versus Max Holloway is probably the most high-profile fight out there for him and should do big business back home, too. He’s won 18 straight against some amazing competition. I’m curious to see how he settles in as champion.

2020 outlook: Nunes is a champion in two weight classes, yet amazingly doesn’t seem to have anyone to fight. Now, she just fought a little over a month ago, but that does seem weird. It’s really a byproduct of how dominant she’s been. Her next fight will likely be against someone who isn’t really ready to fight her, and that should bode well for the queen of the bantamweights and featherweights. As long as she remains hungry, she should continue to carry double gold all year long.

2020 outlook: McGregor couldn’t have scripted a better start to the year than the way it all went down for him a couple of weeks in Las Vegas. If he’s able to fight at least three times this year, as he has repeatedly said is his desire, and if he’s able to win all three of those fights, it would represent one of the most impressive career comebacks in UFC history. This time last year it appeared as though his career was spiraling out of control. Now, he looks refocused and motivated to prove he’s the best in the game. As far as who’s next, he can pick anyone he wants. Masvidal? Justin Gaethje? Nate Diaz? Dustin Poirier? The call is his. Few have ever possessed that kind of power in this game.

2020 outlook: Not that long ago the talk surrounding Ngannou was that he was a bust. Sure, he could hit hard, but after two straight uninspiring losses versus Stipe Miocic and Derrick Lewis in 2018, it seemed like everyone was off his bandwagon. Since then, all he has done is win, and win supremely impressively. The combined duration of his past three wins is 142 seconds. That’s wild. And a victory over the surging Rozenstruik should put him in line for the next title shot after Miocic and Cormier tangle for a third time. There will be nothing left for him to do after that.

2020 outlook: I’d argue that the gap between Shevchenko and the rest of the contenders at women’s flyweight is larger than the gap between any champion and contenders in the history of the UFC. She is that darn good. Of course anyone can lose on any given night, but I wouldn’t be surprised to see Shevchenko go on a dominant run much like Demetrious Johnson did when he was the king of the flyweights. One good thing about Shevchenko is that she likes to be active. I wouldn’t be surprised to see her fight three times this year.

2020 outlook: Usman might not be the biggest draw right now, but he has two things going for him at the moment: he’s a great fighter on a 15-fight winning streak and he happens to be the champion of the division both Jorge Masvidal and Conor McGregor are currently factors in. That’s a great place to be as champ. If Usman gets his way, Masvidal will be next. That’s a huge fight for him right now, and a win will most certainly elevate his stock.

2020 outlook: Adesanya isn’t resting after a tremendous 2019 campaign. And while it’s a shame his next bout isn’t against fellow undefeated fighter Paulo Costa, a dominant win over Yoel Romero would still be impressive. Then, if he gets by Romero, Costa awaits, and that will be just the second time in UFC history two undefeated male fighters would compete for a belt. Adesanya looks more impressive every time he fights. I can’t wait to see how he follows up last year’s success.

2020 outlook: Jones has big plans this year. If he gets by Reyes at UFC 247, there’s a chance he may finally test the waters at heavyweight, something fans have been clamoring for him to do for a while. And then who knows, maybe he’s fighting for that title by the end of the year. Even if he doesn’t move up, the gap between him and the rest of the division, which has evolved nicely as of late, still appears significant. As long as he continues to be focused and motivated, the sky is still the limit for Jones.

2020 outlook: As of right now, Nurmagomedov versus Ferguson is the most-anticipated fight of 2020. It has been well documented that this is the fifth time the UFC has tried to put this one together, so there is a great sense of anticipation for it. But above that, it represents the very best MMA has to offer right now: two streaking fighters (both 12-0 in their past 12 UFC fights) going toe-to-toe to determine the best lightweight on the planet. What’s better than that? And then, if he gets by Ferguson, a potential rematch against McGregor looms, and that would most likely be the highest-grossing fight in UFC history.

After a frustrating Australian Open exit, Coco Gauff looks to the future
Rahm surges at Torrey Pines, within 2 of Ryder
Notable bets: How two hours of Bengals bets shifted AFC Championship line
Hall of Fame voting winners and losers: Scott Rolen is headed to Cooperstown — who else got good (or bad) news?
Another week, another major Power Rankings reshuffling — including at No. 1