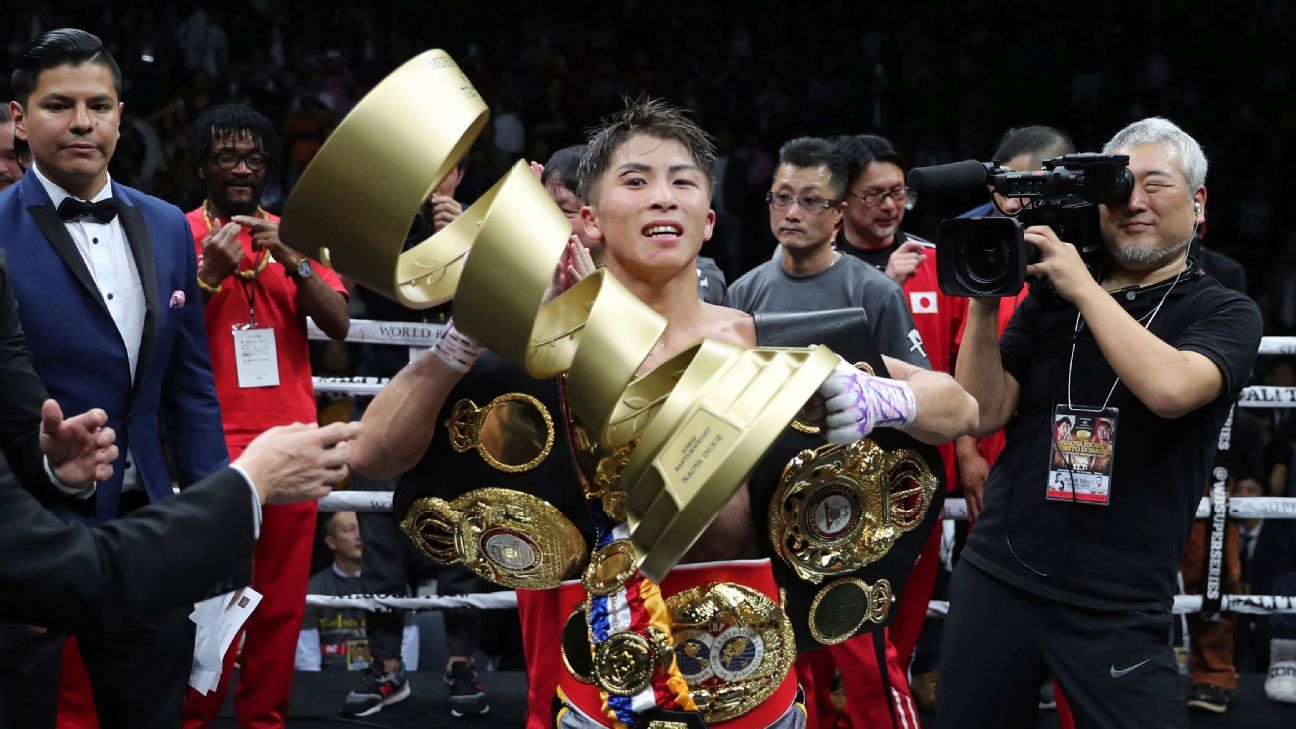 Two-belt bantamweight world titleholder Naoya Inoue announced at a news conference in Tokyo on Friday that his unification bout with John Riel Casimero is set for April 25 at Mandalay Bay in Las Vegas.

The fight will be broadcast on ESPN platforms as part of the deal between the network and Top Rank, which signed “The Monster” to a multiyear co-promotional deal with Ohashi Promotions in November with the plan to bring the Japanese star to the United States to fight regularly.

“I’m happy to be able to engage in a unification bout with Casimero with our three world belts on the line,” Inoue said in remarks translated by Japanese boxing journalist Joe Koizumi. “This will be the first for a Japanese boxer to win three world belts if victorious. I plan to enter the U.S. three weeks before to be in tip-top shape on the fight day. This is also my first engagement after executing a promotional contract with Top Rank, and I am eager and excited to show a great performance before worldwide fight fans.”

Inoue (19-0, 16 KOs), 26, is ranked No. 4 on the ESPN pound-for-pound list, behind only Vasiliy Lomachenko, Terence Crawford and Canelo Alvarez. Inoue has won world titles in three weight class — bantamweight, junior bantamweight and junior flyweight — and unified two bantamweight belts on Nov. 7 in Saitama, Japan. That is where he won a thrilling unanimous decision in a brutal slugfest with four-division titlist Nonito Donaire to win the eight-man World Boxing Super Series tournament in the consensus 2019 fight of the year. In the ring after the fight, Inoue’s contract with Top Ran was announced.

Inoue suffered a terrible gash over his right eye, a fractured nose and a fractured orbital bone. But he did not need surgery and said his injuries have healed.

“I have already started sparring, and I’ve no problem in my right eye,” said Inoue, who appeared at the news conference with co-promoter Hideyuki Ohashi and his trainer and father, Shingo Inoue. “I’ve completely recovered from the unexpected injury.”

The Philippines’ Casimero (29-4, 20 KOs), 30, who is promoted by Manny Pacquiao’s MP Promotions, has also won world titles in three divisions — bantamweight, flyweight and junior flyweight. He claimed his bantamweight belt by upsetting South Africa’s big-hitting Zolani Tete via third-round knockout on Nov. 30 in Birmingham, England. He will be making his first defense against Inoue.

“He is an aggressive and hard-punching boxer, who is dangerous and wild enough,” said Inoue, who will be making his fourth title defense at 118 pounds. “I wish to carefully watch his strategy and strength as well.”

Top Rank chairman Bob Arum declined to discuss the match but said there would be an official announcement next week.