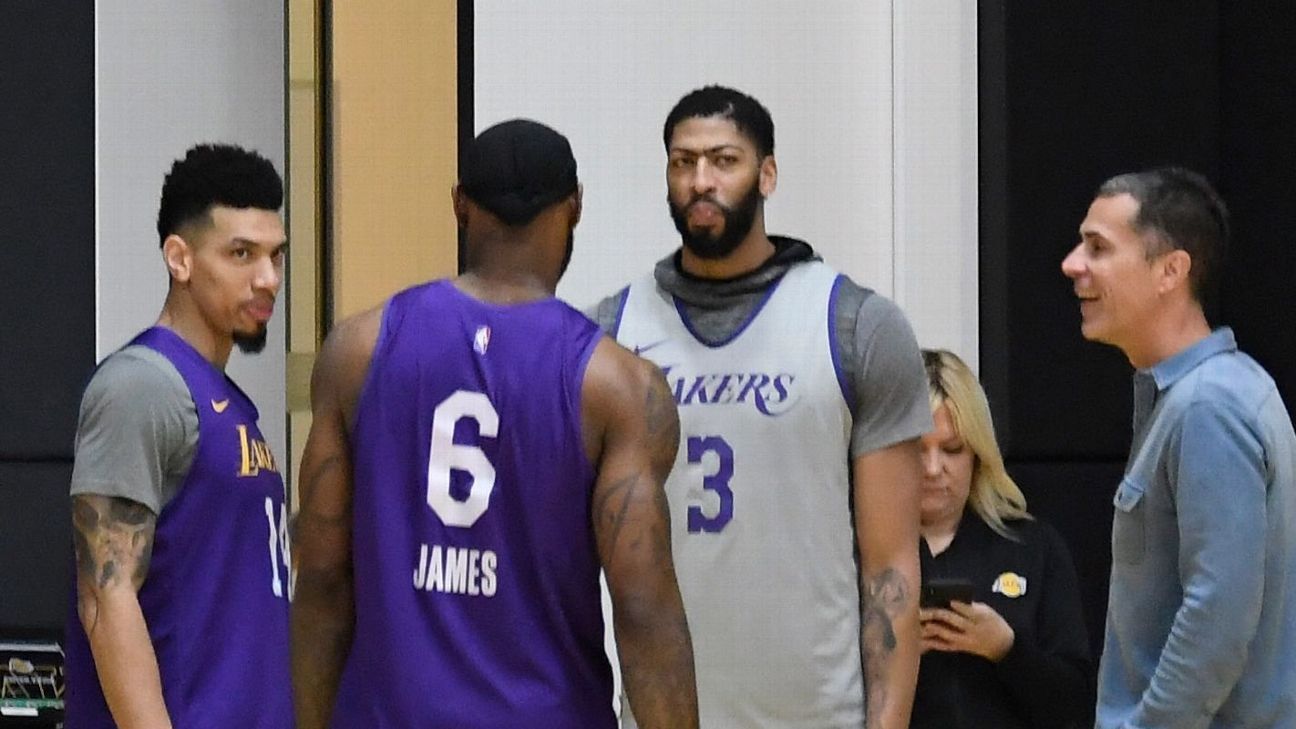 MYCHAL THOMPSON HAS hardly been able to sleep since he woke up to a nightmare on the Los Angeles Lakers‘ charter flight Sunday afternoon.

Kobe Bryant was killed in a helicopter accident, and Gianna was with him. She’s gone, too.

The Lakers broadcaster had been asleep on the trip home from Philadelphia when his broadcast partner, John Ireland, woke him with the news.

“I just can’t get those words out of my head,” Thompson said. “I just keep hearing those words over and over.”

Thompson and Ireland were in the back of the team plane with a few other staffers, broadcasters and security guards. Players and coaches were up front.

“It was just stunned silence,” Thompson said. “Everybody was sitting there in a daze.”

The plane had Wi-Fi, but in a moment like this, information is not a salve. Thompson longed to get to his family. During a Lakers-Blazers game nearly 20 years ago, the former NBA big man had introduced his sons Mychel and Trayce to Bryant.

“Klay was too shy,” Thompson said.

Klay Thompson ended up meeting Bryant a few years later, going on to train with him at various gyms around Orange County before blossoming into an NBA All-Star and champion with the Golden State Warriors.

Klay called his father as soon as he heard the news on Sunday. So did Thompson’s wife, Julie. But there was still over three hours left on the flight back to Los Angeles. When the plane landed, Thompson went straight home and turned on the news.

“You just try to find a reason,” he said. “Was it mechanical? Was it weather? You just want to know what happened. How did this … how could something like this happen?

“And even if we do find out what happened, it doesn’t bring them back.”

LAKERS CONTROLLING OWNER Jeanie Buss and vice president of basketball operations Rob Pelinka were in Orange County by the time the team’s plane landed back in Los Angeles. They’d gotten a call around 11 a.m. informing them of Bryant’s death and immediately started driving to be with his family.

Pelinka was one of Bryant’s closest friends and the godfather to Gianna. His kids played with Bryant’s kids. He wanted to be there, to help, to grieve, to support — whatever they needed.

“There has been an amputation of part of my soul,” Pelinka wrote in a statement Thursday.

Buss had made the drive to Orange County to see Bryant dozens of times. He’d become a trusted adviser and confidant as she succeeded her father as steward of the franchise following his death in 2013. That year, during a lunch, Bryant brought Gianna with him so she could learn from the Lakers’ owner.

“At first, it seemed like an action of a devoted father setting an example for his daughter,” Buss wrote in an Instagram post to Bryant on Thursday. “But in actuality — and I am positively sure you knew EXACTLY what you were doing — what you did was give me the inspiration and strength I was searching for.”

Buss thought of that day on the drive down to Bryant’s offices in Costa Mesa on Sunday. She thought of their lunches at nearby Pelican Hill Golf Club or SOL Mexican Cocina in Newport Beach. She thought of what Bryant said in 2016 when she was thinking of remaking the Lakers’ front office by replacing Mitch Kupchak and her brother Jim with Pelinka and Magic Johnson.

“He gave me some excellent advice,” Buss said in 2017. “You know, the Mamba mentality: ‘If you’re going to do it, do it clearly, decisively. Be strategic, have a plan.’ And he was absolutely right.”

It was hard for Buss not to let those memories become overwhelming as she and several associates spent the day at Bryant’s offices, processing his death. The only clarity anyone had was that they needed to find the strength to honor Bryant, his family and the families of the seven other people who were killed.

Buss had buried her mother, JoAnn, one month ago. Now she needed to find a way to say goodbye to a man her family considered a son.

Coach Frank Vogel discusses the support the team has given Lakers exec Rob Pelinka, who was good friends with Kobe Bryant.

THE LAKERS HAD to arrange for grief counselors for their players and employees. And then, they had to decide whether to play a game against the LA Clippers on Tuesday.

The organization felt it would be too much for its employees — many of whom had known Bryant for over 20 years — to put on an event of that magnitude so soon. But that decision had ramifications for the NBA and many other business partners, so it took until Monday afternoon for a final postponement call to be made.

On Tuesday morning, the team gathered for an optional practice. Then the organization hosted a lunch where players, staffers, coaches and executives shared stories of Bryant’s remarkable life and career. It was important for everyone to come together for a few hours, share their grief and their stories, then raise a glass of wine.

Although they had gone home to their families after landing in Los Angeles on Sunday, the Lakers had stayed in close touch throughout the week. There was frequent communication among ownership, the front office and players as the entire organization took its cues from the Bryant family.

No Lakers official would speak publicly before Bryant’s wife, Vanessa, and that needed no explanation.

The Lakers have long prided themselves on cultivating a family atmosphere. While his close relationship with Magic Johnson has been well chronicled, Dr. Jerry Buss used to invite players of all status out for lunch every few weeks. He was looking to make a personal connection and let them know he cared. It’s something Jeanie Buss made a point of continuing when she took over.

LeBron James and Anthony Davis have been embraced by that atmosphere this year, texting with Pelinka about transactions and socializing with Buss and her friends at games, practices or the office Christmas party. This is a different type of player-owner relationship for James than his other stops in the NBA, but it suits him.

And James and Bryant had just started to grow closer this year. For most of their careers, they’d shared a mutual respect but kept a healthy competitive distance. Two alpha dogs eyeing each other. As recently as last season, when James joined the Lakers, they hadn’t been especially close. But things started changing this season when Bryant attended a game at Staples Center with Gianna and James came over to greet them.

They started talking regularly, building the type of relationship they each probably always wanted. They had even talked early Sunday morning — Bryant called to congratulate James for passing him on the all-time scoring list.

“Didn’t think for one bit in a million years that would be the last conversation we’d have,” James wrote on Instagram on Monday.

James didn’t sleep at all on Sunday night. Monday wasn’t much better.

“I’m heartbroken and devastated my brother!!” he wrote. “My heart goes to Vanessa and the kids. I promise you I’ll continue your legacy man! You mean so much to us all here especially #LakerNation and it’s my responsibility to put this s— on my back and keep it going!!”

ON THURSDAY AFTERNOON, the Lakers went outside on the grass fields across from their practice facility. It was the kind of sunny, gorgeous day that people from Southern California photograph and send to jealous friends on the East Coast.

“That is one of the luxuries of living in Los Angeles,” Lakers coach Frank Vogel said.

There will be tributes to Bryant, his daughter and the seven others killed in the crash before the game, and celebrations of their lives throughout. Planning these tributes has given everyone in the Lakers organization purpose this week. They feel the importance to get this right.

Soon there will be a public memorial, but Friday is the first guidepost.

The Lakers might be owned by the Buss family, but they belong to Los Angeles. And Bryant was a favorite son.

The entire plaza outside Staples Center has been filled with purple and gold remembrances since Sunday. It is open to fans and mourners until 2 a.m. every night, and then again by 6 a.m. each morning.

There are pickup basketball games, raucous chants for Kobe and Gigi and solemn candlelight vigils. On Tuesday evening, Banda Imperio showed up to play for the crowds. It is a tradition at Mexican funerals to celebrate the life of the deceased and send their spirit off with joy.

Over a festive melody, the lyrics to “Un Puno De Tierra” echoed:

On the day that I die, I won’t take anything with me

You must live life to the fullest, for it ends too soon

Of all that happens in this world, all that’s left are the memories

When I die, all I’ll take is a fistful of dirt.