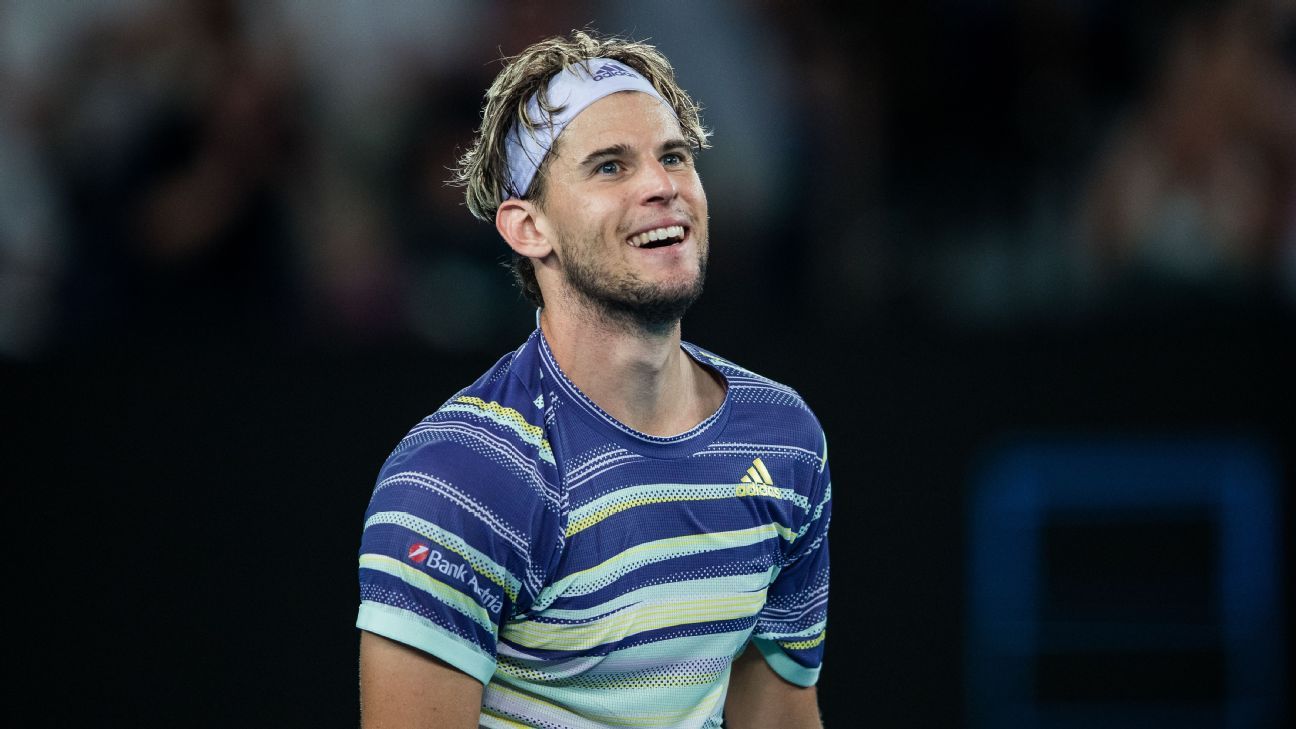 MELBOURNE, Australia — If Dominic Thiem goes on to win this year’s Australian Open for his first Grand Slam title, there can be no question he will have earned it.

Having needed five sets to get through his second-round match against Australian Alex Bolt, the Austrian outlasted Rafael Nadal in the quarterfinals, then outmuscled Alexander Zverev 3-6, 6-4, 7-6, 7-6 in the semifinals Friday in another lung-busting encounter on Rod Laver Arena.

After reaching the past two French Open finals, this will be Thiem’s third Grand Slam finale in all and first on hard courts. The only problem? Seven-time champion Novak Djokovic is the man he needs to beat (Sunday, 3:30 a.m. ET on ESPN/ESPN App).

“It’s unbelievable,” Thiem said. “When I reached the Roland Garros final, I played Rafa twice. He had won the tournament 10 times already. Now I’m playing Djokovic, who’s the king of Australia. He’s won seven times, more than anyone. Looks like I am always playing the kings of a particular Grand Slam, but I will try my best. To be in the Australian Open finals is unreal. What a start to the season.”

After four hours, 10 minutes on court in beating Nadal, Thiem needed another three hours, 42 minutes to get the better of Zverev, the German who acquitted himself well in his first Slam semifinal, a match played with the roof closed after a brief delay for rain early in the first set.

The pair shared a couple of early breaks, but it was Zverev who moved ahead, standing closer to the baseline than usual and rushing the Austrian into a number of errors on his usually trusty groundstrokes.

The second set was nip and tuck as Thiem broke for 3-2, only to be broken back. Zverev then produced one of the best shots of the tournament as he smashed back a Thiem smash for a clean winner, but a second break put Thiem ahead again and he saved three break points to close out the set.

After the first game of the third set, the players were forced to wait for around 7 minutes when a section of the floodlights failed. No worries for Thiem, as any tension he was feeling was dispelled as Neil Diamond’s “Sweet Caroline” played in the stadium.

“I felt like I was in Austria on a skiing holiday, because they play that song all the time,” Thiem joked. “It loosened me up a little bit.”

The end of the third set proved to be key, as Thiem saved two set points at 4-5, the first with a stunning backhand winner and the second with an equally effective forehand.

With Zverev finding the court with more than 80 percent of his first serves, Thiem struggled to get a look in on returns. But Thiem held firm again at the end, taking the tiebreak 7-4, finishing it off with a simple forehand volley into the open court.

Zverev was disappointed not to take his opportunities.

“I had a lot of chances,” he said. “I had 14 break points. That should be plenty. In the important moments, I didn’t play my best, and he did.”

Zverev had promised to give all his prize money to the bushfire relief fund if he won the title, but also said he would give $10,000 for each of his five wins.

Thiem will have one day less than Djokovic to rest before the final, but he seemed sure he will be ready come Sunday night.

“There are disadvantages but also advantages [to having only one day off],” he said. “It’s also a little bit of a challenge to have all the time one day off and all of a sudden two. I have less time to regenerate. But with all the adrenaline and everything, it’s going to be fine. I played two super-intense matches against Rafa and now against Sascha [Zverev], so of course I’m going to feel it, especially [Saturday]. But I am going to have great treatment, an easy hit tomorrow, and then try everything to be 100 percent on Sunday night.”

Djokovic leads Thiem 6-4 in their previous meetings, but the Austrian has won four of the past five, including twice at Roland Garros and, most recently, at the ATP Finals this past November. Zverev said he believes Thiem has a chance to upset Djokovic.

“I think he’s playing the best tennis of his life,” the 22-year-old said.

Against the seven-time champion, Thiem may have to raise his level even higher. One thing’s for sure, he will not lack for effort.