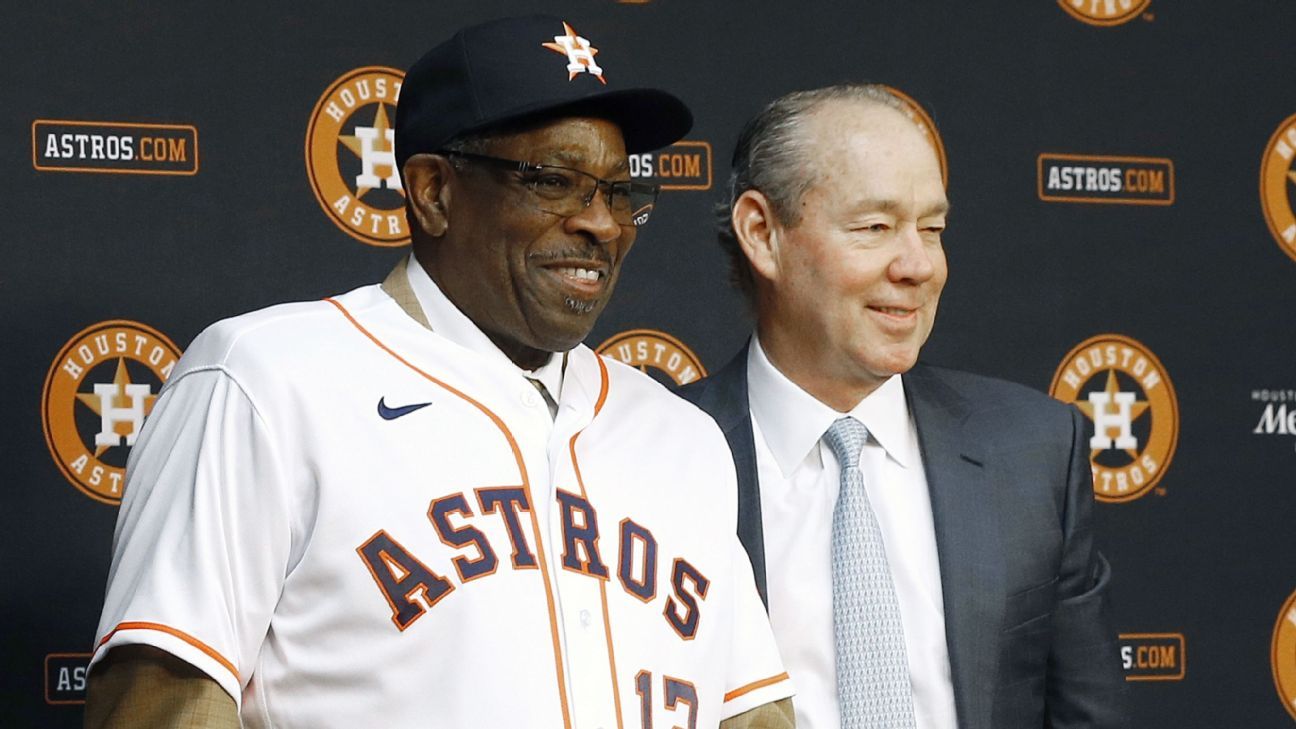 HOUSTON — Before he begins his “last hurrah,” Dusty Baker intends to talk to his new team. He hasn’t decided exactly what he’ll say to the scandal-riddled Houston Astros when spring training starts, but he’s certain of the message.

“You got to go forward and make sure that it doesn’t happen again,” Baker said. “It certainly is not going to happen on my watch here, and I don’t foresee it happening ever again because this has been an embarrassment for a lot of people.”

Baker was introduced as Houston’s manager on Thursday, bringing a wealth of experience to a club reeling from a sign-stealing scam that cost manager AJ Hinch and general manager Jeff Luhnow their jobs.

Baker longed for another shot at an elusive title after falling short in his previous stops. But at 70 years old, he wasn’t sure if it would come.

“I was happy, but I wasn’t satisfied, where I was and what I was doing because something’s missing,” he said. “And I think the Lord gave me the best chance to accomplish what I need as a person, as a father, and as a man.”

Baker is the oldest manager in the big leagues. Hinch was fired Jan. 13 just an hour after he was suspended for the season by Major League Baseball for his role in Houston’s illicit scheme.

“Dusty’s a person of high integrity and he’s a respected leader,” team owner Jim Crane said. “He has great baseball experience, and he will earn the players’ trust.”

Hinch led the Astros to their second American League pennant in three seasons last year and had been scheduled to manage the AL team in the All-Star Game at Dodger Stadium this summer.

Instead, Baker will be invited to manage the AL All-Stars, Major League Baseball said Thursday.

An All-Star outfielder while playing 19 years in the majors, Baker has 22 years of managerial experience, starting in 1993 with the San Francisco Giants.

A three-time National League Manager of the Year, Baker was let go by the Washington Nationals after a 97-65 season in 2017.

“Hiring Dusty Baker is one big step for us to move forward,” Crane said. “And I believe Dusty is the right person at the right time.”

Baker has served since 2018 as a special adviser to Giants CEO Larry Baer, working in both the baseball and business operations of the club. He regularly attended son Darren’s college games at the University of California in Berkeley.

He was so excited about coming to Houston on Thursday that he woke up an hour before the alarm that was set at 2 a.m. was to go off.

“This is my last hurrah,” he said. “And I thought my last hurrah was in Washington, actually, because I gave all my stuff away. I went to find my shoes, went up to the attic and I found the empty bag. … So this is a new beginning for me.”

With just about two weeks until the start of spring training, Baker said he would keep Hinch’s staff intact instead of bringing in his own people.

“We’re going to go with what we have because it’s pretty good,” he said.

MLB commissioner Rob Manfred disciplined the Astros after he found the team broke rules by using electronics to steal signs during its run to the 2017 World Series championship and again in the 2018 season.

The Astros were fined $5 million, the maximum allowed under the Major League Constitution, and forfeited their next two first- and second-round amateur draft picks.

Baker and Los Angeles Dodgers manager Dave Roberts are the only two black managers in the majors, a fact that disappoints Baker.

“But I’m hoping that what we do will motivate other coaches and players to try to strive to get to where I am,” Baker said. “And also hopefully this will incite other owners to say, ‘Hey man, these guys are pretty good at what they do, these guys are the best.”’

Baker said he’ll spend the next few days getting things in order at his home in California to prepare to be at spring training and then in Houston for the season.

Baker has compiled a 1,863-1,636 regular-season record in a career during which he spent 10 years with the Giants, four years with the Chicago Cubs and six seasons with the Cincinnati Reds before his two-year stint with the Nationals.

While Crane has made his choice at manager, he continues to search for Luhnow’s replacement. Former Giants general manager Bobby Evans has interviewed for the job, a person with direct knowledge of the meeting said. The person spoke on the condition of anonymity because the candidates have not been made public. The Astros are still in the middle of the interview process, the person said.