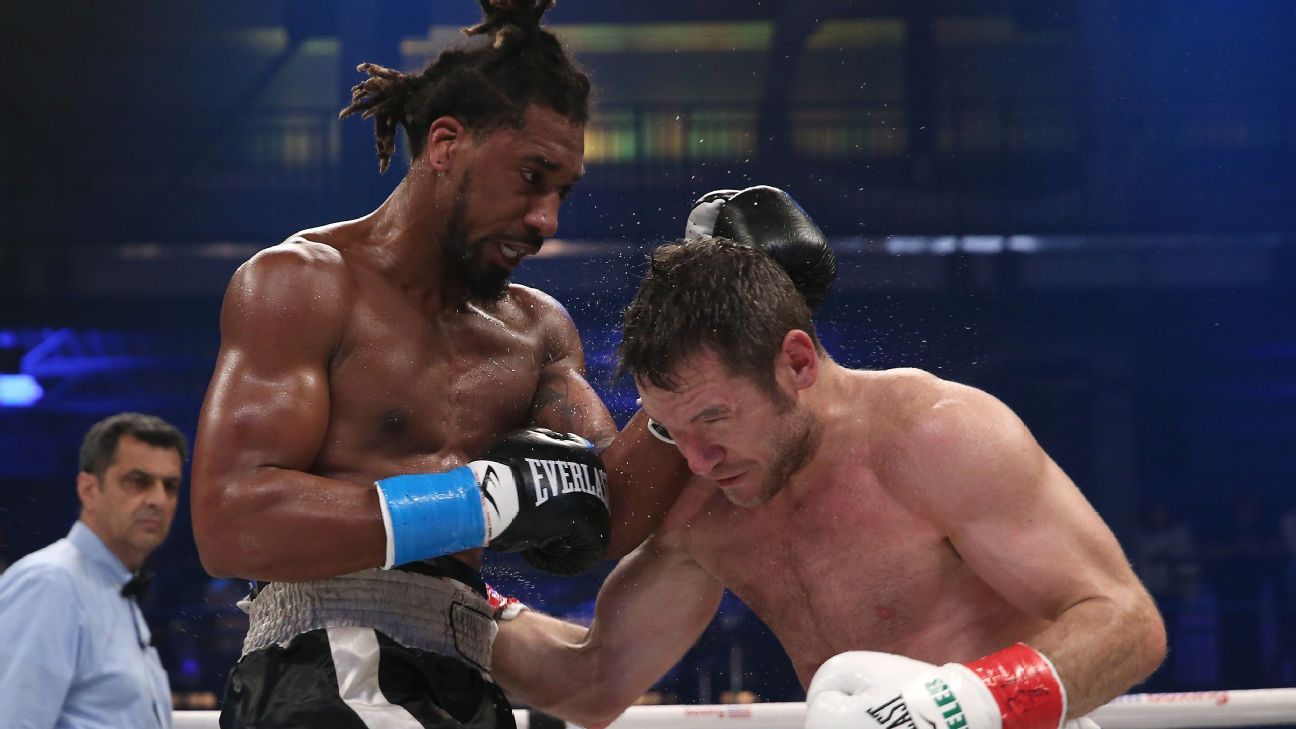 Middleweight world titlist Demetrius Andrade has tried his best to get fellow titleholders Canelo Alvarez, Gennadiy Golovkin and Jermall Charlo to fight him, but they won’t even say his name, much less agree to step into the ring with him.

So Andrade has had to just stay busy and keep winning, hoping he will get his shot at a major fight. He continued to hold up his end of the bargain, retaining his 160-pound belt in overwhelmingly dominant fashion as he scored a pair of knockdowns en route to knocking out the overmatched Luke Keeler in the ninth round Thursday night at the Meridian at Island Gardens in Miami, where the card was one of the events put on around Sunday’s Super Bowl LIV.

“I felt [my performance] was good,” Andrade said. “I know Luke Keeler is a warrior. Today was my day. We felt good. We took him into deep waters and we sunk him.”

The fight was the first of a four-fight contract extension between Andrade and promoter Eddie Hearn of Matchroom Boxing that was announced last week, and Andrade kicked it off with a bang.

He walked to the ring to the Star Wars imperial march music wearing a Darth Vader mask after proclaiming to Keeler all week, “Luke, I am your father,” and as soon as the fight began, he pounded Keeler.

Andrade charged right at him and landed a big overhand left to knock Keeler down in the opening seconds. Another left hand sent Keeler into the ropes in a dominating first round.

“I went in there a little delusional thinking to myself, ‘I can put him out.’ So that’s what I did. Try to go in there and put him out, let him know I’m not delusional,” Andrade said. “I’m entertaining. You gotta love it, and I come to put on a show all the time.”

Andrade, a southpaw, continued to attack in the second round. He landed a long overhand left on the chin, and Keeler went down hard into the ropes with about 15 seconds left in the round. Andrade then landed another left hand and a right uppercut as he closed out the round with Keeler in dire trouble.

Keeler (17-3-1, 5 KOs), 32, of Ireland, managed to stay on his feet in the ensuing rounds, but it was all Andrade, who landed numerous clean punches to the head and body while barely taking anything in return. He is statistically one of boxing’s best defensive fighters.

The CompuBox statistics illustrated Andrade’s utter dominance. He landed 146 of 385 punches (38%) while Keeler landed just 34 of 298 shots (11%). Andrade also extended his streak to 57 consecutive rounds of holding opponents to fewer than 10 landed punches per round. Keeler’s best round came in the eighth, when he connected with eight punches.

Andrade kept looking for one big punch and got sloppy as the fight went on. But Keeler was so ineffective that he could not do anything even when Andrade opened himself up by throwing wild, looping punches.

Keeler, who came into the fight 7-0-1 in his previous eight bouts since 2016 and was coming off his most notable victory — a 10-round decision against Luis Arias, whom he dropped twice, in August — resorted to trying to simply hold and grab to survive. But Andrade shook him off and went after him with abandon in the ninth round, when he pummeled Keeler into a stoppage.

Andrade was all over him, landing thudding rights and lefts and a right uppercut that did major damage and sent Keeler into the ropes. As Andrade continued teeing off on a defenseless Keeler, referee Telis Assimenios stepped in and stopped the fight at 2 minute, 59 seconds.

With Andrade getting nowhere with an Alvarez or Golovkin fight, he said he is willing to go up to super middleweight for his next fight.

“I’m willing to go up to 168 to fight [titleholder] Billy Joe ‘Joke Ass’ Saunders in my next fight, and that’s what I’m looking to do,” Andrade said. “Eddie does have that big [check]book. Offer Billy Joe Saunders that big check so I can whup his ass, too.”

Andrade was supposed to challenge England’s Saunders (29-0, 14 KOs) for his middleweight world title in October 2018, but the fight was canceled when Saunders tested positive for a banned substance and subsequently moved up in weight. Andrade wound up winning the belt Saunders vacated before he would have been stripped. Now Saunders is also promoted by Hearn, so it would be an easy fight to make if Saunders is willing — although he is in the running for a spring fight with Alvarez.

Andrade also would like to see if there is a chance he can lure Charlo (30-0, 22 KOs) into the ring to unify their two belts.

Hearn offered Charlo, who is with Premier Boxing Champions but not signed to a promoter, $7 million to fight Andrade as a one-off bout or as the first fight of a longer deal — Charlo’s choice — but couldn’t get him to take what would be the biggest payday of his career (by millions).

“Eddie Hearn said he sent the offer and he didn’t get no response,” Andrade said. “They want to send an offer this way, we will respond. Let’s get it on.

“Stay tuned — the boogeyman is here.”