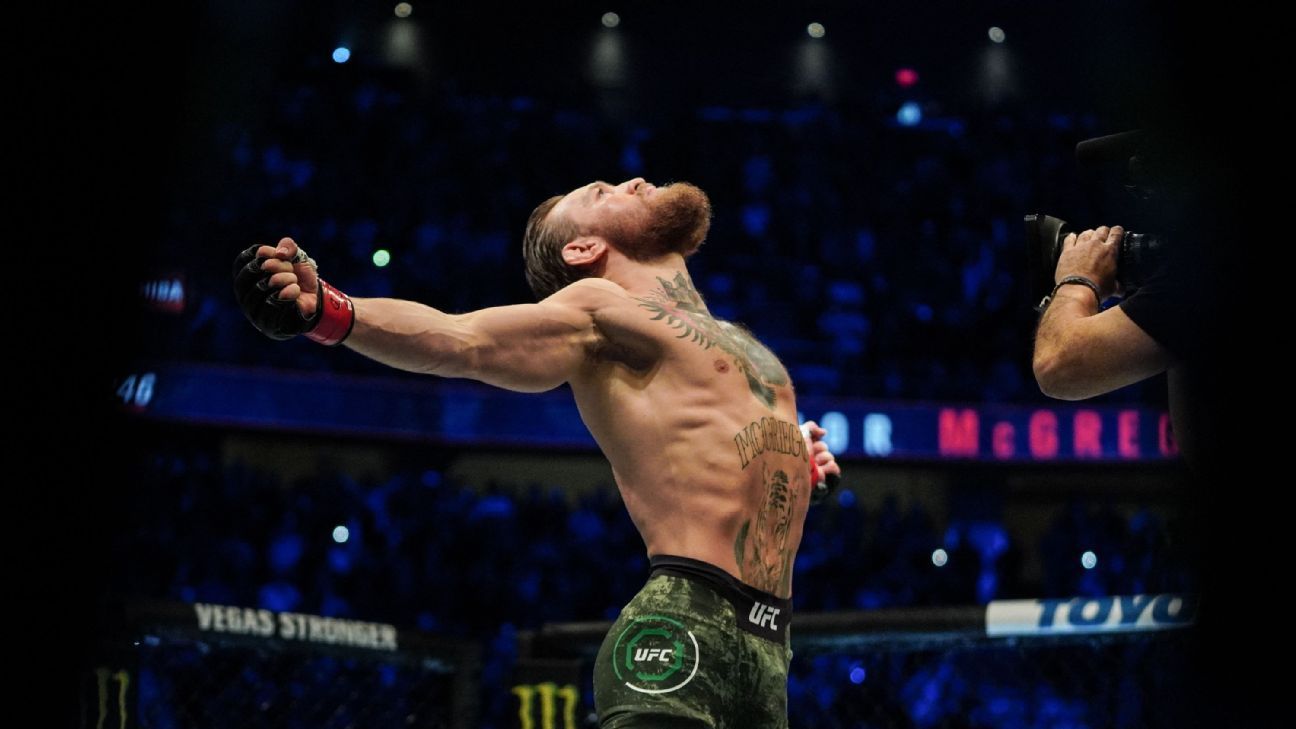 After an impressive start on Jan. 18, Conor McGregor has a chance to record the biggest year of any martial artist in 2020. His popularity alone gives him a leg up on everyone else, as it’s a lot easier to have a big year if the entire sporting world is tuned in and paying attention.

And yet, McGregor landed at No. 7 in this inaugural edition of MMA Rank. How could the sport’s biggest star not land at the top? There are two things that would stand in the way of McGregor leading this list at the end of 2020: not staying active (due to lack of motivation or outside-the-cage distractions) and, of course, losing.

That said, what would a perfect 2020 look like for McGregor?

Obviously, he started off on the right foot with a win over Donald “Cowboy” Cerrone at UFC 246. I would have loved to have seen him face Justin Gaethje in his return fight, but that is splitting hairs. Cerrone turned out to be the right opponent at the right time, and in just 40 seconds, McGregor once again took control of the sport.

His 2020 is locked and loaded to be something special.

So what’s next? And when? For me, it’s clearly a megafight against Jorge Masvidal, and nothing else comes close. The next best option would be a trilogy bout against Nate Diaz — which I do believe needs to happen, and it will be huge whenever it does. But McGregor-Diaz 3 pales in comparison to a fight against Masvidal, at least right now.

Look at the matchup McGregor just had. He fought an absolute legend in Cerrone, and the fight made a ton of sense for McGregor and the UFC, but Cerrone was coming off back-to-back TKO losses. And one of those losses was to Gaethje, a man many — again, myself included — thought McGregor probably should have fought instead of Cerrone.

Will McGregor execute a similar strategy in opponent selection for his second 2020 appearance? Make no mistake, he has the option of fighting Masvidal, and if he demands it, the fight will be there.

If he demands to face Diaz instead, that’s still a blockbuster fight, but he’d be picking an opponent who just lost to Masvidal.

Commercially and competitively, McGregor vs. Masvidal is a perfect fight. They are both surging in terms of popularity. Masvidal has the very gimmicky — but fun — BMF title to put on the line. Stylistically, it’s a fight fan’s dream. It’s the kind of showdown that would make two superstars even bigger.

And in McGregor’s perfect 2020, he beats Masvidal and goes on to face Khabib Nurmagomedov in Las Vegas in the UFC’s final pay-per-view of the year. It’s the fight the UFC wants — president Dana White has made that very clear — and it’s easy to understand why. All that animosity between the two, which fans love, still exists.

You’ll notice there’s no mention of boxing or other entertainment appearances in this “ideal” year. Remember, this is McGregor’s ideal year in MMA, what it would take to put together perhaps the greatest year of all time in the sport. While 12 rounds in a ring with Floyd Mayweather or Manny Pacquiao would certainly help McGregor’s bank account, they would obviously interfere with his year in MMA.

If McGregor ran the MMA table in 2020 — with victories against Cerrone (who has the most wins in UFC history), Masvidal (the BMF, coming off a colossal 2019) and Nurmagomedov (the undefeated lightweight champion and McGregor’s biggest rival) — it would not only be the best calendar year of his career but also arguably the best year of all time.