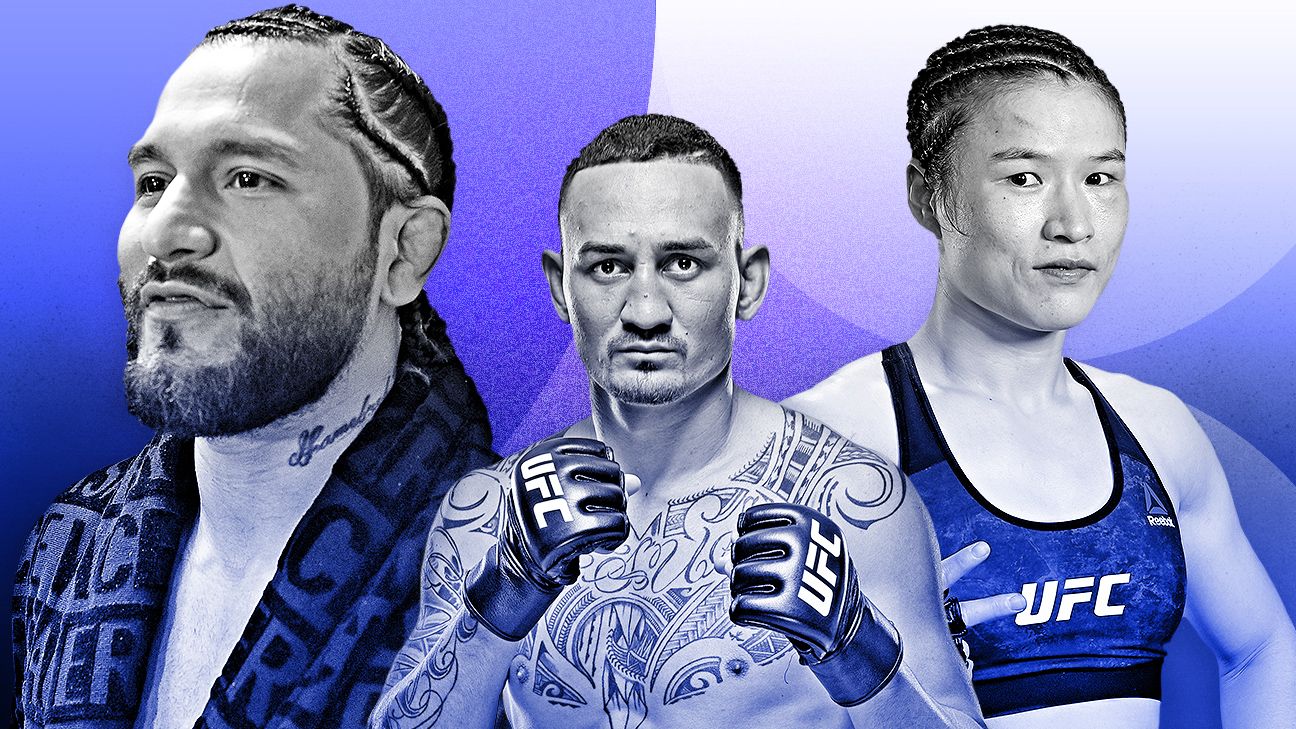 Brett Okamoto offers the outlooks for the fighters we ranked 11-20. Our breakdown of 21-30 can be found here.

2020 outlook: Poirier is coming off an up-and-down 2019. He earned a megafight against Khabib Nurmagomedov by upsetting Max Holloway in April. But the way in which he lost to Nurmagomedov in September — via rear-naked choke in the third round — just doesn’t provide much excitement in ever seeing that fight a second time. As such, Poirier has an uphill battle in 2020 when it comes to catching a big-name opponent. He’s still highly ranked and world-class, but he needs the right dance partner.

2020 outlook: Big things are brewing for Bellator MMA’s undefeated, 24-year-old 145-pounder. McKee already has advanced to the semifinals of the Bellator Featherweight Grand Prix. He could be on a collision course with two-weight champion Patricio Freire, which would be, arguably, one of the biggest fights Bellator has promoted in years. Freire is an established killer in Bellator. McKee is a legit phenom, with some of the highest potential in the entire sport (he was ranked No. 1 in ESPN’s top 25 MMA fighters under 25). If McKee keeps breezing through tests, 2020 will be huge.

2020 outlook: Benavidez has probably been the best flyweight in the world other than Demetrious Johnson for the past six years. But in all that time, he never got a UFC title shot because he’d already come up short in two title fights against DJ — in 2012 and 2013. Finally, in 2020, Benavidez has been granted his third attempt at a UFC championship. If he wins, it probably wouldn’t be enough to qualify as the biggest year in MMA, but it would certainly feel like it to him after all these years of waiting.

2020 outlook: Widely dubbed the most entertaining fighter in the sport, Gaethje always has a shot at a big year because of his talent and fighting style. The man is fun to watch, and he’s also quite good. If he could corral a fight against McGregor, that would obviously be a shortcut to the spotlight. Regardless of how things play out, and it’s uncertain in the lightweight division, Gaethje likes being active and he likes winning exciting fights. He’ll be relevant one way or another in 2020.

2020 outlook: Covington is at a slight disadvantage when it comes to 2020, as he’s still looking at some time off early on due to injury, but there are ways for him to still enjoy a big 2020. If he can somehow pick a fight with his former teammate and friend Jorge Masvidal, a grudge match between two former friends has a way of capturing the public’s attention. It’s far from a guarantee Covington will book that fight, but it’s in the realm of possibilities. He needs to win, and he needs his old buddy Masvidal to be part of the journey.

2020 outlook: Edwards has had to fight and claw for every ounce of attention and respect he’s earned, but it’s paying off as we enter 2020. He’s already scheduled to headline an event in London, against a former champion. If he impresses in that fight, the MMA world won’t have a choice but to take notice. Edwards has very tough matchups in front of him in Woodley and, potentially, defending welterweight champion Kamaru Usman, but if he wins those fights, his stock will skyrocket.

2020 outlook: No one in their right mind would have predicted Holloway would lose twice in 2019, but such was the reality as he dropped two decisions to Alexander Volkanovski (to whom he lost his UFC featherweight title) and Dustin Poirier (in an interim UFC lightweight title fight). That means the table is set for Holloway to have a big-time comeback in 2020. All of a sudden, Holloway has a lot of work to do in that featherweight division, if that’s where he chooses to focus his attention. And if he retakes the throne, that’s a damn good story.

2020 outlook: Ferguson’s path to enjoying the best 2020 of any fighter out there is pretty much laid out. He just has to win. Beat Nurmagomedov in April, and then maybe McGregor later in the year. Or perhaps Nurmagomedov in an immediate rematch? Either scenario would be massive and would send shockwaves through the entire sport. Let’s just say this: if Ferguson fights multiple times in 2020 and goes undefeated, he’ll probably be a consensus fighter of the year when all is said and done.

2020 outlook: Masvidal was a popular pick for 2019 fighter of the year, and he’ll be a popular pick again in 2020 if things fall his way. It will be hard for him to duplicate the kind of year he just had, although he is a potential foe for both Conor McGregor and UFC welterweight champion Kamaru Usman. If Masvidal wins a UFC title, he’ll have that sweet combination of bonafide superstar and champion, which would allow him to call out anybody he wants. It could certainly be another big year.

2020 outlook: Zhang has two big things going for her as she enters 2020. First, she’s the UFC strawweight champion. And second, the UFC is very much behind her, as she’s the first champion to ever come out of China. She’s going to get a promotional push, and she has plenty of big fights ahead, including her first title defense against Jedrzejczyk at UFC 248. Oh, and she’s also very, very good. She dethroned a beast of a champion in Jessica Andrade in just 42 seconds.