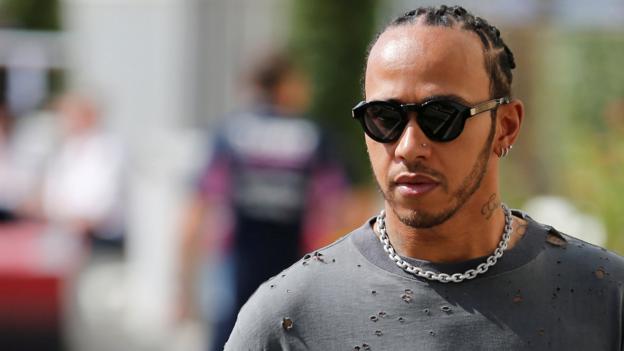 Lewis Hamilton says he is yet to start talks with Mercedes over a new contract with the team beyond 2020.

The six-time world champion’s deal with Mercedes runs out at the end of this season and Ferrari have admitted they have held talks with the Briton.

Hamilton said on Instagram that he and Mercedes F1 boss Toto Wolff “have not even spoken about contract yet. Nothing is being negotiated currently.”

He was responding to reports that negotiations had broken down.

Hamilton, referring to a report in Italy that talks had stalled over his demands, added: “Papers making up stories.”

The 36-year-old is still on his winter break and has been posting videos on his social media in recent days of him training and enjoying time with his father, Anthony, on what looks like a tropical island.

Hamilton has previously given equivocal statements about his future, saying at the Abu Dhabi Grand Prix at the end of last season: “I love where I am, so it is definitely not a quick decision to go and do something else.

“But it is only smart and wise to sit and think about what I want if it is the last phase of my career. Naturally I want to keep winning, I can’t tell you what will happen going forwards.”

In Abu Dhabi, Wolff put the chances of Hamilton staying at Mercedes at 75%, saying: “From the rational side everything speaks for continuation of the relationship from both sides. But equally there is a 25% chance we are not in control of. So we see how the next months pan out.”

Negotiations over a new contract have to be done face to face and, in the past, Hamilton has only started talks with Wolff once he returned from his pre-season training regime ahead of winter testing, which starts in Spain on 19 February. The season begins with the Australian Grand Prix on 13-15 March.

That is expected to be the case again this year, with the timing for any meetings dependent on their collective responsibility to ensure the team are as well prepared for the new season as possible.

Hamilton has the chance to equal Michael Schumacher’s all-time record of seven drivers’ titles this year.

Both are understood to have the intention to continue working together and it should be a question of refining the details of the contract until both are happy.

But it is inevitable that the situation will drag on for some months as Hamilton and Wolff navigate the busy schedule of an F1 season and their commitments.

If Hamilton had any thoughts of potentially leaving Mercedes, his views may be affected by the decisions by Ferrari and Red Bull to sign Charles Leclerc and Max Verstappen on to long-term contracts over the winter.

Leclerc is committed to Ferrari until 2024 and Verstappen to Red Bull until 2023, suggesting both teams see the drivers – the two biggest young stars in the sport – as their future.

Meanwhile, Ola Kallenius, the chairman of Mercedes’ parent company Daimler, has dismissed reports that its board is poised to discuss pulling out of F1.

Reuters asked Kallenius at a Germany Auto Industry reception in Berlin on Wednesday if Mercedes were planning to leave F1. He replied: “Not true.”

The report was by the British car-industry magazine Autocar and the racefans.net website, who said the issue would be discussed at a board meeting which it said would be on 12 March.

BBC Sport understands there is no board meeting scheduled for that date.

Mercedes, like nearly all F1 teams, has a contract with the sport that lasts only until the end of 2020.

The teams and F1 have been in negotiations for more than two years over the future shape of the sport.

New technical, sporting and financial regulations for 2021 were finalised last year but the terms of a new revenue distribution and governance system have yet to be agreed.

Mercedes have won the last six drivers’ and constructors’ titles in F1.

The car company said this month that its earnings halved in 2019 and that it faced charges of up to €1.5bn (£1.269bn) related to the diesel emissions scandal.

The company this year made its official debut in the all-electric Formula E series.

However, Kallenius said in an investor call last November that F1 was good value for the brand.

“F1 has been an activity in terms of our marketing and branding strategy that has paid off handsomely in the last few years,” he said.

“You have to look at these investments in a rational way.

“We weigh all our marketing and media investment in terms of reach, impact and cost.

“If you use the Nielsen method to measure the media value of our F1 activities, they are north of €1bn a year, so an extreme reach and impact from this activity and the costs that we would not like to disclose publicly are surprising low because there is a cost and revenue side in F1. We are committed.”

What you need to know ahead of the 2022 Presidents Cup
BCCI AGM set for October 18 in Mumbai
Source: Ga Tech board has special meeting Mon.
Owner: Udoka’s ban follows monthslong inquiry
LIV golfers petition OWGR chair to include results