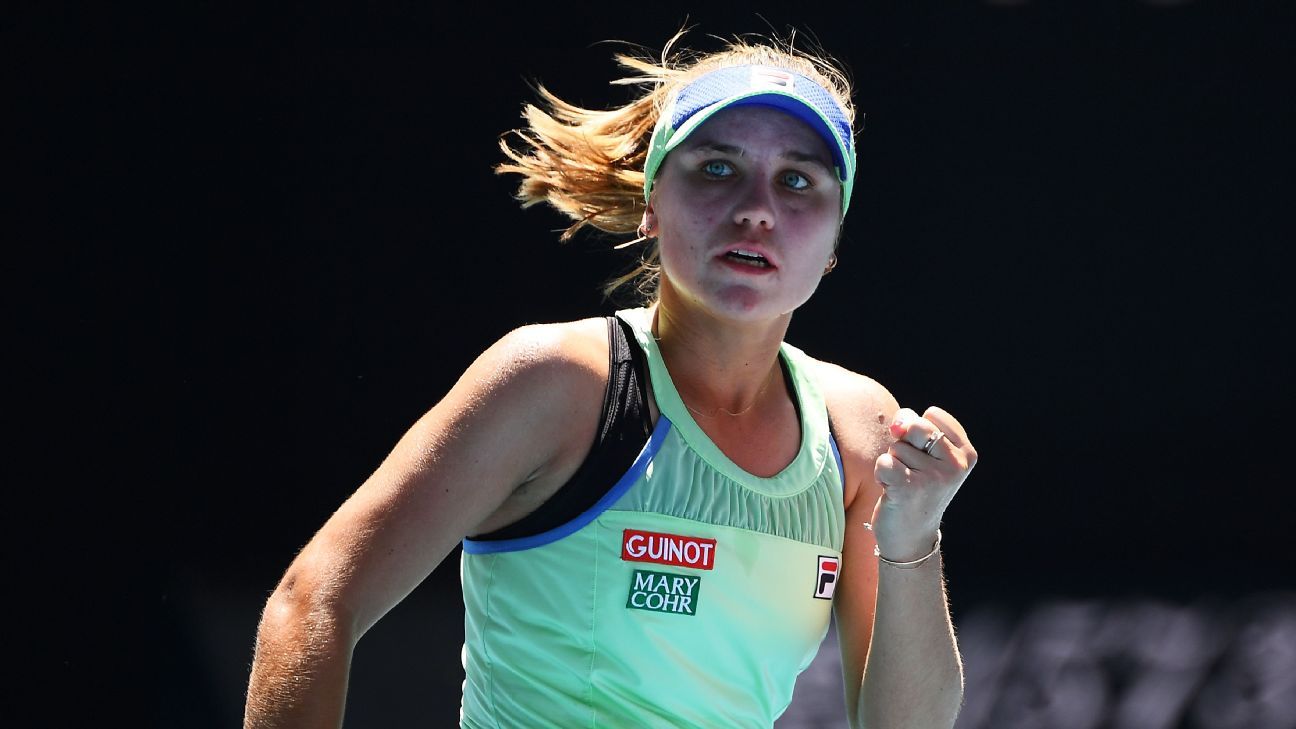 MELBOURNE, Australia — The headline on the front of a local newspaper’s sports page loomed everywhere at Melbourne Park on Thursday. “Halep lurks dangerously on Barty’s horizon,” it proclaimed, with an image of a victorious Simona Halep celebrating her win over Anett Kontaveit in the quarterfinals of the Australian Open the day earlier.

It seemed everyone was excited about what looked to be an almost inevitable finals clash between Halep, the two-time Grand Slam champion who advanced to the semifinals in just 53 minutes, and Ashleigh Barty, the world No. 1, reigning French Open titlist and homegrown favorite who was hoping to become the first Australian to win the singles title at the tournament since 1978.

But that’s the thing about sports: There are no guarantees. No matter what the odds indicate, or what the crowd wants, or even what the most compelling storyline may be, nothing is promised.

And Barty and Halep had to get past upstart Sofia Kenin and resurgent star Garbine Muguruza, respectively, first. As it turned out, those two had other plans for who would be playing in Saturday’s title match.

When Kenin, the 14th seed, stepped onto the court at Rod Laver Arena in the day’s first semifinal — her first appearance in such a round in a major — she didn’t seem concerned that she had been overlooked. Instead, the plucky American played with confidence and focus from the start. She blocked out an energized crowd, the weight of the stakes and the 100-degree heat to win in straight sets 7-6 (6), 7-5.

After an hour and 45 minutes in the grueling conditions, the 21-year-old American advanced to her first Grand Slam final. She dropped her racket, looked to the crowd in disbelief and put her hands over her eyes to hide her sobs. While she was happy in the moment, she insisted later that she was not surprised by the result.

“I’m not shocked,” she said. “It’s a dream come true for me. I’ve always dreamed about this. Of course, I believed in myself.

“I was playing, I knew I was in the semifinal. It was just great. I’m so happy I was able to share the court with Ash. Yeah, after the match, of course it’s pretty emotional. It’s the finals. It’s something different, it’s surreal. [I’m] so grateful for it.”

It’s a dream 16 years or more in the making. As the story goes, her parents had just a few hundred dollars to their name when they arrived in the United States from Moscow with their infant daughter in tow. Her father, Alexander, who remains her coach to this day, first put a racket in her hands when she was 5 and followed the blueprint of Maria Sharapova, the five-time Grand Slam champion who represents Russia but spent much of her upbringing in Florida.

He was determined to give his daughter the best opportunities to make it as a professional tennis player. She had her own website almost as soon as she began playing so people could follow her game. A prodigious talent with parents who clearly didn’t shy away from the limelight, she was on her first magazine cover at 6. The internet is filled with pictures of an adorable young Kenin smiling and posing with players such as Kim Clijsters and Anna Kournikova, or boasting about her ability to return Andy Roddick‘s serve (and declaring she would one day win Wimbledon) in an interview on the Tennis Channel as a 7-year-old.

This girl has become the goods! Kick ass and bring home the title @SofiaKenin So cool https://t.co/nlhMrIO3O8

Moments after her upset win over Barty, she was interviewed by Jim Courier, a two-time Australian Open champion. It was immediately clear she had been groomed for this moment her entire life when he asked her about playing a mixed doubles match as a 7-year-old against Venus Williams and Todd Martin. “Do you remember who your partner was for that match?” he asked.

She thinks they won that match because she hated to lose. Even then. Losing isn’t something that she has done much of lately. She won three titles in 2019 — Hobart, Mallorca, Guangzhou — as well as advancing to the fourth round at the French Open. Kenin was named the WTA’s most improved player for her efforts. She has dropped just one set in Melbourne — to 15-year-old American Coco Gauff — and will enter the top 10 for the first time in her career in next week’s rankings.

After watching many of her peers get the lion’s share of the hype and the headlines recently, she’s ready for her well-deserved turn in the spotlight.

“I know people haven’t really paid attention much to me in the past,” she said. “I had to establish myself, and I have. Of course, now I’m getting the attention, which I like it. Not going to lie.

“My phone is blowing up these past two weeks. I haven’t been able to check normal, my Instagram, Twitter, everything. It’s blowing up. I love this attention. I’m enjoying every single moment of it.”

Garbine Muguruza speaks after her straight-sets victory against Simona Halep in an Australian Open semifinal.

While Kenin had been discounted, Muguruza had been all but counted out because of her disappointing results the past two seasons. After winning the French Open in 2016 and Wimbledon in 2017, as well as taking over the No. 1 ranking later that year, the expectations couldn’t have been higher for the Spanish star.

But she never made it to back to a Grand Slam final — until now, that is. She advanced to the semifinals at Roland Garros in 2018 but otherwise never made it past the fourth round. She was eliminated in the first round at Wimbledon and the US Open in 2019. Her ranking fell to No. 36 to end the year, her lowest since 2014. She spent the beginning of her offseason climbing Mount Kilimanjaro, something she said that helped clear her head and provide an escape from tennis, before reuniting with her former coach Conchita Martinez. They spent five weeks training in San Diego leading into the new year.

Muguruza, 26, opened 2020 with a semifinal appearance in Shenzhen and followed up by making the quarterfinals in Hobart before having to withdraw due to a viral illness.

Still, despite her recent success, her run in Melbourne has been a surprise to many. She has thrived on her underdog status — needing three sets in her opening two matches — but has progressively gotten more dominant and in control as the tournament went gone on. She beat two top-10 players, Kiki Bertens and Elina Svitolina, during her march to the semis.

When she took to the court at Rod Laver, in even hotter heat following Kenin’s win, she didn’t look fazed. With a significantly smaller crowd than the previous match, likely due to the disappointment of Barty’s loss, she seemed to feed off the audible “Vamos, Mugu!” cheers and the sight of the Spanish flag. Every point was hard-fought, and both players continued to find answers for each other throughout the slugfest, but it was Muguruza who managed to hold on.

Needing a tiebreak to close out the first set in the sweltering late afternoon sun, and finding herself trailing in the second, she eked out the victory over Halep 7-6 (10), 7-5, in two hours and five minutes. She clenched her fist after the last points, as Martinez and the rest of her box jumped out of their seats in elation.

“I wasn’t thinking I was down,” she said right after the match. “I was thinking, ‘Keep going, at some point you’re going to have your opportunity.’ I know I was facing Simona so I knew it was going to be a hard match. I was just hanging in there with all the energy I had.”

Muguruza became the first Spanish woman to reach a hard-court final since Martinez in 1998, and now looks to become the first unseeded champion at the Australian Open since Serena Williams in 2007. She insists she has enjoyed flying somewhat under the radar and not being in the spotlight as much. She has only allowed herself to think about her next match, and not beyond, throughout the tournament, and the mindset has finally paid off.

“You don’t think like that [being in the final at the start of the event], that’s two weeks ago,” she said. “You go day by day, you take each match as it comes. Now I have one final match on Saturday.”

Much to the shock of many, Kenin and Muguruza will meet on Saturday with the eyes of the world on them and the Daphne Akhurst Memorial Cup on the line. Entering the tournament, neither was considered anywhere near a favorite. Kenin was listed at 40-1, and Muguruza at 35-1.

It’s a matchup few predicted, but they both couldn’t be more excited for. It marks the realization of a dream for one, and the return to it for another. After Thursday’s heat, they will both need to some time to rest and focus on one of the biggest matches of their careers.

“Luckily, I have 48 hours to recover and get ready for the last match,” Muguruza said. “We train all our career to play on this court and [in front of] this crowd.”

They have only played each only once before, in the first round of the China Open in September. Behind five aces and a 70% win percentage on her first serve, Kenin was victorious in three sets 6-0, 2-6, 6-2. She remembers it being difficult.

“It was a tough match,” Kenin said, before she knew for sure who she would be facing. “She’s playing some really good tennis right now. She’s had some great wins. She’s not easy. She’s really aggressive.”

“It wasn’t a very good match from my side,” Muguruza added. “I think she played good. It was the first time we played, so it was good to have that match as a reference.

“It’s going to be a hard match. It’s the final of a Grand Slam. Doesn’t matter who is your opponent.”

She claims she won’t do anything differently over the next two days, and will simply do as exactly she’s done throughout the fortnight. “There’s no point to change anything now,” she said.

Kenin, however, will focus on the match and preparing for Muguruza’s game. As her opponent has shown, the chances to play in a Grand Slam final again are not guaranteed, and years can go by between such opportunities, so she’s going to make sure she stops and appreciates it before anything else.

“First I’m just going to be enjoying the moment,” she said. “You don’t experience this so often. Of course, I’m going to enjoy it. This is so exciting — literally [I’ve got] butterflies.

“I’m just going to also focus on what I need to do, focus on my game. I got here, it’s time to shine, do the best I can. Like I said, hopefully do something more special.”