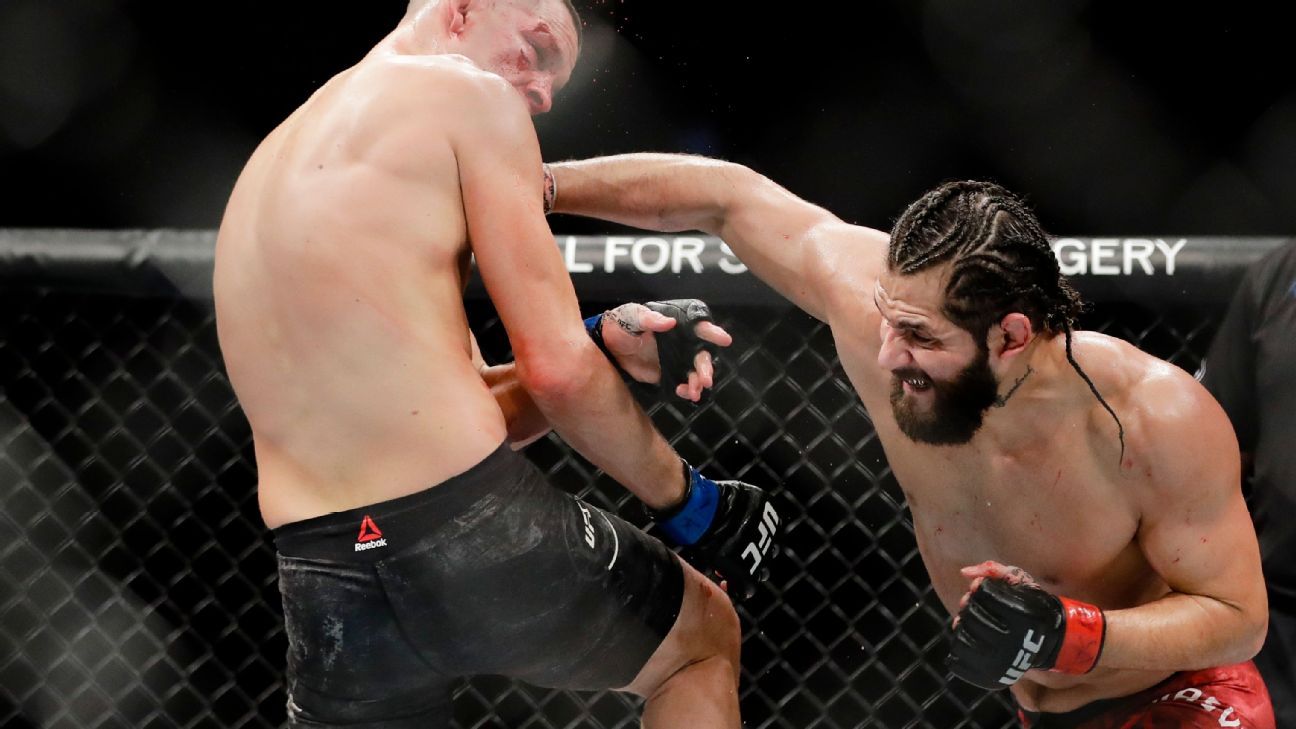 Jorge Masvidal has made it very clear that 2019 is in his rear-view mirror.

“That f—ing year’s over — 2020 is gonna be better,” the UFC welterweight star said after receiving the Helwani Nose Award for Fighter of the Year.

It is hard not to look back and reflect on what Masvidal did last year, though. He simply had one of the most incredible career turnarounds in mixed martial arts history. He was on a two-fight losing streak and slotted as a mid-card type of draw when the year began, and then Masvidal won three straight fights by devastating finish to become one of the biggest names in the UFC. The most recent victory was the UFC 245 main event on Nov. 2 against Nate Diaz at Madison Square Garden when he took home the invented BMF belt, which Dwayne “The Rock” Johnson wrapped around his waist.

Masvidal is arguably the hottest fighter on the planet. And yet, he was not collectively ranked among the top 10 fighters set to have the best year in 2020 by an ESPN MMA panel. What’s up with that?

Frankly, 2019 will be hard to top. That’s not to say it can’t be done; if anyone could do it, it’s “Gamebred.” But back-to-back fighter of the year awards is a tall task.

Last year, Masvidal was scratching and clawing to get to the top. He knocked out Darren Till and starched Ben Askren in a record five seconds, and his effectiveness against Diaz led to a doctor’s stoppage after the third round. On top of all that, Masvidal’s personality reached a broader audience after 16 years of relative anonymity. Fans connected with him, leading the Miami native to become one of the most popular fighters in the world.

Jorge Masvidal says he’s leaning toward fighting Kamaru Usman over Conor McGregor as he doesn’t like what Usman is saying about him.

This year won’t be about climbing the ladder and earning respect. Masvidal has done that. No, 2020 will be about making as much money he possibly can and potentially winning the UFC welterweight title. Picking his spots and staying patient for the right opportunity will be the best strategy for him and his First Round Management team.

Masvidal’s path right now is uncertain as he comes back from hand injuries he sustained in no small part by punching his opponents awfully hard in 2019. He is hoping for a comeback as early as April, although something closer to June would be ideal, he said earlier this month. A closer look at the UFC calendar makes it seem more realistic that the long-haired scrapper also nicknamed “Street Jesus” will return some time in the summer, perhaps for International Fight Week in July.

There is a fork in that path, as well. One leads to Conor McGregor and a massive money fight. Another leads to Kamaru Usman and the welterweight title. And a third runs right to a rematch with Diaz. Any one of these would be palatable to fans, would instantly make any UFC event a big deal and would make Masvidal a boatload of cash.

So yes, it is hard to figure out just where Masvidal’s year will take him, how many times he will fight and if he can somehow pull off another fighter of the year campaign. All of those reasons might be why he isn’t in the top 10 of a list as we try to scout out who will have the best 2020. That’s fine. Masvidal already has won by positioning himself as a top guy. He is a made man. Being first in some rankings? It isn’t super necessary.