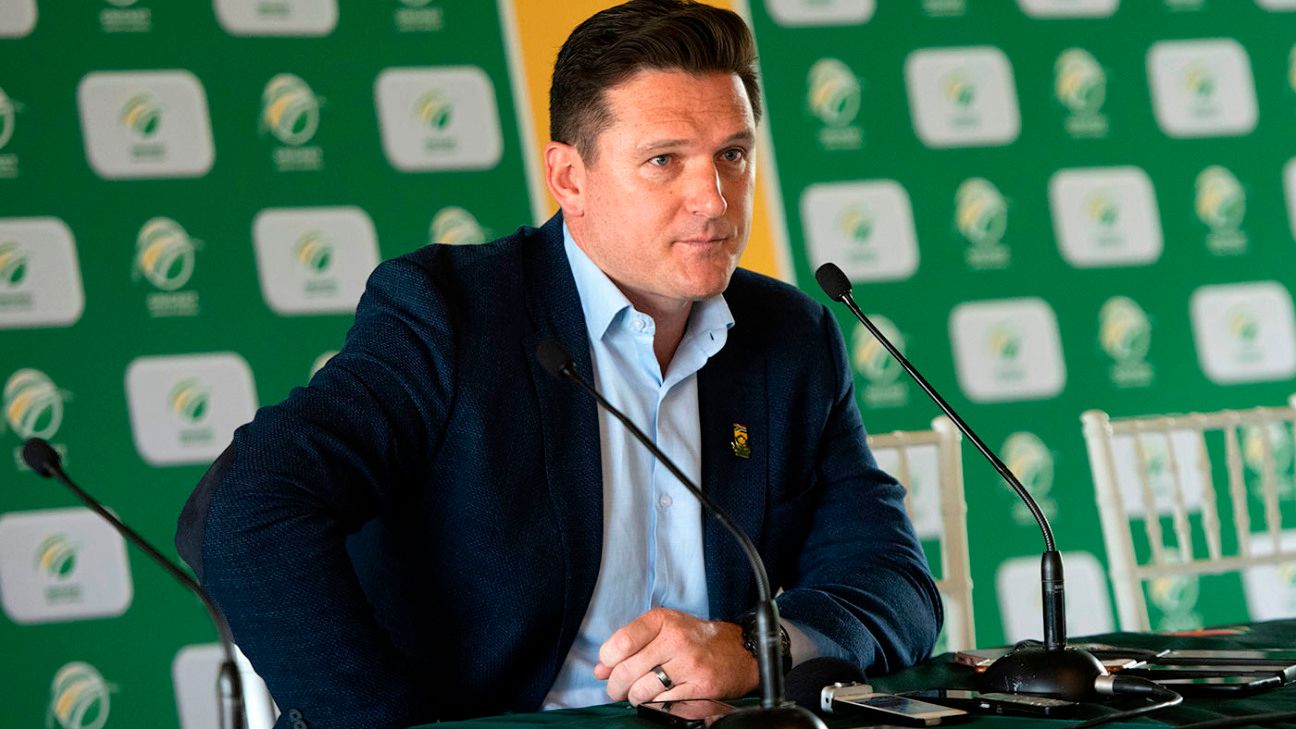 South Africa’s Under-19 program could be in line for an overhaul after the team’s failure to progress out of the quarter-finals at the age-group World Cup, which they are hosting. South Africa advanced second from their group, following defeat in the opening match to Afghanistan. The team also came into the tournament on the back of a poor 2019, in which they won just three out of 12 matches. This included a 0-7 whitewash against Pakistan, where they were comprehensively outspun.

“It’s disappointing. With the Under-19 program, the results have spoken for themselves. We haven’t been good enough,” Graeme Smith, CSA’s Acting Director of Cricket had said last week during an engagement with the media. “Right now, the program hasn’t been successful enough for us and we need to look at why and how we produce better players in that area.”

Under particular scrutiny will be the position of the coach, Lawrence Mahatlane, who has been in the job since 2014 when Ray Jennings’ contract was not renewed, despite him guiding a team including Aiden Markram and Kagiso Rabada to the World Cup trophy. Mahatlane has been in charge for three World Cups; South Africa came 11th in 2016, fifth in 2018 and cannot finish higher than seventh in this edition, where he had former South Africa assistant coach Malinbongwe Maketa working alongside him. Maketa, who worked with the senior men’s team under Ottis Gibson, is understood to be the favourite to succeed Mahatlane, as South Africa seek to create a structure that will produce both positive results and players for the future.

That is one of Smith’s many tasks, which involves overseeing all areas of South African cricket, and ensuring there is a steady flow of players filling up the talent pool. He aims to have a clear plan by the end of the current season when his short deal ends, while he also honours a commentary agreement for the IPL. Smith has confirmed that he intends to return to South Africa and occupy the role permanently, pending other CSA matters such as the future of suspended CEO Thabang Moroe.

“Hopefully by the end of this season, we can really dive in and look at how we can improve them and improve the results,” he said, mooting red-ball cricket as a potential solution. “Maybe we need to play longer version games, I don’t know. It’s been a very white-ball focused approach. Hopefully, in the next month or two, we can have a real plan.”

Smith himself is a product of the Under-19 system, having been part of the South African team that won the plate final in 2000. His team-mates included Johan Botha, Albie Morkel, Jonathan Trott, Jacques Rudolph and Thami Tsolekile, who all went to carve international careers, and Rivash Gobind, who is currently the Afghanistan national team’s assistant coach. For Smith, age-group cricket ensured he was part of CSA’s plans early on and taught him the importance of career-planning, something he is likely to want to see passed on to aspiring cricketers today.

“Coming through in my own time, I relied on the schooling system, Gauteng Cricket and we had some age-group academies in those days and maybe we need to look at that and identifying talent and how we give them some skills that can help kids at a younger age,” he said.

“Goal-setting for me came from (the age of) 11, 12 when I went to the academy. It wasn’t something I just read in a book. It was something I was exposed to at a young age when I was picked there.”

South Africa’s current development program system starts identifying talent and holding training camps from the Under-15 age group and holds winter camps from the Under-17 level both provincially and nationally. However, it is still the case that the bulk of the country’s cricketers come from a select group of elite schools, something which limits the scope of South Africa’s search for talent.

Given the recent slide South Africa’s senior men’s team has gone through, with a third successive Test series defeat, attention has turned to South Africa’s depth and questions over whether they have the resources to rebuild.

The results of the Under-19 team have not been promising in the last 12 months but defenders of the system will point out that recent graduates of the program include Thando Ntini and Sinethemba Qeshile, both of whom are playing franchise cricket this summer. Still, South Africans want to see wins, and this team has not provided many.

Warriors’ Curry (knee) exits in 2nd half; MRI next
Which Canucks and Islanders benefit from the Bo Horvat trade?
Tkachuk: ‘Honor’ to play as Panther in All-Star win
Ravens’ Tyler Huntley ignores critics with clutch Pro Bowl Games performance
No discipline for Zverev after abuse investigation