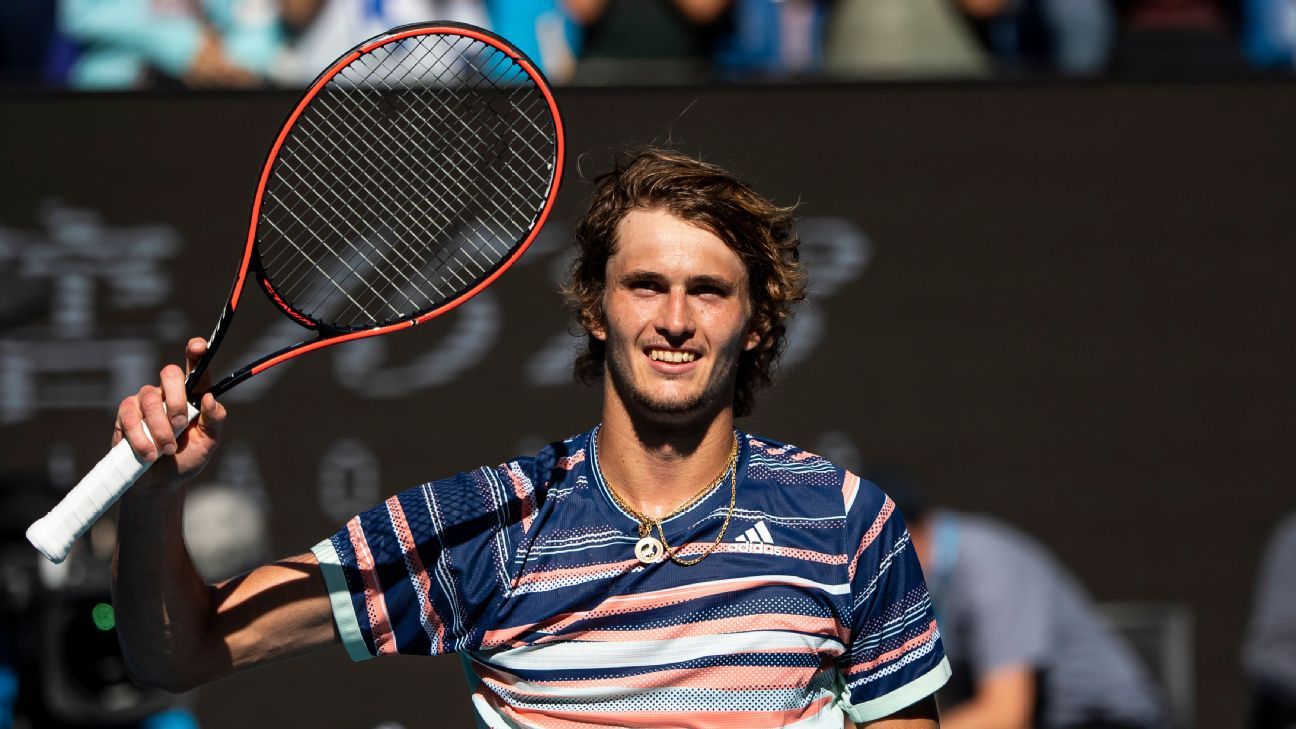 MELBOURNE, Australia — At the beginning of the fortnight in Melbourne, there wouldn’t have been too many Australian tennis fans rooting for Alexander Zverev. It’s not to say the seventh seed is someone who’s not worth rooting for, but the German simply pales in comparison to the likes of Roger Federer, Rafael Nadal and even homegrown hero Nick Kyrgios when it comes to the popularity stakes Down Under.

But after winning his first-round Australian Open match against Italian Marco Cecchinato on Day 2 of the tournament, Zverev made an announcement that instantly endeared him to the locals.

“I know I’m not the favorite to win this event, but if I win, I’m going to donate every single cent [of prize money] to the bushfires,” Zverev declared, before the capacity Margaret Court Arena crowd roared with approval.

The winner of this year’s Australian Open takes home a check worth a whopping AU$4.12 million (US$2.79 million). Initially, Zverev winning the title may have seemed like a pipe dream, but since making the generous pledge, he has gone on his greatest run at a major.

On Wednesday afternoon, he kept his Melbourne Park winning streak alive. Zverev, 22, came from a set down to blow 2014 Australian Open champion Stan Wawrinka off the court 1-6, 6-3, 6-4, 6-2, booking his place in the semifinals of a Grand Slam for the first time in his career.

Now just two wins away from making one of the heftiest athlete donations in history, one of the first questions he was asked in his postmatch on-court interview was whether or not he still planned to honor his word from earlier in the tournament.

“Yes, it is still true,” Zverev confirmed, once against to a monster cheer, this time from the Rod Laver Arena crowd. “I made the people of Australia a promise, and I will keep that promise. I hope I can make it happen.

“I’m not a money-driven person. Four million Australian dollars is nice, I could buy myself some cars, or something, but families need to rebuild their houses and their lives. It’s much more important they get that money.”

Later, after a shower, a bite to eat and a chance to reflect on the achievement of reaching the final four at a major for the first time, Zverev spoke about how his parents taught him the value of generosity.

“My parents grew up in the Soviet Union where you worked as a professional tennis player. My dad would make money outside the country, but he would have to give it away when coming back into the country,” Zverev explained. “They always said that money is something that should cause change in the world and put into a good thing. That you should help people, not put into a bank account and do nothing with it.

“Four million is a lot of money for me. I’m not Roger, I’m not LeBron James. But I know there are people now who actually need the money and depend on it. There is much better use than I have right now.”

Bushfires have been burning out of control around Australia since last September and show little sign of easing anytime soon. The devastation has seen thousands of homes destroyed, 29 people killed and in excess of 500 million wild animals destroyed. The tennis community has united in the crises, with countless players, sponsors and tournaments joining forces to raise millions of dollars.

For Zverev, the 2014 Australian Open boys’ singles champion, he just wants to “play his part,” and it’s something some believe is helping him focus positive energy on making a deep run at a Slam.

“Maybe donating to this cause has taken some pressure of him. Maybe it’s getting the best out of him,” tennis legend John McEnroe told ESPN. “He’s never gotten past the quarterfinals [at a major], so it would be pretty amazing if the first time he did it he would be donating his entire check.”

Zverev might be yet to break through at a major, but he’s already an ATP Finals champion and the only active men’s player outside the Big Three with three Masters 1000 titles under his belt.

After his victory over Wawrinka, Zverev opened up on why he believes it’s taken him until now to showcase his talent on the biggest stage.

“I was paying too much attention to the Grand Slams. I wanted it too much,” Zverev admitted. “I wasn’t talking to anybody; I wasn’t going out with friends. I was, almost, too focused. Everywhere else I was playing better tennis.

“It changed a little bit this week. I’m doing much more things outside the court. [It also helped] I came into the Australian Open with absolutely no expectations because I was playing horribly at the ATP Cup.”

Zverev’s new approach is working, and he now stands just two wins away from being the youngest major champion since Juan Martin del Potro prevailed at the 2009 US Open.

His next assignment is Austrian star Dominic Thiem, 26, who is also searching for his first Grand Slam title. The prize for victory will be a place in Sunday’s Australian Open final against either reigning champion Novak Djokovic or Federer.

One thing is a guarantee: Zverev will have far more Australians cheering for him in his semifinal (and final, should he get there) than he would have ever thought when the tournament began. After all, there’s more than 4 million reasons for the locals to cheer him on.

Sens’ Norris reinjures shoulder; done for season
Grand theft scooter: Francona’s ride gets swiped
Jets hire ex-Broncos coach Hackett as new OC
What to do with Dak Prescott: Three options the Cowboys must consider
‘You only fight him because you have to’: Why nobody wants to get into the ring with light heavyweight champion Artur Beterbiev