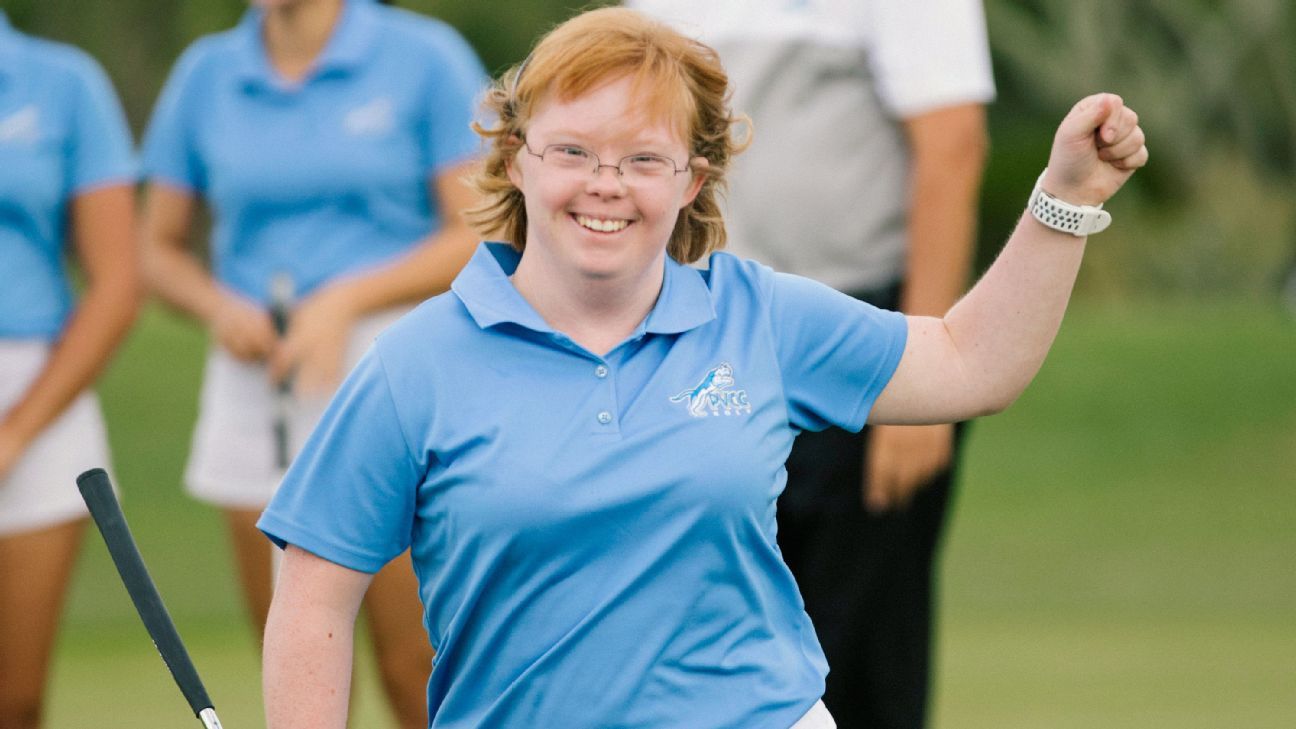 SCOTTSDALE, Ariz. — Amy Bockerstette returned to the 16th hole at TPC Scottsdale Wednesday, about a year after she made a par on the famous hole that catapulted her to instant celebrity, and walked off the green with a donation that’ll help kick-start her foundation.

Bockerstette, a disabilities advocate with Down syndrome, received a $25,000 check from the Thunderbirds, the civic organization that hosts the Waste Management Phoenix Open, and Waste Management for her I Got This Foundation, in a ceremony alongside PGA Tour golfer Gary Woodland, with whom she played the hole with last year.

“It was an incredibly generous gift from the Thunderbirds and Waste Management,” said Joe Bockerstette, Amy’s dad. “Our goal with the foundation is to pay it forward, to provide the same opportunities for other people with intellectual disabilities that Amy’s had. And we began the foundation by asking people to make a donation at Amy’s birthday party [in October] in lieu of gifts. And so, a very sizable gift from the Thunderbirds really goes a long way towards getting the foundation off the ground and up and running. So, we’ll put it to good use.”

Bockerstette walked the back nine of the TPC Scottsdale’s Stadium Course with Woodland’s group during the pro-am. She handed out hugs and high-fives throughout the course as fans stopped and cheered for her at every hole.

At the 16th, Amy and Woodland waited until the amateurs in the group played the hole, and then were introduced as fans around the arena-style hole were wearing green T-shirts with the foundation’s logo across the front. Amy received a standing ovation and the crowd broke into an “Amy! Amy!” cheer as she waved back.

Then the check was presented as she stood alongside Woodland prior to his tee shot.

Woodland said after playing nine holes that he was nervous before walking through the tunnel entrance to the 16th.

“I asked Amy when we were walking if she was nervous,” Woodland said. “She said, ‘no, I’m excited.’ I said, ‘I’m nervous.’ There were a lot of people in there. The energy was amazing. Seeing everybody put those shirts on is so cool. Obviously, the Thunderbirds giving Amy and her foundation the $25,000 is awesome. They will do amazing things with it. And it’s cool to see that and share that with her again.

“Obviously, we had a great day last year, but to continue that relationship, to be there today, to see everybody else involved, it’s one thing for us who have a relationship together, but everybody else, you feel like you know her and that’s what it’s all about. That’s so cool, and I was very glad that she was there today and I got to be there.”

Joe Bockerstette said the donation will help get the foundation off the ground. Some initial plans are to help fund clinics with the goal of helping people with intellectual disabilities learn how to play golf. Joe Bockerstette would like to ultimately host an annual 18-hole tournament for golfers with intellectual disabilities so they can “showcase their abilities.”

“Ultimately, the greatest thing about Amy being able to play golf the way she does is she can play golf with you or me or Gary Woodland or anybody who plays golf,” Joe said. “And so I’d like to see a larger group of folks with intellectual disabilities be in that same situation where there’s opportunities just to pick up a foursome somewhere and play.

“And in doing that, she’s able to influence people and become a role model for the community to show other folks that you can’t put limits on a person with Down syndrome and to show that they’ve got every right to be able to play, fit in belong, and have fun.”