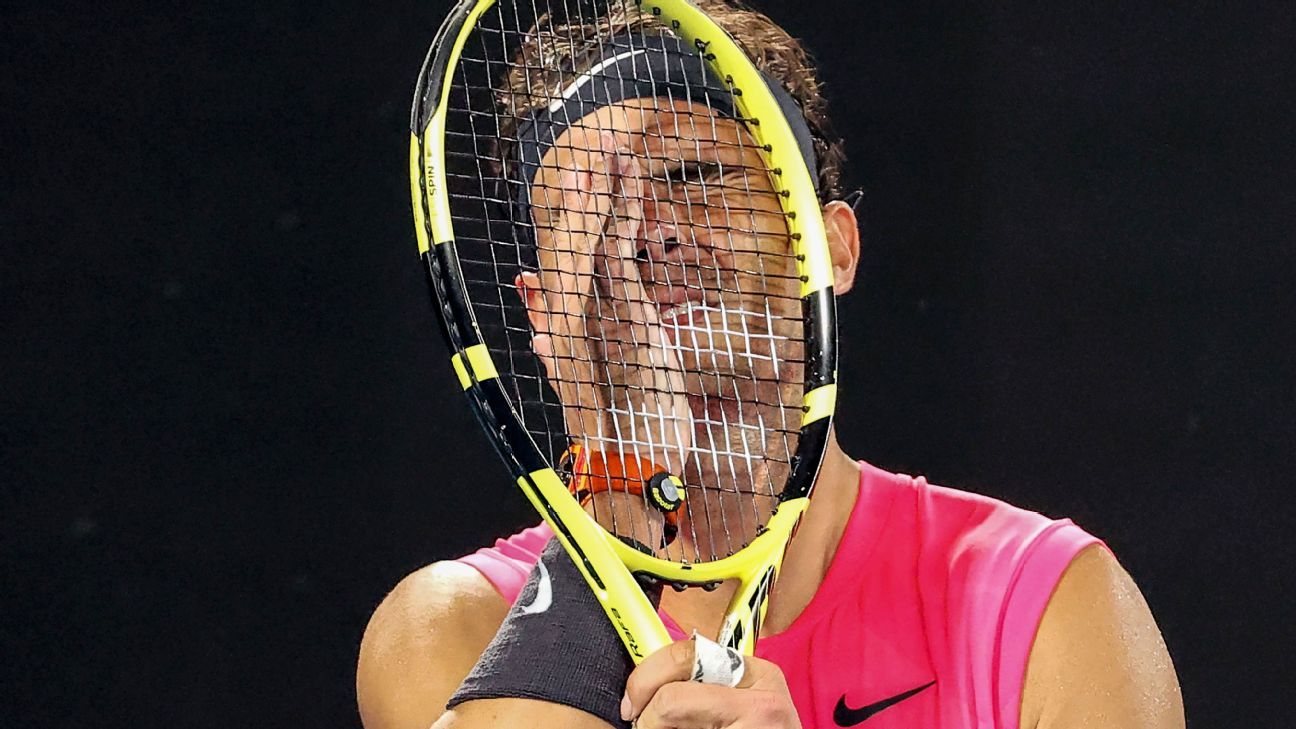 MELBOURNE, Australia — Even for legends of the game, there are times when they just have to say: “Too good.”

It took a barrage of brutal hitting from Dominic Thiem to end Rafael Nadal‘s title hopes at the Australian Open on Wednesday night, as the Austrian survived a nerve-addled finale to the match to win 7-6 (3), 7-6 (4), 4-6, 7-6 (6) and reach the semifinals in Melbourne for the first time in his career.

Having led by a break in the first two sets with a set point in the first, Nadal will be annoyed that he could not get ahead in the match and raise the pressure on Thiem, who goes on to face Germany’s Alexander Zverev on Friday.

But the Austrian deserves the credit for producing some stunning hitting throughout the match. Thiem played three fine tiebreaks and then, when the nerves started to make his body tighten up, got the job done in the end.

“It was such a mentally tough situation,” Thiem said of the moment when he served for the match at 5-4 in the fourth set only to crumble under the pressure. “I couldn’t handle it. But I did really well to win the tiebreak.”

On a warm evening at Melbourne Park, the pair thundered the ball at each other as if they were trying to break them in two. Some of Thiem’s shot-making was so astounding that even Nadal looked as if he could not believe what he was seeing.

Twice the runner-up at the French Open, Thiem never made it to the last four of any of the other three Grand Slams. Here he took the fight to Nadal, standing his ground under the might of the Spaniard’s forehand, ripping his own backhand with so much power, he had the crowd gasping.

It will be of comfort to Nadal that he played well, too, even if his quest for Grand Slam title No 20 — which would put him level with Roger Federer — will have to wait until Roland Garros in June. As the 12-time champion there, it would seem apt for Nadal to equal Federer on his favorite court.

His world No. 1 ranking will go if Novak Djokovic takes the men’s title on Sunday. Though Nadal was disappointed to lose, he was content that there was not too much more he could have done on the night.

“It was a very good match, good level of tennis,” he said. “He played very well, I think, playing very aggressive, great shots. Even from difficult positions, he was able to produce amazing shots. So nothing to say. Just well done to him.

“Of course, I am sad. I lost an opportunity to be in the semifinals of another Grand Slam. But I lost against a great opponent. And he deserved it, too. Well done for him.”

Beating one of the Big 3 (Nadal, Federer and Djokovic) is not easy, as Tennys Sandgren can attest to after missing seven chances to put Federer away in the quarterfinals. When Thiem suddenly buckled at 5-4, the Nadal camp looked at each other, wondering if their man could pull off a similar escape.

Nadal saved two match points in the fourth-set tiebreak to get back to 6-6, and the drama heightened when he let a lob from Thiem, despite being initially called in on the baseline, go, convinced it was out. His coach, Carlos Moya, looked anxious, but it was ruled out following review.

At that stage it seemed likely he would take it to a deciding set, but Thiem ripped a backhand across Nadal at the net for a winner, the touch off the net rubbing salt into the wounds on a night when Thiem had more than his share of luck with several net cords going his way.

On his third match point, Thiem was forced back by Nadal, but when the Spaniard’s forehand went into the net, Thiem stood, arms aloft, almost as if he had won his first Grand Slam title.

Nadal said the balls and cooling conditions as the match went on didn’t help him, but he will leave Melbourne with the knowledge that his game is in good shape, even if there will be a nagging feeling that he might have done better.

When Thiem pushed Nadal to a final-set tiebreak at the US Open in 2018, he showed that he was more than just a clay-court expert, that he was learning to play on hard courts. His victory in Indian Wells last March gave him added confidence, and he will take even more belief from the fact that he almost threw away his chance to beat Nadal before finally finishing him off.

“It’s a little demons in there, like Roger [Federer] said [after beating Sandgren],” Thiem admitted. “Everybody has it. I was just rushing it a little much, changing tactics from what I was doing the whole match, which was wrong. But that’s tennis, you have to deal with this in almost every single game. I’m very happy I won the tiebreak.”