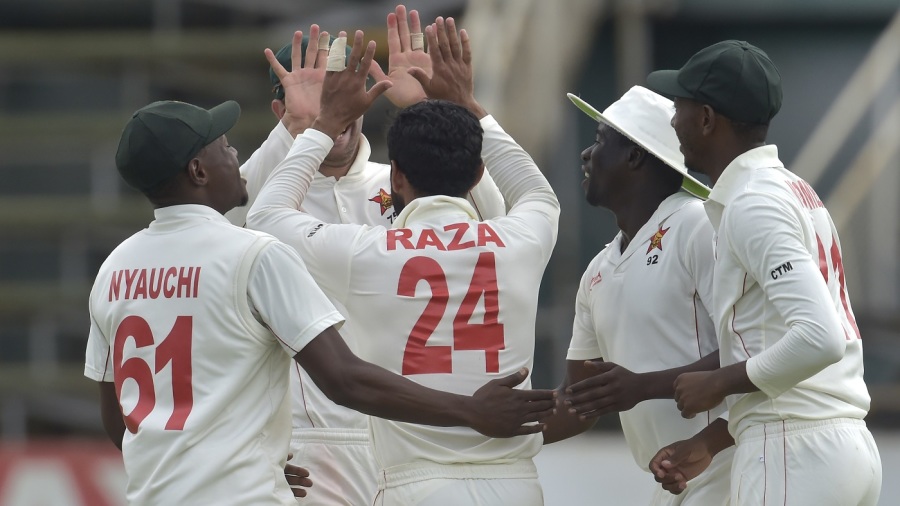 Angelo Mathews’ 35th Test fifty rescued Sri Lanka from a precarious position in the first hour of play as Sri Lanka added 104 runs for the loss of three wickets on the third morning, though they remain 180 behind Zimbabwe’s first-innings total.

Sikander Raza, meanwhile, provided the star turn for the hosts, picking up two wickets in the first hour, and then ending a threatening partnership between Mathews and Dhananjaya de Silva at the stroke of lunch.

Zimbabwe, however, will be concerned about the well-being of Kevin Kasuza who was struck on the head when fielding at short leg for the second time in two matches and was stretchered off the field.

It was the ricochet of Kasuza’s helmet though that had given Zimbabwe the first breakthrough of the day. After a slow start to the session, Kusal Mendis pulled a short one from Raza hard and straight at the short leg fielder, the ball looping off Kasuza’s helmet to Carl Mumba at square leg.

Raza struck again in his next over when Dinesh Chandimal, who had been looking to attack during his short stay, offered a straightforward return catch.

At that point, most of the session had been a case of feast and famine for the Sri Lanka batsmen. While each of Mendis, Chandimal, Mathews and Dhananjaya had struck Raza for a six, in between there were long periods where the Zimbabwe seamers had diligently probed outside off stump, frustrating the Sri Lankan batsman.

But following Raza’s double strike, Mathews and Dhananjaya managed to blend aggression and patience over the remainder of the session, adding 84 for the fourth wicket in just under 22 overs.

Mathews, in particular, looked in good nick, not allowing the fall of quick wickets at the other end to faze him. Though he was mostly content to simply occupy the crease, only coming to life for brief periods, like when he twice slog-swept Raza for six behind square leg.

Dhananjaya was a little more industrious in looking for singles, though he too wasn’t afraid to attack the spinners if play seemed to lull for too long. Neither batsman though was keen to attack the seamers – unless the ball was pitched up – and therefore it was unsurprising to see Zimbabwe take the new ball at the first available opportunity.

It was the relative comfort with which the pair had proceeded that made Dhananjaya’s late brain fade – being bowled while attempting to pull a short one from Raza – all the more galling for the visitors.