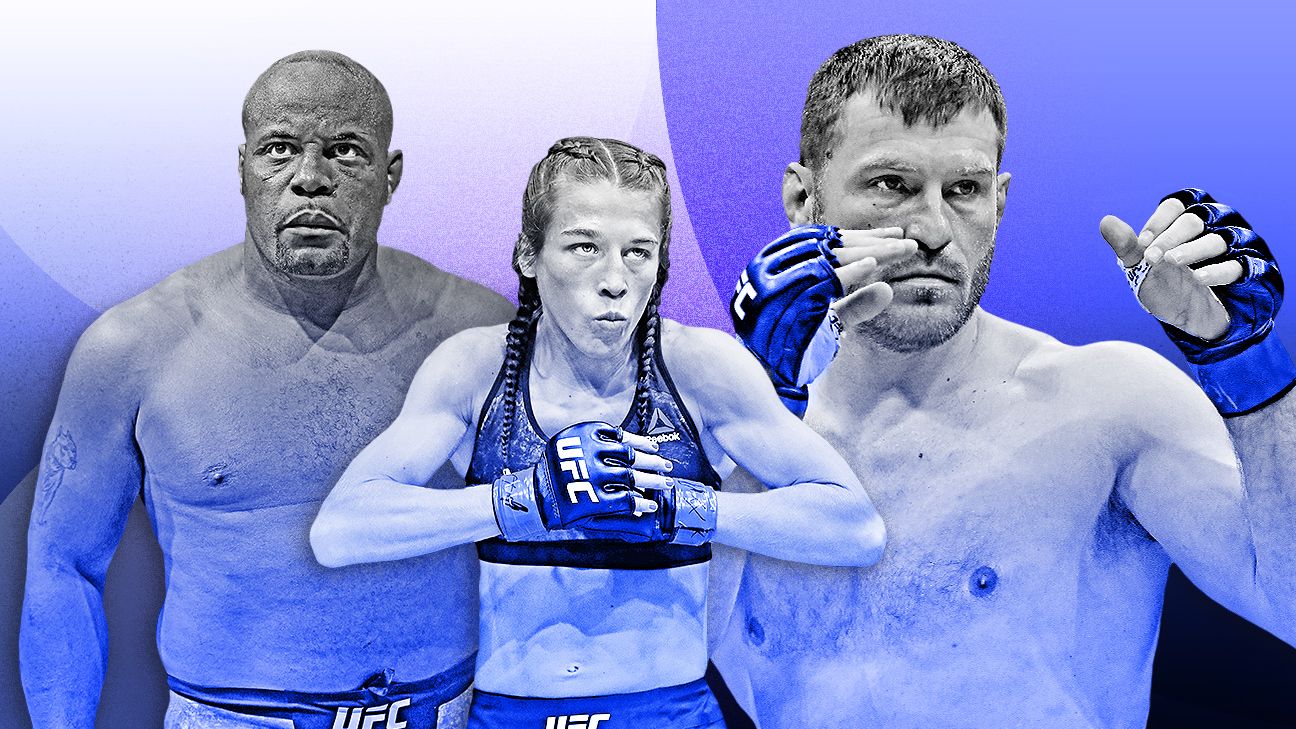 Without further ado, here’s a look at the fighters who are in for the best possible year in 2020, starting with entries 21-30, written by Marc Raimondi:

2020 outlook: A middleweight title shot against Israel Adesanya was right there for Costa, but a biceps injury has sidelined him until sometime in the second quarter of 2020. Presumably, the 28-year-old “Eraser” will face the middleweight champion next, whether that’s Adesanya or UFC 248 challenger Yoel Romero. Costa already owns a win over Romero and has won all five of his UFC fights. Romero is the only man in the UFC that Costa has not finished. It’s not out of the question to think that the chiseled Brazilian slugger with the Hollywood good looks could be 185-pound champion before the end of the year.

Next fight: Miocic or retirement

2020 outlook: Cormier’s year will consist of only one fight, if he fights at all. It’s Stipe Miocic or bust for the former UFC heavyweight and light heavyweight champion. If Miocic is still sidelined with his eye injury by summer, Cormier said recently that he could just retire. Win or lose in a potential trilogy fight with Miocic, Cormier plans to retire afterward. If Cormier, 40, gets that chance against Miocic again — they are 1-1 — and wins, DC would add to his already tremendous legacy by becoming a two-time heavyweight champion. If it doesn’t happen, Cormier will still depart as one of the best ever.

2020 outlook: Diaz’s 2020 is completely up in the air. He has a potential rematch waiting for him against Conor McGregor or Jorge Masvidal, and he’s still among the biggest draws in the UFC. Diaz has shown patience before. He held out three years before returning to beat Anthony Pettis last August, which set up the UFC 244 main event against Masvidal for the BMF title, which he lost via doctor’s stoppage. Diaz told ESPN that he will wait to see how things shake out over the next few months before making a move. Diaz will return, he said, only “when the time is right.”

2020 outlook: Andrade upended what many expected to be a long strawweight title reign for Namajunas at UFC 237 last May. Andrade slammed Namajunas on her neck for a knockout victory, in a bout in which Namajunas looked excellent up until that point. Namajunas, who had held the title since 2017 but defended it only once, has not fought since then. The two will have a rematch at UFC 249 in a bit of clever booking by the UFC. If the 27-year-old Namajunas wins, expect her to get a title shot in her next fight, whether that’s against Zhang Weili or old rival Joanna Jedrzejczyk.

A title shot would not be out of the question for Yan in 2020 — especially after his violent performance in a TKO win over Urijah Faber at UFC 245 in December. The 26-year-old Russian has won all six of his UFC fights and it looks like he’s going to be a problem for others in the bantamweight division for the foreseeable future. Yan probably needs another victory, maybe two, to get a chance at the belt, and the wins must come against a top-ranked opponent. It’s clear that the aptly nicknamed “No Mercy” could be in for a big year.

2020 outlook: It almost seemed like a foregone conclusion that Suarez would get a title shot in 2019. But then Namajunas dropped the UFC strawweight title to Jessica Andrade, Suarez reinjured her neck and Andrade lost the belt to Zhang. Suarez is still recovering from that neck injury — one she has dealt with since her amateur wrestling career — and there’s no timetable for her return. When she does come back, the 29-year-old California native will be expected to continue her dominance en route to an eventual title opportunity. Many have her pegged as a future champ.

2020 outlook: Shahbazyan might be the best prospect right now in all of MMA. At just 22 years old, the California native is 11-0 with four straight UFC wins. The last three have come via finish within 2:27 of the first round. Shahbazyan knocked out durable veteran Brad Tavares at UFC 244 in November. He’ll be back in action at UFC 248 against Derek Brunson. If he beats Brunson and wins again after that, it would not be inconceivable that he could earn a middleweight title shot. Shahbazyan is the longtime student of Ronda Rousey‘s coach, Edmond Tarverdyan.

2020 outlook: The former UFC women’s strawweight champion has a chance to regain her title against Zhang Weili, and if she does so, it would be a remarkable comeback after some difficult years for the Polish fighter, inside and outside the Octagon. Since 2017, there have been troubling weight cuts, a split with managers and significant others, and a pair of tough losses to Rose Namajunas. Jedrzejczyk, who has won two of her last three, has a chance to wipe the slate clean with a victory over Zhang. Jedrzejczyk has a chance in 2020 to once again cement herself as one of the best women’s fighters in UFC history.

2020 outlook: Alexander Volkanovski dethroning featherweight champion Max Holloway might have thrown a monkey wrench in Magomedsharipov’s year. Magomedsharipov would have arguably been the next in line to fight Holloway, but now it seems the UFC is leaning toward Volkanovski vs. Holloway 2 sometime in the first half of the year. That means Magomedsharipov will likely have to win at least one more fight before getting a title shot. The Dagestan native has won 14 straight and all six of his UFC fights.

2020 outlook: The UFC heavyweight champion’s 2020 is very much unknown, thus his ranking outside the top 20. Miocic is still recovering from a retina injury he suffered from accidental eye pokes in a fight at UFC 241 against Cormier back in August. Miocic had surgery in September and might need another, his agent Jim Walter recently told ESPN. While the hope is that Miocic will fight again before the end of the year, Walter said Miocic won’t step into the Octagon unless he’s fully confident in the health of his vision in the near future and beyond. For a variety of reasons, it’s anyone’s guess if the belt is still around Miocic’s waist at the end of this year.