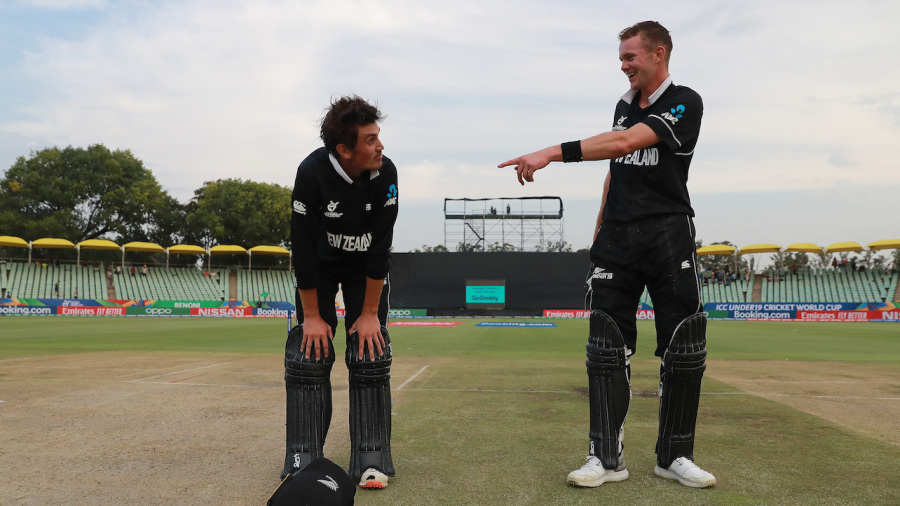 New Zealand’s No. 9 Joey Field and No. 10 Kristian Clarke put on an unbeaten 86-run ninth-wicket stand to take New Zealand through to the semi-finals of the Under-19 World Cup. They knocked out West Indies – who entered the game unbeaten through the competition – in a dramatic two-wicket win in Benoni to set up a semi-final clash against either South Africa or Bangladesh.

It seemed New Zealand’s tournament was going to be over when they were reduced to 153 for 8 in their chase of 239. Field and Clarke, however, put on a heroic stand and took the game to the last over to eventually win with two balls to spare. Clarke’s contribution wasn’t only with the bat; his 4 for 25 had helped bowl West Indies out for 238. It wasn’t even the first time Clarke’s heroics with the bat had saved New Zealand. In their must-win game against Sri Lanka in the group stage, he had had struck a final-over six to secure New Zealand’s spot in the knockouts.

The game had begun with West Indies opting to bat, but they lost their openers inside ten overs to be 32 for 2. Kevlon Anderson (33) and Kirk McKenzie then added 78 runs to take West Indies past 100, and a 73-run fourth-wicket stand between McKenzie and Antonio Morris (31) set West Indies up for a solid total. However, a collapse triggered by Clarke and left-arm spinner and captain Jesse Tashkoff saw West Indies crumble from 183 for 3 to 205 for 8 in the space of 7.3 overs before they were bowled out for 238 in the 48th over. McKenzie, who had retired hurt earlier, returned to be dismissed for 99 as the last West Indies batsman. Once he was dismissed, New Zealand’s players carried McKenzie off the field since he was suffering from cramps.

In reply, New Zealand lost opener Ollie White for a duck early and Rhys Mariu, their top-scorer in the tournament, soon followed for 26. Fergus Lellman and Tashkoff fell within the space of four deliveries as New Zealand’s score read 67 for 4 after 15.1 overs. A brief recovery from Quinn Sunde (32) and Simon Keene took them to 118, but once the former was trapped lbw, New Zealand crumbled again. Ashmead Nedd, the left-arm spinner, was the architect of the middle-order collapse, taking three wickets in a space of 15 deliveries between overs 31 and 35.

At 153 for 8, West Indies were roaring and had one foot in the semi-final, but Field and Clarke then put on a show to take the game away from them. New Zealand needed 45 from the last four overs but two expensive overs – by Matthew Forde and Nyeem Young – brought the equation down to 17 off 12. The 49th over, delivered by Forde, lasted eight deliveries and went for 10 runs with the left-arm quick delivering two wides. It meant New Zealand needed seven off the final over, and they got there after Field struck a four on the second ball of the last over. Clarke’s 46 was the highest score by a No. 10 in the Under-19 World Cup history while their partnership was the highest for the ninth wicket in a chase.