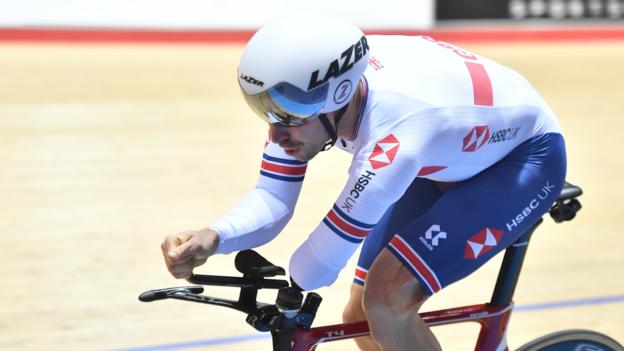 It was during his second tour to Afghanistan, two weeks away from returning home, that Jaco van Gass was hit by a rocket-propelled grenade.

“To suddenly wake up having quite a few bits missing, not being able to feed yourself or go to the loo, it was quite a big shock both mentally and physically,” he tells BBC Sport.

“It took some time to convince myself that everything would be alright, there were times that I did wonder why I was still alive and wished I was actually dead. But you recognise that there must be some reason why you have survived.”

Since that night in August 2009, Van Gass has refused to let his injuries define him.

In 2011, he was a member of the record-breaking team of wounded soldiers who trekked to the North Pole. He has climbed Denali, attempted Everest (only missing the summit due to poor weather conditions), run several marathons and become an accomplished downhill skier.

Now 33, he is also a para-cyclist on the Great Britain team, hoping to “fulfil his dream” of competing at a Paralympic Games.

This is his story.

Born in South Africa, the 20-year-old Van Gass sold all of his possessions and moved to the UK to enlist in the British Army. “I wanted the challenge, I wanted to join something esteemed and established,” he says.

He signed up to become a paratrooper, and was one of only 22 – of the 108 who started – to pass P Company. In 2008, he completed his first tour to Afghanistan before returning a year later.

A fortnight before the end of that tour, Van Gass’ platoon were deployed on one of their last operations on the eve of the Afghanistan elections.

“We got intelligence that an IED (improvised explosive device) facilitator was planning to disrupt the elections,” Van Gass explains. “We went after this guy and caught him, the potential suicide bombers and their equipment.

“On the way back into the desert where the helicopter was to pick us up, a call came over the radio that the pilot wasn’t happy with the landing site and so he gave us coordinates for a new pick-up point. The first pick-up point was a proven route, but the second one wasn’t.”

As part of a two-man sniper team, Van Gass was carrying a set of telescopic ladders attached to his backpack. Everything was happening under the cover of darkness. The clock having ticked past midnight, it was now Van Gass’ 23rd birthday.

“About half an hour into the walk, we came across what was only later established as a Taliban stronghold. We saw a few guys patrolling, we confronted them and conducted some searches but a few shots were fired from a different firing point.

“This initiated quite a big fire fight, and about 40-45 minutes in, two RPGs were fired. The first one exploded in the distance but the second one was fired low and ricocheted off the ground. At this stage, I was covering my sniper partner, and while he was putting on a fresh magazine, this rocket hit me.

“As I twisted my back, the rocket hit [the ladders] and that initiated the explosion. I knew I had lost my arm. I was in a pretty bad way.”

Van Gass was flown home to the UK, where extensive rehabilitation followed. In total, he had 11 operations on his injuries.

“Mentally it was very tough,” he says. “At that stage in my life, I was probably the fittest and strongest I have ever been, and just in a great place. I loved the job I was in and I was just enjoying life, being a young lad in the Army.”

His military career now over, Van Gass found himself in need of a new challenge. That came in the form of a charity trek to the North Pole, Van Gass one of a four-man team of injured soldiers who took on the unsupported challenge in aid of Walking With The Wounded. They completed the 190-mile trek in 13 days, joined for four of those by Prince Harry.

And Van Gass hasn’t stopped since. This is a man who always needs a challenge in front of him, something to give him a purpose and a focus in life.

“Mine have always been quite extreme,” he says. “I don’t think it’s always necessary for everyone to take on something as extreme as North Pole expeditions or Everest or the Paralympics. Even just walking to the corner shop could be a challenge for someone, and that’s a good challenge to have.

“It keeps me active and busy and it keeps me fit, and if I’m quite focused on something, I don’t have time to think about all the other stuff.

“I guess you could call it part of a coping mechanism. It’s certainly driven me to become a better person.”

‘One of the challenges I set myself’ – Paralympic aspirations

There is, though, one challenge Van Gass has yet to conquer. Inspired by London 2012, becoming a Paralympian is one itch he has yet to scratch.

Van Gass fell in love with cycling at a young age, initially as rehab after injuring his knee while playing rugby. He found it a good “head cleanser” – a role it would continue to play later in life.

Yet it was some time after being injured that he finally got back on a bike. He joined the British Cycling set-up in 2013, but missed out on a place in the squad for Rio 2016.

That disappointment forced him to take a break from the sport in 2017. “I had to go and find that love and passion for cycling again,” he says. “I just needed to not look at a Garmin, and just go and ride my bike.”

The flame reignited, he has since won world medals on both the track and road, and on Thursday he will start his campaign to bring home more silverware at the Para-cycling Track World Championships in Milton, Canada.

While his main focus will be on the individual pursuit, Van Gass will also compete in other events including the scratch race and team sprint.

“This is the biggest opportunity to prove myself towards Tokyo,” he says. “When it comes to the World Championships, everyone wants to be in the best place possible. It’s a Games year, so other nations and other athletes have a lot to prove, so this is a mini Paralympics.

“You’re there to shine, but there’s quite a bit of pressure.”

Van Gass goes into the championships having been re-classified from a C4 cyclist to a C3 last year, a change he had long been pushing for.

“I’ve always felt that wasn’t the right classification, but in my Jaco spirit, I took it on the chin and just thought I would see how good I could get as a C4,” he says.

“This was my last opportunity to put a case forward of why I should be a C3. I’ve done that successfully. This is by no means any easier in the slightest, in fact it’s probably harder because the C3 is one of the biggest classes there is.

“I’m training harder than ever before. Just because I went from a C4 to a C3 doesn’t mean it’s any easier or the competition is any less.”

Just seven months remain until the Paralympics in Tokyo get under way. The World Championships mark the last big event before the Games for athletes to lay down their marker and impress selectors, and Van Gass is going to give it his all.

“I don’t take anything on light-heartedly. When I do something, I do it properly and to potentially get selected for Tokyo would be absolutely amazing,” he says.

“It’s a dream I’ve had for a very long time. It would be the fulfilment of one of the challenges I set myself.

“It would mean a great deal. If selected, I truly want to show not just Great Britain but the world that I truly deserve that place and will do my very best.”