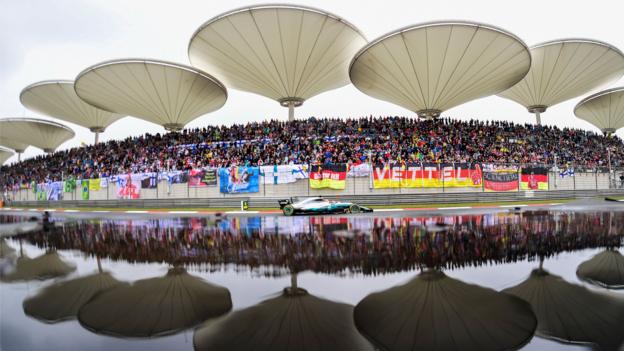 Formula 1 says it is “monitoring” the effects of the coronavirus outbreak in China in the context of the country’s Grand Prix in April.

The UK Foreign Office has adjusted its travel advice to warn against all non-essential travel to China.

F1 said it was “monitoring the situation in China closely” in tandem with the race promoter and motorsport’s governing body the FIA.

The move comes “in light of [the] advice from the Foreign Office”.

Protocols dictate that any request to cancel the race has to come first from the promoter.

“We are monitoring how the situation develops and we are in constant contact with the FIA and Formula 1 for further insights,” said a statement from the Ferrari team.

The last grand prix to be cancelled as a result of an emergency situation in the host country was the 2011 Bahrain Grand Prix, after protests erupted in the Middle Eastern state as part of the Arab Spring.

British Airways has suspended all direct flights to and from mainland China because of the coronavirus outbreak, which has caused more than 130 deaths, spreading across China and at least 16 other countries.

The number of cases of the virus in China has reached nearly 6,000 and Wuhan and the wider Hubei province are effectively in lockdown, with strict travel restrictions.

Hundreds of British citizens being flown back to the UK from Wuhan on Thursday will be put in quarantine for two weeks following their arrival.

Australia, Japan, the US and European Union nations are also repatriating citizens.

The Chinese Grand Prix is not the only sporting event under potential threat from the virus outbreak.

The World Indoor Athletics Championships, which were due to be held in Nanjing, 500km (300 miles) from Wuhan, on 13-15 March, have now been postponed.

In Australia, the Chinese women’s football team have been put in quarantine before their planned World Cup qualifying matches next month.

Meanwhile, the all-electric Formula E series is due to hold a race in Sanya, southern China, on 21 March.

Formula E says it is also “closely monitoring” the situation in China in tandem with local authorities.