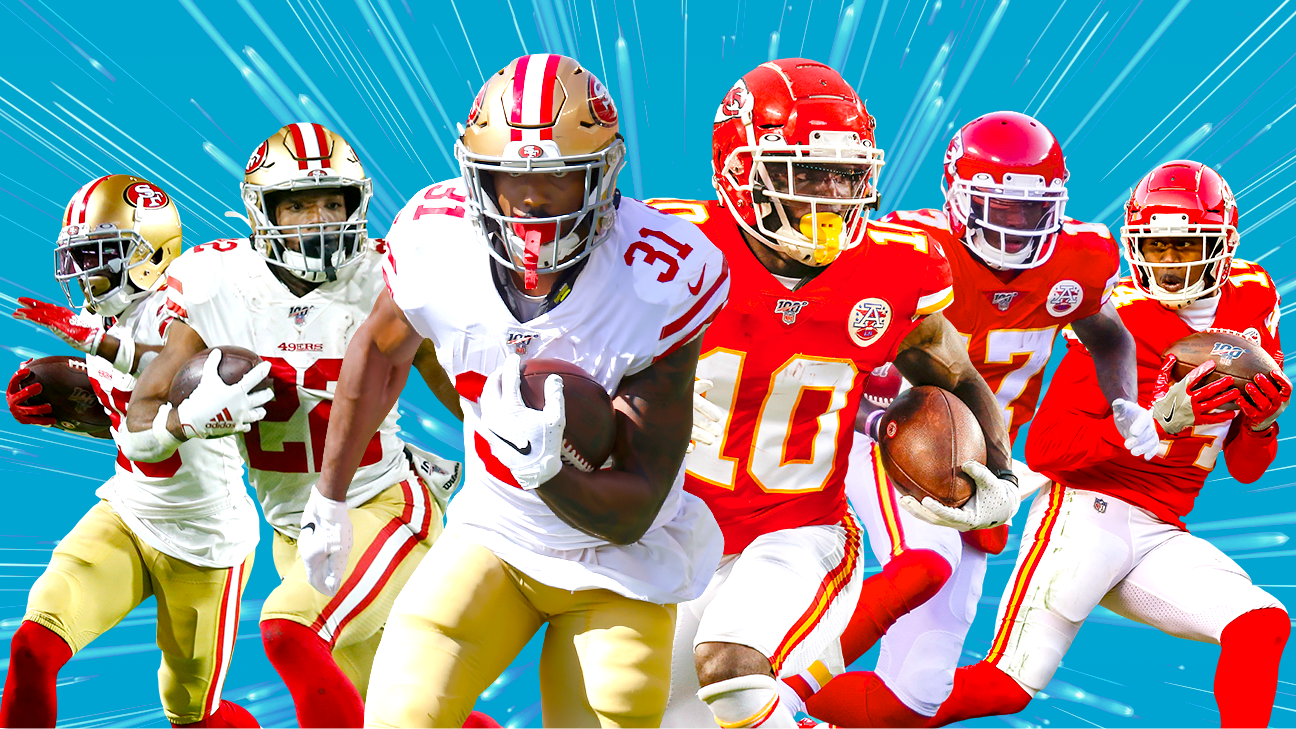 MIAMI — Ask San Francisco 49ers running back Raheem Mostert, himself a former Big Ten sprint champion at Purdue, which teammates he’d choose to form a 4×100 relay team and he pauses for just a moment before rattling off four names.

Notice a pattern? Yes, Mostert named all four of the team’s running backs (with apologies to Kyle Juszczyk, who would undoubtedly be in the discussion for the league’s fastest fullback).

“Honestly, it could be the guys in the running back room,” Mostert said. “I’ll take them.”

Of course, neither the 49ers nor the Kansas City Chiefs are actually preparing to run a relay this week ahead of the Super Bowl on Sunday (6:30 p.m. ET, Fox), but if they were, you’d be hard-pressed to find two rooms better equipped to do it than the Niners’ running backs and the Chiefs’ wide receivers.

“We are the home run team,” Watkins said. “We can throw deep. We’ve got all these track runners, all these thoroughbreds. … We can possibly be unstoppable.”

Both groups have the same illness that plagued “Top Gun” hero Pete “Maverick” Mitchell: the need for speed.

Lest anyone think that speed is limited to running in shorts and workout shirts, 49ers defensive coordinator Robert Saleh would encourage you to simply turn on the tape.

“It almost looks like they got their roster from the Olympic relay team and threw them all on the football field,” Saleh said. “They’re the fastest team by far. To try to compare it to another team would not do them justice, to be honest with you. But, anytime you have speed like that, it naturally will stress the defense.”

Kansas City tight end Travis Kelce says speed allows the offense to do “anything we want to do,” noting “speed kills in this game.” And quarterback Patrick Mahomes, who is in many ways the perfect quarterback to take advantage of that speed with his powerful right arm, said he can’t imagine having a faster group at his disposal.

“We’ve got guys that can roll, guys that really stretch the field,” Mahomes said. “It really makes my job a lot easier. We’re able to stretch the field vertically and horizontally. You can either take the deep pass and throw it like that or throw it out in the flat, and these guys can all take it 70 yards to the house.”

Meanwhile, in San Francisco, the Niners have quietly built a running backs group that uses speed to make up for lack of pedigree. Of the four backs on the roster, only Coleman was drafted, going in the third round in 2015.

During the 2019 season, a running back exceeded 21 mph 19 times. The 49ers accounted for four of those plays, most in the NFL (the Chiefs’ Damien Williams also made the list).

Pound for pound, Breida might actually be the fastest, which is why he has gotten some heat from Chiefs fans for also answering to the nickname “Cheetah” (rhymes with Breida). Of all the players in this game, Breida holds the record for fastest recorded speed with the ball in his hands, reaching 22.3 mph on an 83-yard touchdown run against Cleveland in Week 5.

Of course, his teammates are also speedy. Mostert averaged 11.33 mph when crossing the line of scrimmage this season, the fastest among all running backs, with Breida third (10.9 mph) and Coleman eighth (10.46 mph).

“Speed, you can’t really match it,” Mostert said. “It’s hard to match speed, especially with a defense that necessarily doesn’t have good speed on the perimeter. You can definitely exploit and take advantage of those opportunities, and I think we’ve done a great job this year of doing that.”

Chiefs defensive coordinator Steve Spagnuolo is tasked with slowing the Niners down.

In a Super Bowl that will be played with the fast-forward button permanently pressed, whichever team first locates the pause button figures to have the advantage.

Jos Buttler ‘frustrated’ but understanding as England grapple with scheduling dilemmas
All-Star MVP Tkachuk’s 5 points powers Panthers
UFC trans-Tasman Power Rankings: Who makes the top 10 in Oceania?
The Bulls enter the NBA trade deadline at a crossroads
FICA report: Chance for women to earn a living from international cricket up by 75% from 2020