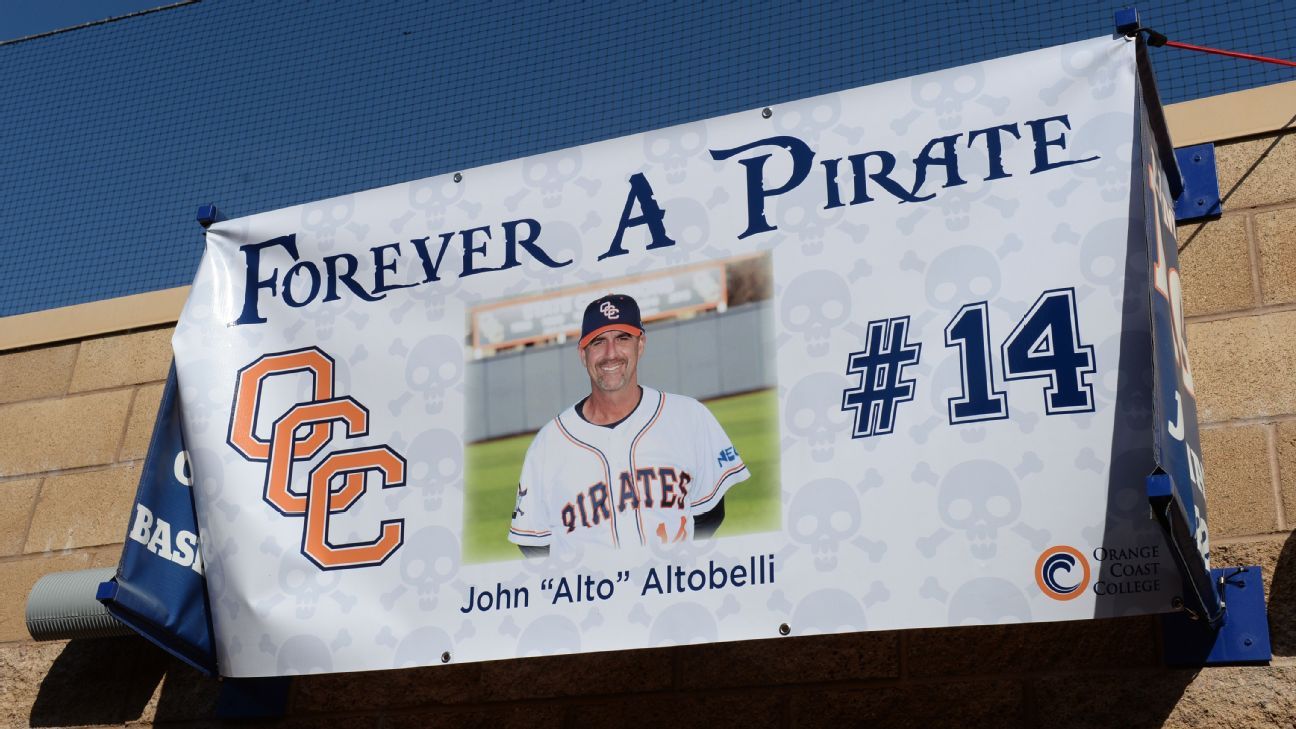 COSTA MESA, Calif. — Nate Johnson spent the last seven years as an assistant baseball coach at Orange Coast College, working underneath the legendary John Altobelli. He was promoted to associate head coach before this season began, which put Johnson in line to take over when Altobelli retired — which Altobelli continued to say would happen in three to four years. On Tuesday afternoon, roughly 50 hours after finding out Altobelli had died in the helicopter crash that also killed Kobe Bryant, Johnson was suddenly managing what will probably be the most difficult game of his life.

He kept a seat open next to him, to honor Altobelli and, perhaps, to provide himself some comfort.

“You’re sitting there and you’re making all these decisions that the man who you looked up to, who mentored you, was making the last seven years,” Johnson said. “It won’t hit me for a while. Maybe it’ll hit me tonight, maybe it’ll hit me during the game tomorrow, or Saturday. Whenever it is, it’s going to hit me that, ‘Wow, I am this person now. I’m running this team.'”

During almost every half-inning, Johnson jogged down the right-field line, found one of Altobelli’s daughters, Lexi, and gave her a hug. Lexi, a high-school junior, didn’t just lose her father in Sunday’s accident. She lost her mother, Keri, and her 13-year-old sister, Alyssa, who was on her way to play alongside Bryant’s daughter, Gianna, in a club basketball game at the Mamba Sports Academy in northern California. Lexi spent most of the game alongside her brother, J.J., a scout for the Boston Red Sox.

After Tuesday’s game was over — it was postponed in the ninth inning, with Orange Coast trailing Southwestern College by a run, because it got too dark to play in a stadium with no lights — Johnson gave Lexi another hug and followed it with a question.

“Are you OK with hugs from the rest of the guys?”

And so the players formed a line, approached Lexi and J.J., and shared their love for two siblings whose grief seemed unimaginable.

“When you look into their eyes and you see a piece of Alto there, in the flesh, it hits you a little bit,” OCC pitcher Brenden Argomaniz said.

“It was very heartbreaking because we only got a little bit of it,” utility player Nolan Funke said. “He was just our coach; he wasn’t our father. Even though we all felt like he was, we didn’t experience that bond that they did. Just seeing them out there, it really put it into a different light.”

Altobelli won more than 700 games and four state championships in 27 years for the Orange Coast Pirates. He took it upon himself to raise roughly $3 million and significantly upgrade the school’s baseball facilities. And along the way, he touched countless lives with his unique ability to push players while also letting them know he cared.

“He was the program,” Travis Clutter, a Huntington Beach resident who played for Altobelli in the mid-1990s, said. “He meant a lot to a ton of kids. Kids are vulnerable when they get here because they’re either really good at baseball and can’t get to the school they want, or they’re not good enough for baseball. This was the most pivotal time in my life, and he was like the stabilizing adult in my life. That’s more important than baseball.”

Clutter was among the 300 players and coaches who gathered at the complex on Sunday afternoon to grieve Altobelli’s sudden passing. The current players, many of them coming off a state title and a program-record 39 victories in 2019, decided then to honor the schedule without interruption, which meant practicing on Monday and opening the season on Tuesday.

By the time they arrived for Tuesday’s game, a memorial had sprouted at the entrance of the stadium, filled with flowers and candles and pictures. Altobelli’s number, 14, made up a large orange banner in the left-field corner and several-dozen T-shirts sprinkled throughout the stands. Johnson, athletic director Jason Kehler and Tony Altobelli, John’s brother and OCC’s sports information director, gave speeches to a crowd that ballooned to an estimated 2,000 people.

Among the spectators was New York Yankees ace Gerrit Cole, who attended high school only 15 miles away and made a surprise appearance in the Pirates’ dugout. Also in attendance was John’s father, Jim, who has been attending his son’s games since his first season in 1993.

“A lot of emotional ups and downs,” Jim said of these last few days. “It’s very difficult. You know, kids are not supposed to die before I do. And that’s something that I’ve heard for years and realize how tough that is. But in learning through all this, I’ve learned, ‘Don’t take tomorrow for granted.’ You don’t know if you’ll have a tomorrow. And that’s a perfect example of that.”

The Pirates fell behind by four runs in the top of the third inning, and Johnson knew they were trying too hard. He knew they wanted it too badly. The score was 7-1 heading into the bottom of the sixth when Johnson brought the players together and reminded them to breathe. He saw a more relaxed, carefree group thereafter. The Pirates immediately scored four runs to cut into the deficit, then added another in the seventh, making it only a one-run difference before the sun faded.

The game will resume with two on and none out in the top of the ninth on Feb. 18.

Johnson swears his team will walk off with a win.

“There was no quit tonight,” he said. “Most teams, they’re not going to come back from down six like we did today and make it a game with what we had to deal with these last few days. Honestly, any result would’ve been a win. Just showing up today was a win.”