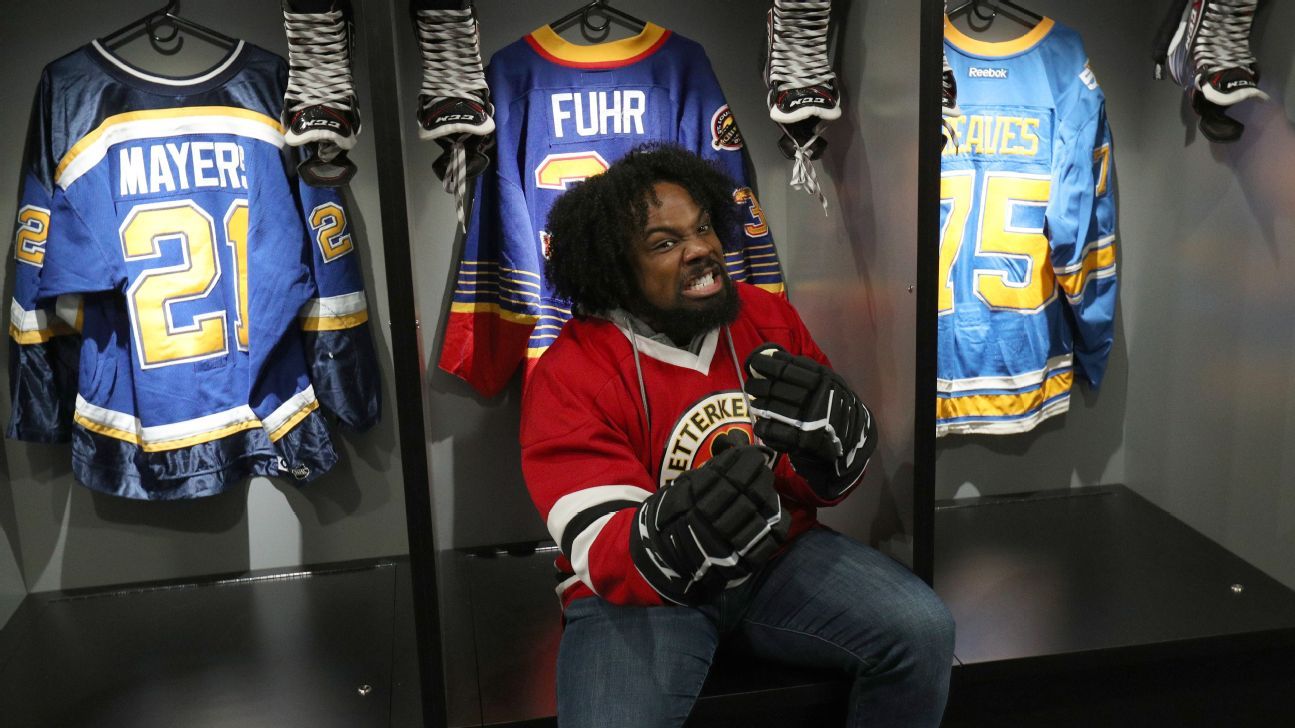 ST. LOUIS — When an Achilles tendon injury last October put WWE star Xavier Woods out of action, he had one request about his downtime.

“I told WWE when I got hurt that I’d do anything hockey. Please dear lord, help me go to hockey stuff,” he said.

Three weeks ago, the WWE came to Woods with a proposal: As a part of NHL All-Star Weekend in St. Louis, EA Sports was holding its “Chel Gaming Challenge,” where players and celebrities and pro gamers battled on NHL 20. Woods is a gamer, with close to 43,000 followers on Twitch.

“I said, ‘Absolutely. I’ve been playing! I’ll do well!'” said Woods, whose real name is Austin Watson — not to be confused with the Nashville Predators forward of the same name.

So there was Woods, teaming up with Gaming Hall of Famer Johnathan ‘Fatal1ty’ Wendel and then celebrating on stage with NHL players like Jack Eichel of the Buffalo Sabres and Matthew Tkachuk of the Calgary Flames — while wearing a hockey jersey from the Canadian comedy “Letterkenny.”

His enthusiasm was infectious, which should come as no surprise to fans of his YouTube videos, or of his Twitch channel where he streams as Austin Creed, or of his role as the trombone-playing founder of sensational WWE faction The New Day — the pastel-colored, unicorn-obsessed, pancake-tossing tag team with Big E and Kofi Kingston.

ESPN caught up with Woods, a Tampa Bay Lightning fan, at the Chel Gaming Challenge to talk about his surreal NHL All-Star experience, his adventures in video games and the crossover between hockey and wrestling fans.

ESPN: You met Wayne Gretzky at the NHL All-Star Skills Competition. What was that like?

WOODS: When he came up on the big screen, when he was walking out on the ice, I looked up from what I was eating and in my brain I was like, ‘Oh my god, I think that’s Wayne Gretzky.’ And then they announced it and I was like, ‘Oh my god, it is Wayne Gretzky.’ Like, being in the same building as him was amazing. The fact that he was in the suite, and we got to go meet him and take pictures and talk to him and hear him say he was friends with a bunch of pro wrestlers back in the day was so cool. I’m semi-linked to Wayne Gretzky.

I’ve very new to hockey. I’m trying to learn more about hockey. But I know who Wayne Gretzky is because I was big into cartoons when I was younger, and that was my first exposure to who Wayne Gretzky is: “ProStars.” Incredible. And then the video games and then the internet, in seeing so much stuff with Gretzky … to see him in person is weird.

ESPN: It’s like somebody coming down off of Mount Rushmore.

WOODS: Exactly. And he’s taking time to speak to me? Growing up, I wasn’t around hockey. I grew up in California and then Atlanta. There just wasn’t hockey. I knew about it. I just didn’t know what it was. So “ProStars” wasn’t just my first introduction to Gretzky, but to hockey.

ESPN: What was your first NHL game?

WOODS: An Atlanta Thrashers game. Years ago. My favorite memory about it was [between periods] they had college kids playing hockey in sumo suits. Literally one of the funniest things I’ve ever seen in my life. To the point that next year, at this event, I’ve already pitched that we do a weird celebrity 3-on-3 in sumo suits. God, I would die, it’d be so much fun.

ESPN: Were video games an entry point into hockey for you?

WOODS: Actually, what got me into hockey was when I was hanging out with a friend and he turned on a game and it was during the playoffs. What I saw on the screen were two teams that were tied, with 10 seconds left. I was like, ‘This is the last game of this series, right?’ And he was like, ‘No, this is the middle of this game. And this is Game 2 of the Final.’ And I was like, ‘But these guys are murdering each other. Why have I not been watching this?’ And they’re like, ‘That’s hockey.’

Since then, I’ve been playing Chel a little bit, and that’s helped me. Video games are my perfect avenue to get into it.

ESPN: I always found your background in gaming to be so interesting. What was the inspiration for “Up Up Down Down?” How did that get started?

WOODS: We travel to different cities every day. So what I try to do is go to different arcade bars around the country, because the idea of bringing back arcades is great to me. We’re all old enough now, so of course we want to drink when we play video games. So I go to these all over the world. I thought it would be cool to have a Travel Channel-esque show that showed off all these locations. WWE decided to pass. But there was interest in talent getting YouTube channels, so we decided to do a gaming channel, and see if [WWE would] bite. It took a year to get the OK, but we have the channel and it’s five years deep and we’re happy it’s still progressing.

ESPN: Do you have a favorite bar?

WOODS: It’s a chain, but I would say Up Down. They’re incredible. So well done. The one here in St. Louis is the only two-story one, and it’s ergonomically correct. Lots of them, you can’t move around. There are good games, but you can’t get to the Street Fighter machine because it’s too crowded.

ESPN: Has your online presence, including playing games on Twitch, expanded your fan base or are the same people who dug you as a wrestler consuming your other content?

WOODS: I’m in a lucky position. I get to come to do stuff like this, and have people come up to me and say, ‘I saw your name on the list. I didn’t think I’d like you’ or, ‘I didn’t know why you were here, but by the end of it I love your energy and I’m going to follow your stuff.’

When I do stuff here, do people’s podcasts … I’ve been doing a lot of Dungeons and Dragons stuff. [Laughs] I try my best to put myself in front of new audiences that I think I vibe with, because we’re interested in the same things, whether I already know about them or I’m learning. I’ve never met an audience yet that’s like, ‘We don’t want you in our place!’ As long as I vibe with them.

When I’m done wrestling, I don’t want to be lost and not know what the next chapter is. At this point, I’m burning the candle at both ends doing wrestling and gaming stuff. Now, one end of the candle is fizzled out because I’m hurt, so I’m just burning the candle at one end. Instead of two jobs, I’m focusing on doing one, and when I’m wrestling again I’m hoping that my fans on the gaming side are like, ‘I never watched wrestling, but I liked him at the Chel Challenge. So let me watch him wrestle when he’s back.’ I’m creating a synergistic thing.

• The secret life of NHL dentists »
• From mascot to meme to megastar: How Gritty took over the world »
• The NHL’s love affair with hair »
• The struggle is real: Why hockey butts and jeans don’t mix »
• The definitive NHL mascot rankings »

ESPN: Is there crossover between hockey and wrestling fans?

WOODS: Oh definitely. Everybody has some tie to wrestling, either it was their grandpa taking them to matches or their stepmom being really into it. Everyone has some sort of wrestling story, and when they understand what wrestling is, they have a different appreciation for it.

Look, it’s 2020. We get it. Wrestling is what wrestling is. And then we’ll hear people saying they just watch UFC and not the ‘fake stuff.’ Well, the dragons on “Game of Thrones” are not actually dragons. And in shows that are in television, you have months or years to write a script, the actors then get those scripts. They go over their lines. They shoot the scenes 30 times. And then they make their best cuts from all of these, and produce their 12-episode shows. Our show is on 52 weeks a year. We don’t get scripts days in advance; we find out what we’re doing at like 5 p.m., and then go and perform it at 8 p.m. It could change in the ring. It can change during a live shot, in front of a live audience. We have to tell a story through words and through physicality as well.

Once people get that, they realize, ‘Oh, this is difficult. I should really appreciate it.’

ESPN: Finally, was there a moment when you realized that you, Kofi and Big E were getting over as The New Day?

WOODS: It’s when people started chanting, ‘New Day Sucks.’ I was told by my first trainer that if people can make fun of you, and other people know they’re making fun of you, then you’re good.