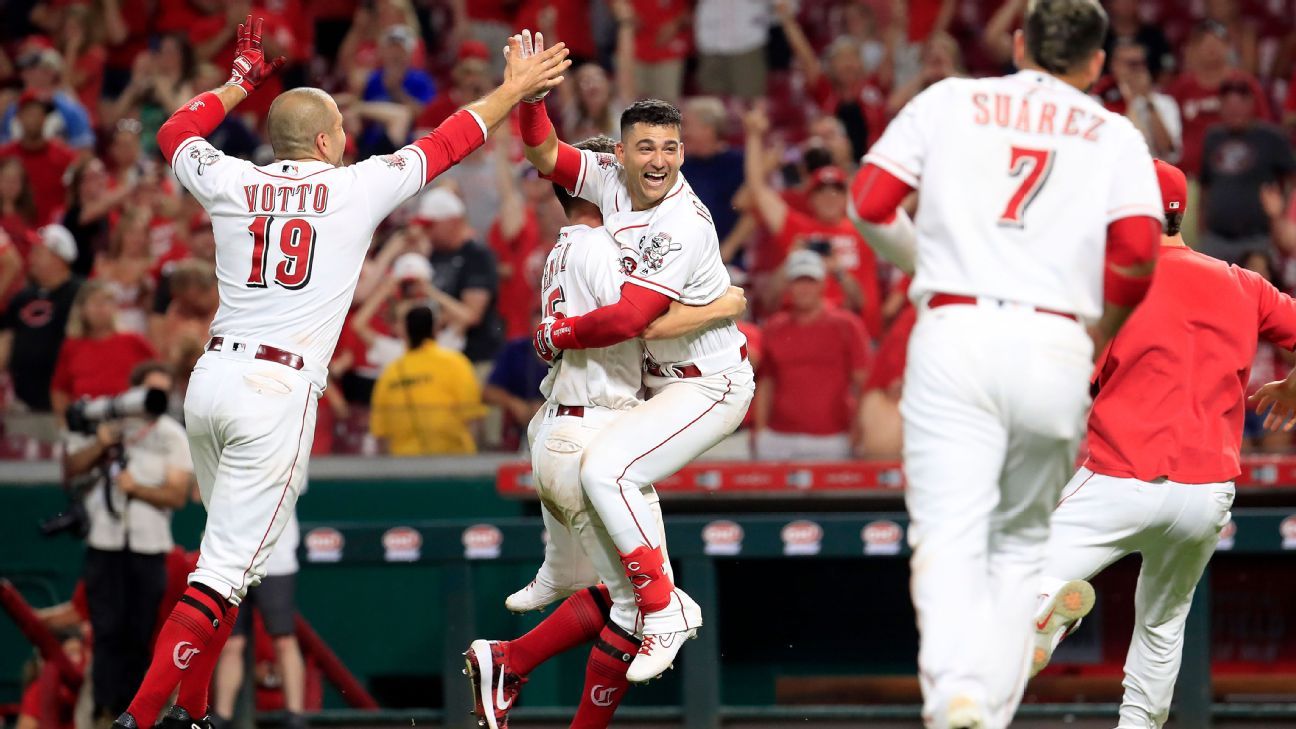 That’s why I was skeptical when Reds owner Bob Castellini said at the beginning of the offseason that the team was ready pursue some free agents and spend some money. It sounded like hollow words from the owner of a franchise that has never gone down that road — the Reds did extend the contract of homegrown star Joey Votto back in 2012 before he reached free agency, but their biggest free-agent signing of the decade was the $30.25 million they gave Aroldis Chapman.

Castellini has lived up to his words. The Reds have agreed to a four-year, $64 million deal for outfielder Nicholas Castellanos, on top of already signing Mike Moustakas ($64 million), outfielder Shogo Akiyama from Japan ($21 million) and pitcher Wade Miley ($15 million). Castellanos does have opt-out clauses after 2020 and 2021, but this is potentially $164 million invested in free agents, more than Cincinnati had spent the entire previous decade.

The Reds clearly see the door ajar in a winnable division and embarked on — for them — this Saks Fifth Avenue spending spree. Give them credit for making a big push at what appears to be an opportune time. Last spring, I remember talking to Chaim Bloom, then with the Rays and now the Red Sox general manager. I mentioned the unfortunate timing Tampa Bay faced. The Rays had won 90 games in 2018 but missed the playoffs as the Red Sox won the AL East with 108 wins. The Rays looked strong heading into 2019 — sure enough, they would win 97 games, good enough for a wild card — but were facing the Red Sox and a loaded Yankees team. Bloom said that a club can’t time its window of contention — there is too much you can’t predict with your franchise, let alone your division rivals.

The Reds, however, are trying to time things just right, even though they’re coming off six consecutive losing seasons. It’s safe to say that there is no 2018 Red Sox or 2019 Yankees in the NL Central — and the rest of this division has been pretty quiet this offseason:

Roundtable: What Donaldson brings to the Twins

• The Chicago Cubs, hamstrung by a self-imposed restriction on their payroll, have done nothing of note coming off a disappointing 84-win season and have lost Cole Hamels to the Braves and manager Joe Maddon to the Angels.

• The Pittsburgh Pirates finished last and just traded away one of their best players for two prospects.

The Reds do have 16 games to make up on the Cardinals in the win column, but factor in a full season from Trevor Bauer, an improved Nick Senzel in his second season and better late-game results from the bullpen and it’s not ridiculous to consider the Reds the division favorite. Or at least a strong contender.

On the other hand, there is a general rule about the offseason to keep in your back pocket: The team that wins the offseason doesn’t always win the regular season. We can go back to last year, when the Phillies signed Bryce Harper and Andrew McCutchen and traded for J.T. Realmuto and Jean Segura. Look at all that star power! The Phillies improved by one win.

Indeed, the depth charts and projections at FanGraphs are not overly optimistic about the Reds, seeing them only about three wins better than the Pirates (although for some reason the playing time projections include Castellanos but not Akiyama, not that Akiyama’s projections would change things all that much). On the computer screen, FanGraphs likes the Cubs:

Of course, seven wins is well within not just the margin of error of any forecasting system, but within the range of randomness and luck of any baseball season. The NL Central is wide open. The projections do point to the issue here: Exactly how good is this offense? The Reds finished 12th in the NL in runs last year. Heck, the Pirates were 11th and scored 57 more runs. Moustakas is more of a big name than a big star, as he hits home runs but has just a .319 OBP over the past three seasons. Castellanos bashed doubles all over the field in 2019 — 58 of them — but he’s also not a high OBP guy with a .337 mark last year and .337 over the past three years. To be fair, those two are clear offensive upgrades over what the Reds had last year at second base and in the outfield corners (for most of the season), so the lineup looks better.

The Reds won’t get much offense at catcher or shortstop, however, and then you have to consider Votto. Coming off a .261/.357/.411 season that made him a below-average hitter, he’s a little bit like late-career Todd Helton on those pretty good 2009-10 Rockies teams. That’s nowhere near the player he was, but he still gives you some OBP, takes good at-bats and gets respect, and the Reds don’t need him to hit in the middle of the lineup. Given his struggles against lefties in 2019 (one home run in 152 at-bats), the Reds might even considering platooning him. Still, if he’s below average, that would be subpar production from three positions, and you don’t really know what you might get from Senzel (.315 OBP, 89 OPS+ as a rookie), Akiyama or Aristides Aquino (great in August, terrible in September).

The Reds scored 113 fewer runs than the Cubs last year — and that’s before you even get to some of the potential defensive issues here. Moustakas will be out of position at second base, and while, yes, the shift can help cover for some of that, every team plays the shift now and Moustakas in the shift is not the same as Kolten Wong in the shift. Castellanos was better in the outfield last year but is still a below-average defender. Galvis is average at best at shortstop. Senzel is a converted infielder learning to play center field. Akiyama turns 32 in April, an age when most center fielders have to move off the position.

FanGraphs projects Reds position players with 12.8 WAR — better than just the Tigers, Marlins, Rangers and Orioles. Ouch. That feels a little low. I mean, I don’t think I’m taking the Mariners, Pirates, Royals or Giants lineups over Cincinnati’s. But those are the numbers. The pitching staff, however, projects seventh best in the majors, with a strong 1-2-3 in Trevor Bauer, Luis Castillo and Sonny Gray, with rotation depth in Miley, Anthony DeSclafani and Tyler Mahle (former Rays prospect Jose DeLeon is floating around here as well if he can stay healthy). That feels like a rotation with which you can win a mediocre division.

And the offseason isn’t over. The Reds have a glut of outfielders now, including Phil Ervin, who crushed lefties in 2019 (.349/.411/.628). That has led to speculation that another move might be on the horizon — such as including Senzel in a trade for Francisco Lindor. That’s a nice thought, but given Senzel’s rookie numbers and injury history, I’m not sure he’s enough to be the centerpiece in a Lindor trade.

It’s been a fun offseason for Reds fans and it’s always a positive sign for the game when a small-market team actually opens up the checkbook. We’ll have plenty of time for predictions, and let’s see how the rest of the season plays out — Nolan Arenado to the Cardinals? Kris Bryant traded away? — but right now the NL Central looks like a four-team fight.

C’s win as controversial end leaves Lakers furious
Big 12 football schedule release: Every game for every team in 2023
Giannis eclipses 50 for third time in 11 games
Trade grades: Horvat fills a need for the Islanders … but at a high cost
Cameron Green makes ‘significant’ progress in injury recovery ahead of Nagpur Test