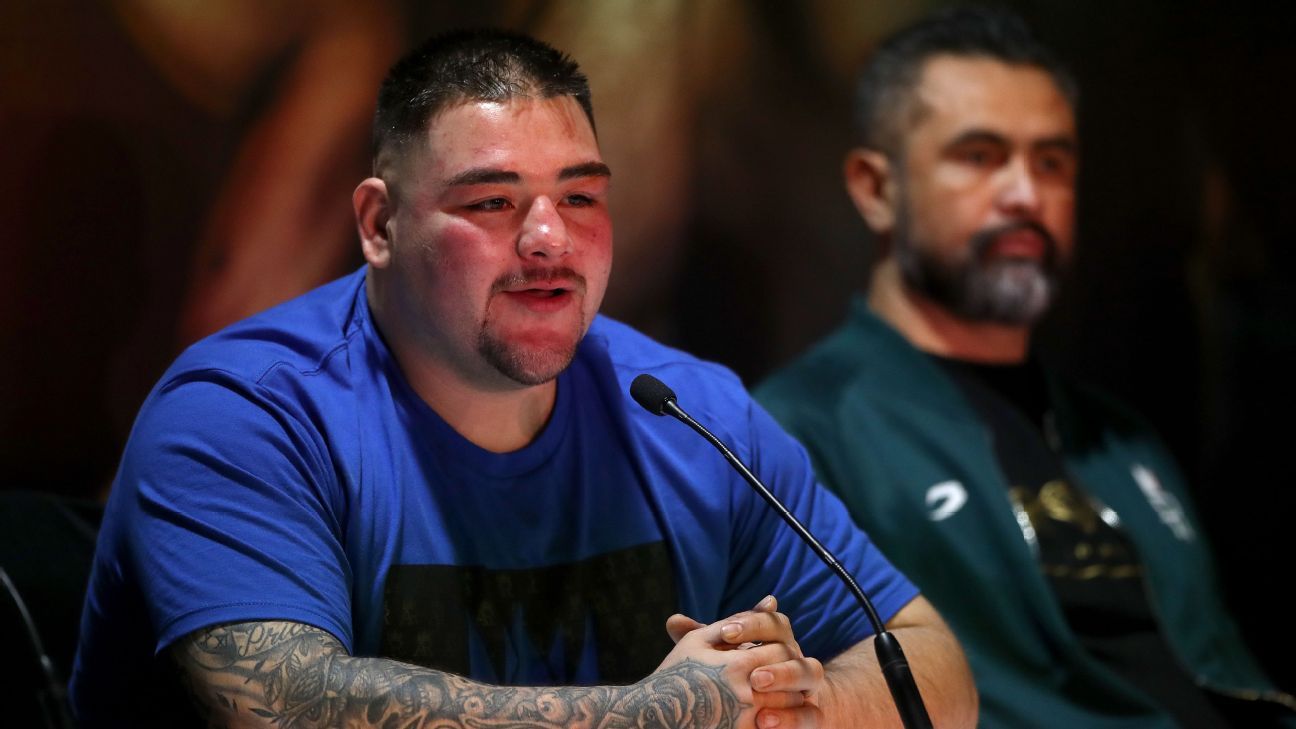 On Jan. 23, trainer Manny Robles announced that he was no longer training Andy Ruiz Jr. After defeating Anthony Joshua back in June to capture the WBA, IBF and WBO heavyweight titles, Ruiz was the feel-good story of 2019. But then Ruiz showed up to the rematch in Saudi Arabia out of shape and lost to Joshua in a lopsided affair.

Ruiz’s stock tumbled. From a public perception he lost much more than the titles. Somebody had to take the blame, and with that, Ruiz (33-2, 22 KOs) is now in the market for a new trainer.

So who would be a realistic and ideal choice to lead the 30-year-old native of Imperial, California, moving forward? Let’s take a look at some options:

Overview: Best known for having worked with Mike Tyson as an amateur in the Catskills in New York, Atlas led Michael Moorer to the heavyweight title. More recently, he trained Timothy Bradley Jr. during the last stages of his career, as well as recently dethroned WBC light heavyweight titlist Oleksandr Gvozdyk. Atlas, who was mentored by the legendary boxing manager and trainer Cus D’Amato, is one of the most fascinating figures in all of boxing. His services are often in demand, but it’s rare that he makes the commitment to train a fighter.

Why it makes sense: If Ruiz needs some discipline in his life, Atlas is the ultimate disciplinarian. He makes drill sergeants look soft. That’s why, out of all the listed options, this is by far the most fascinating name. The representatives for Ruiz reached out to Atlas back in December and plan on flying out to the East Coast to meet with him in February. You get the sense that Ruiz, or his handlers, believe that they need someone who is a tough, authoritarian figure — one who won’t bend to his whims. Atlas is the classic “my way or the highway” leader, and he won’t hesitate to tell Ruiz when he’s not happy with his commitment or effort. Talk to boxers who have been under his guidance, and they’ll tell you that it isn’t just boxing Atlas teaches, but hard life lessons. Beyond all that, Atlas is also a sound tactician — it isn’t just fire and brimstone with him.

Why it may not work: The very thing that Ruiz may think that he needs, he may not be able to handle. Yes, in theory what Atlas provides in terms of structure and the toughest of love might be something that Ruiz wants, but also something suffocating. Ruiz has a very laid-back personality — to the point of being downright casual and disinterested at times, which is in direct contrast to Atlas, who demands a certain type of adherence to his rules. Atlas will tell you himself that he isn’t for everybody. Should this union actually come to fruition, Atlas will most likely insist on Ruiz coming to the East Coast — and he’d have to do so by himself, leaving his burgeoning entourage behind. How he would handle being 3,000 miles away from his comfort zone remains to be seen. Regardless, if this happens — even as a trial run — this kind of odd couple must be filmed for a reality show.

Overview: The 2019 Boxing Writers Association of America Trainer of the Year is best known for developing Canelo Alvarez into one of the premier fighters on the planet. Under his guidance, Alvarez has honed his skills and become one of the best pound-for-pound boxers in the world. And rightfully so. Reynoso also currently works with former WBO featherweight titleholder Oscar Valdez, lightweight sensation Ryan Garcia, junior featherweight contender Luis Nery, and WBC flyweight belt-holder Julio Cesar Martinez. He recently added Cuban heavyweight Frank Sanchez to his stable of fighters.

Why it makes sense: Reynoso’s recent track record speaks for itself, and he is a stickler for details and drilling the nuances of the game into his boxers. Also, he’s based in San Diego, and there is a good possibility that Ruiz will want to stay close to home. They say that iron sharpens iron, and perhaps the presence and professionalism of Alvarez — who is as committed to the craft as any fighter today — will provide a steadying influence on Ruiz. Reynoso is clearly one of the elite trainers in boxing.

Why it may not work: Talk to anyone who has crossed paths with Reynoso and they will tell you that he simply won’t put up with anyone that isn’t serious about the sport. Also, since Reynoso already has a marquee lineup of boxers, perhaps he doesn’t really have enough time to fully devote himself to Ruiz, who isn’t always guaranteed to show up to the gym. The bottom line is that Reynoso doesn’t really need Ruiz from a professional or personal perspective. He simply may not want the headache of dealing with the mercurial heavyweight.

Overview: Roach has been named trainer of the year five times by the BWAA and is no stranger to preparing marquee boxers for battle. He’s best known for his signature client, Manny Pacquiao, but he has also trained Miguel Cotto, James Toney, Marlon Starling, Johnny Tapia, Amir Khan, Jose Ramirez, Michael Moorer, Oscar De La Hoya and Bernard Hopkins during various points of their careers. There’s a reason he’s in the International Boxing Hall of Fame.

Why it makes sense: Ruiz is very familiar with Wild Card Boxing Club, as years ago he trained there as a young professional. This gym is located in Hollywood, California, and Ruiz may feel very comfortable in his old haunts. Roach has shown in the past that he can get along with boxers that are rather temperamental or a tad undisciplined, and maybe — for better or worse — this is the type of coach that Ruiz needs. Based on his résumé, Roach is the kind of trainer that garners respect.

Why it may not work: The great thing about Roach is his ability to soothe egos and be flexible with his boxers. But you wonder if maybe Ruiz needs someone tougher in his corner. In the past, Roach has exhibited the patience of Job and has gotten burned recently by the perennially disappointing Julio Cesar Chavez Jr. and Nery. Perhaps Ruiz needs to get out of his comfort zone and have a bit of a shock to his system, and Wild Card might be just a bit too comfortable for his own good.

Overview: There’s no denying the track record of Goossen, who basically developed the raw Ruelas brothers (Gabriel and Rafael) into world champions, sharpened the talented Michael Nunn and rescued the career of Joel Casamayor as it was floundering early on. Currently Goossen works with welterweight contender Sergey Lipinets.

Why it makes sense: Goossen is boxing’s great communicator. He’s as good a corner jockey as you will find during the heat of battle. He can go to the whip if needed, or coax a fighter across the finish line. Nobody can motivate the way he can. This past summer he took the reins of another Mexican-American heavyweight, Chris Arreola, as Arreola prepared for his 12-round bout with Adam Kownacki. While Arreola came up short in a unanimous decision loss, he put on a very respectable effort. Goossen’s upbeat personality and enthusiasm could give Ruiz the motivation that has often been lacking in his career.

Why it may not work: Goossen is a trainer who believes in an abundance of floor work. His boxers will go upward of over 30 rounds some days as they work various drills in and out of the ring. He is a staunch believer that this is the foundation of any conditioning program for a boxer. You wonder if Ruiz can actually handle that kind of daily regimen. Goossen is someone who likes his fighters hitting the heavy bag and the punch cushion; you rarely see him ever working the pads with his boxers. This might be problematic, as Ruiz has stated that one of his issues with Abel Sanchez (who was his trainer for his close defeat to Joseph Parker in 2016) didn’t work the mitts with him, and that it affected his sharpness going into that bout.