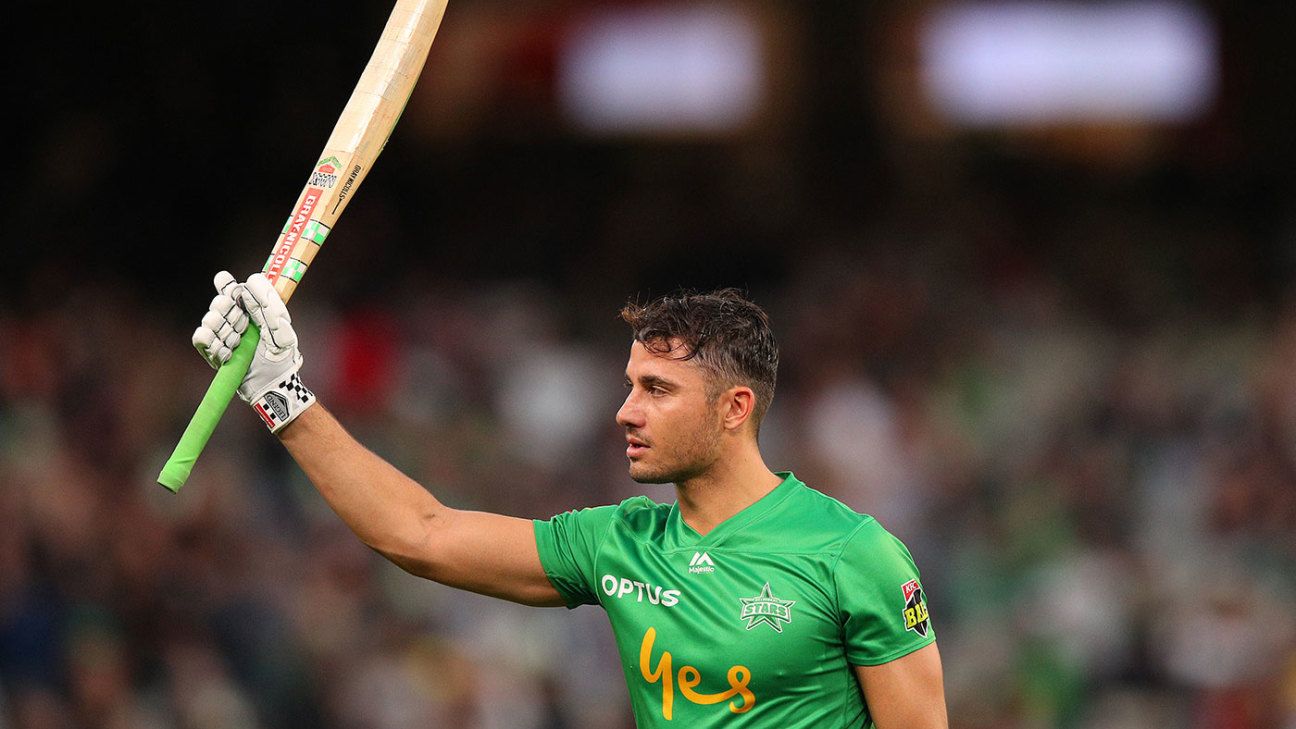 Marcus Stoinis believes he can still break into Australia’s T20 World Cup team as an allrounder despite being recast as a non-bowling opening batsman for the Melbourne Stars in the Big Bash League, a role in which he is all but assured of finishing as the tournament’s top scorer this season.

In a telling departure from the positions he has occupied for Australia, Stoinis has been used at the top of the order by the Stars, where he gets the advantage of extra time to start his innings, while also not bowling at all.

The result has been a tally of 607 runs from 14 regular season games at an average of 60.70 and a strike rate of 134.29, underlining the wisdom of placing Stoinis at the top, even though he is unlikely to contend for a similar spot for Australia where Aaron Finch and David Warner are locked in as openers.

Asked whether he could command an allrounder’s place in the national T20 squad despite the change in role for the Stars, Stoinis noted that the likes of Jon Wells had been adept at the middle order job, but argued he still had the IPL with the Delhi Capitals in which to show his allround abilities.

“I do understand that definitely they’re very different and you’ve had guys like Jon Wells – how well’s he done – I mean, he’s been a good player for a long time, I’ve known him from Western Australia. So I’m really happy for him,” Stoinis said. “But then also, for me I’m not too worried because I’ve batted everywhere my whole career.

“I’ll go to the IPL in two months and most likely I’ll be batting five or six. So to me, I see it as I’m adaptable, I’m trying to do everything I can in the game and if the selectors see it as ‘you’re an opening batsman’ or whatever, that’s up to them.

“You’ve got to be careful with what you feel you deserve and I think I’ve probably been guilty of having expectations that you think other people should reward you for certain things. So I’m very aware, I’m just enjoying what I’m doing. I understand that the national selectors wanted me to go back to domestic cricket, or Big Bash cricket and dominate, so hopefully I’ve sent that message.”

Numerous opening batsman have occupied the other spot opposite Stoinis for the Stars, and the club still looks to be trying to find their best combination despite qualifying at the top of the table and earning a home final against the Sydney Sixers at the MCG on Friday night.

“We’ve been adaptable and that’s what happens in this competition – whether it’s Australian selection or injuries, that sort of stuff,” Stoinis said. “But the main thing I’m after, I just want the person at the non-striker’s end to feel no pressure and just have fun and we’re there to express ourselves, we’re playing at the MCG, we’ve got great opportunities.

“I was talking to Seb [Gotch] before the last game and I was messaging him asking him if there’s anything he needs from me and he said ‘no, just clap at the other end when I hit a boundary’.”

As for the Stars’ trailing off in performance after securing top spot – they lost their last three games, including a heavy defeat to the lowly Brisbane Heat in the final fixture – Stoinis said the club had enjoyed the chance to end the treadmill of matches and refocus for the finals. A team outing to the Australian Open tennis on Sunday had afforded the chance to let off some steam.

“I’ve heard a few people say maybe we got complacent and that sort of stuff but also there’s been a few opportunities to, with injury and that sort of stuff, to give people a chance and we’re trying to find this opening partnership as well,” Stoinis said. “We’ve had an overseas player left, so there’s moving parts. I don’t think it was complacency, it’s more just the fact you’ve got to be adaptable and we’re heading now to the pointy end and we’ve got pretty much our full team available.

“I think there’s still some positives. Petey Handscomb’s played well the last couple of games, we’ve had a few injuries, Hilton Cartwright’s been really good for us but then he’s got a crack in his finger…it’s just going to give opportunities to other people.

“I guess in big games you either get a bit nervous and you try and stay away from failure or you go for it and you look for success – so that’s what we’ll be looking for. I’ll be charging towards success, hopefully.”

One key addition for the Stars will be the return of the Pakistan paceman Haris Rauf from international duty, which will provide something of a counterbalance to the loss off Sandeep Lamichhane’s artful wrist spin.

“We’ve been bowling about 18 overs of spin a game, so we’ll still hopefully have enough spinners to cover all those sort of bases,” Stoinis said. “We’ve had Hinchy [Clint Hinchliffe] who’s come into his own and done really well for us, we’ve obviously got Zamps [Adam Zampa] coming back, Maxy’s been bowling unbelievably well and then the Mad dog, [Nic Maddinson] has been chipping in with a few wickets and some catches. So I think we’ve got a lot of spin covered and now we’ve got big Raufy to come back in and maybe I’ll bowl an over.”