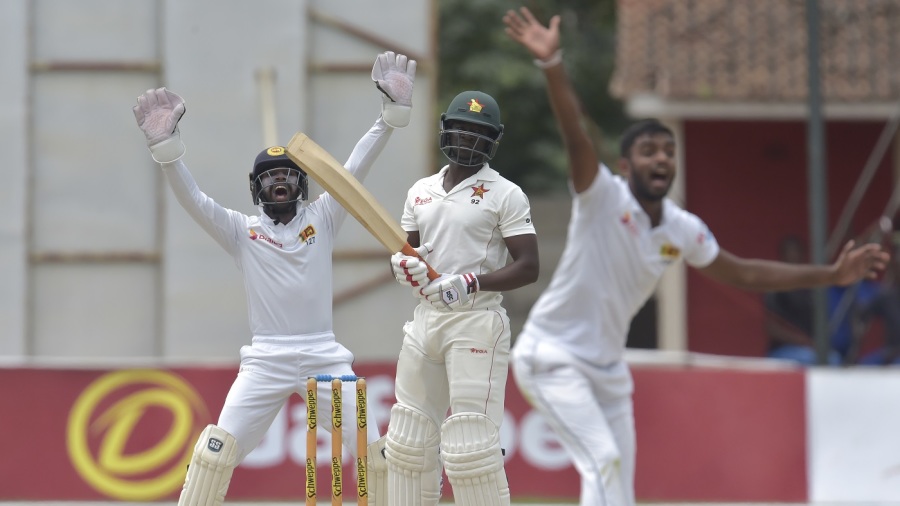 Zimbabwe found it slow going on the second morning as Sri Lanka managed to remove the four remaining batsmen for just 54 runs. Lasith Embuldeniya, who had picked up just the solitary wicket on the first day, was the biggest beneficiary of Zimbabwe’s more reserved approach, adding three more scalps to finish with figures of 4 for 182. Dhananjaya de Silva picked up the other, the crucial one of Tinotenda Mutombodzi, to end with 3 for 71.

At lunch, Sri Lanka’s opening pair had managed to see out the remaining three overs of the session with little trouble.

In hindsight, Zimbabwe may rue eschewing the aggressive attitude that had served them so well on the opening day. Mutombodzi and Regis Chakabva, in the face of yet another threatening spell from Suranga Lakmal at the start of the day, seemed content to bide their time in the search for runs.

During this period, Lakmal beat the bat on numerous occasions, with deliveries either nipping back or shaping away from a length outside off stump. The veteran seamer was unlucky not to add to his wicket tally, but his spell served to set the tone for a subdued first hour in which Zimbabwe added just 26 runs.

The ill-advised nature of Zimbabwe’s approach was compounded when Embuldeniya spun one past Chakabva’s tentative forward defence, getting a faint edge through to the wicketkeeper.

Following the drinks break, the Zimbabwean batsmen, possibly following instructions from the dressing room, showed more intent, taking quick singles and punishing the deliveries that were either too short or overpitched.

While the Zimbabwe batsmen never really seemed in too much discomfort, runs were still not as forthcoming. A 24-run stand between Mutombodzi and Donald Tiripano lasted over an hour before the former missed a sweep against Dhananjaya and was trapped lbw.

The final two wickets didn’t last much longer as Embuldeniya wiped out the tail. Tiripano was the first to go, holing out at mid-off to one pitched up. Victor Nyauchi was then caught splendidly at slip by Dhananjaya off Embuldeniya.