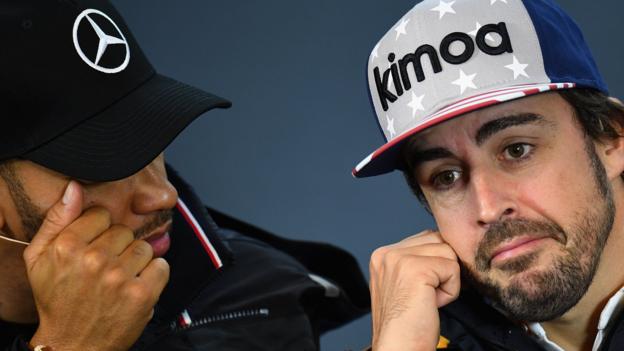 Lewis Hamilton has “raised his level” in the last two seasons, but still has weaknesses others are not exploiting, according to Fernando Alonso.

“He still has some weak points that have not been stressed yet – no-one is pressing that button, that weakness.”

The two-time F1 champion said that Hamilton’s superiority over his Mercedes team-mate Valtteri Bottas was obvious from the weekends when the car was not competitive.

He added that Hamilton had not been tested under moments of extreme pressure in recent seasons.

“He’s raised the level the last couple of years, especially in 2019 when the car has not been as dominant as other seasons,” said Alonso, who tied on points with Hamilton when they were McLaren team-mates in a tumultuous 2007 season.

“If he cannot win, he’s a very close second – not 20 seconds further back, which is what happens a little bit with Valtteri.

“A weekend when the car is not as competitive, Bottas is fifth or sixth or a minute behind – but Lewis is not.

“If you study Lewis’ season, there is always a common trend. He starts the year slowly and no-one takes the benefit of that. We all get excited that it will be the year of Bottas, but it’s not.

“When you have a good package and the other guys crash and you extend your championship lead, everything seems calm.

“If you are only one point behind or 10 points behind, the stress is different. The mistakes are different and your radio communications are different. We need to see him when the pressure is on.”

This last remark can be seen as a veiled criticism of Ferrari driver Sebastian Vettel, who was Hamilton’s main title rival in 2017 and 2018 but whose campaigns were damaged by a series of driver errors.

Alonso, who lost out on the 2010 and 2012 titles to Vettel at the last race of season in agonising circumstances, does not rate the German on as high a level as he does Hamilton.

The 38-year-old, whose last four seasons in F1 were spent in an uncompetitive McLaren, has made it clear he is open to a return to F1 in 2021 if the right opportunity arises, and believes the new rules being introduced next year should close up the field.

However, his chances of finding a seat at one of the top three teams look slim – Red Bull and Ferrari have recently signed Max Verstappen and Charles Leclerc to long-term contracts and have invested in them as their main hopes for the next few seasons.

Hamilton, who turned 35 this month and is aiming to equal Michael Schumacher’s all-time record of seven world titles this year, is expected to sign a new deal to stay at Mercedes for at least another two years after the end of his current contract this season.

That leaves Renault as Alonso’s most likely option should he decide to return to F1 in a year in which he will turn 40 in the summer.

Alonso this month finished 13th on his debut at the Dakar Rally desert endurance event and is next likely to be seen in competitive action on the world stage at the Indianapolis 500.

Insiders say he is close to securing a deal to race for the Andretti team in his third attempt at the race in May.

Alonso drove for Andretti, in a McLaren-branded car, when he made an impressive debut at Indy in 2017, qualifying seventh and leading for 24 laps before retiring with an engine failure in the closing stages.

He returned to Indy last year with a new McLaren team, but the escaped turned into an embarrassment for McLaren, who admitted a series of mistakes and are entering Indycar racing with a dedicated team this year.