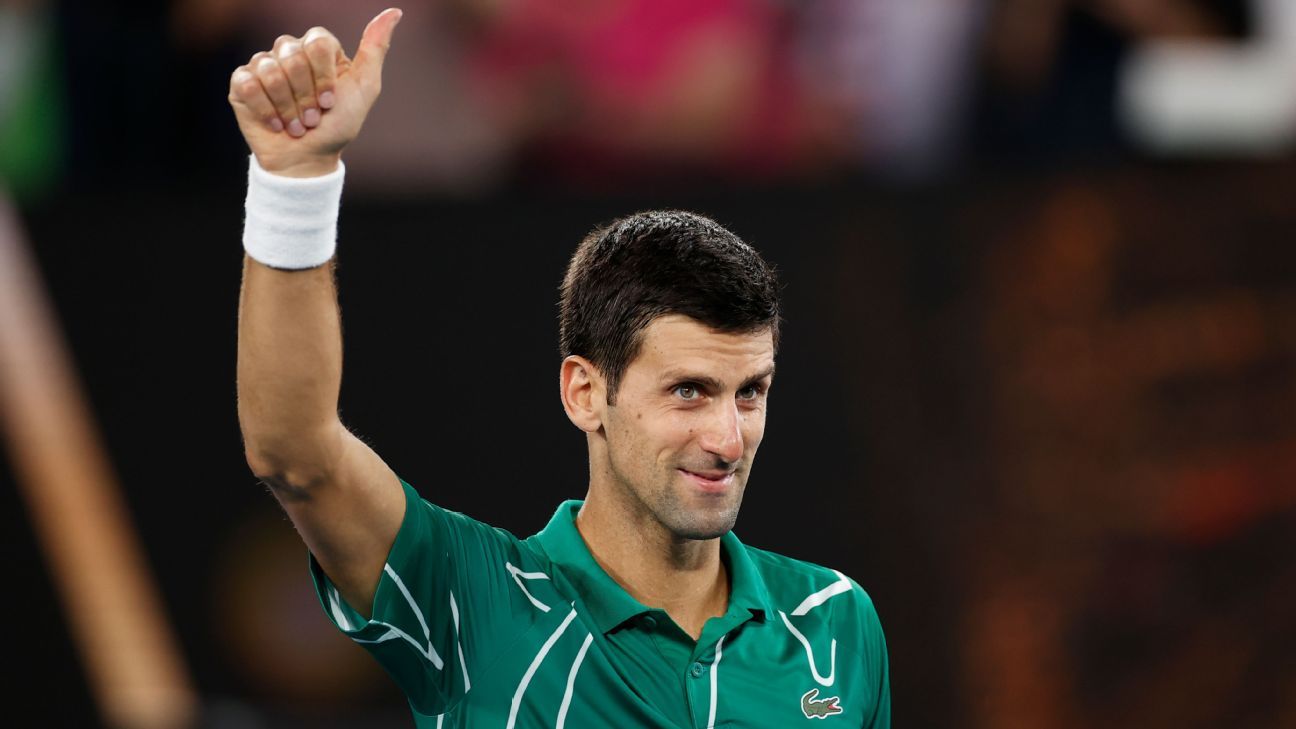 MELBOURNE, Australia — There are no pictures on the scorecard, as they say in golf, no description of how the score came about, just the result.

And after Tuesday’s action at the Australian Open, it’s a phrase that Roger Federer would probably agree with.

Whereas Novak Djokovic cruised through his quarterfinal with Milos Raonic on Tuesday evening with a 6-4, 6-3, 7-6 victory, Federer, suffering with a sore groin, somehow managed to save seven match points before escaping, Houdini-like, to beat American Tennys Sandgren, 6-3, 2-6, 2-6, 7-6, 6-3.

Djokovic was at his clinical best as he dismantled the serve of Canada’s Raonic, who had not been broken at all on his way to the quarterfinals. The Serb, chasing a record eighth Australian Open title, broke once in each of the first two sets. Even a contact lens problem, which affected him late in the third set, could not derail his serene progress to the semifinals, the 37th time he has made it this far in the four Grand Slams.

The worry for Federer — aside from the sore groin that affected his movement for long periods against Sandgren — is that Djokovic has gone on to win the title every single time he has made the semis.

“I felt great on the court,” Djokovic said. “I felt I was very focused. The first couple of sets went exactly the way I wanted them to go, one break was enough in each set. I was comfortable serving and on return, I tried to get him moving around the court. I was fortunate to get out of it in the third set and then played a great tiebreak.”

Federer survived by his fingernails against Sandgren, who couldn’t convert any of his seven match points, three at 4-5 and four more in the tiebreak. Not that Federer could remember much later, so intense had the battle been at that stage. As his body loosened up, one break for 4-2 in the final set was enough as Federer scrambled through to the semifinals in Melbourne for the 15th time in his career.

“Honestly, when they told me seven [match points], I was like, ‘What?'” Federer said. “I thought it was three. It’s such a blur at some point. Probably now in hindsight I probably served well on a couple, maybe. I don’t remember. I remember there were a few longer rallies on match points. I feel a bit bad in a way because I didn’t feel like he did anything really wrong. It’s just luck at some point. I’ve been on the other side, as well.

“These ones just sting, and they hurt. I don’t know. If you could obviously play them again, would you play them differently? But I could have blinked at the wrong time and shanked. That would have been it. I was incredibly lucky today.”

Djokovic leads Federer 26-23 and has won their past five meetings in Grand Slam events, including last year’s Wimbledon final in which Federer had two match points before losing the final-set tiebreak.

At 32, the Serb is six years younger than Federer. The carrot of trying to close the gap on the Swiss in the all-time Grand Slam list (Djokovic has 16 to Federer’s 20 and the 19 of Rafael Nadal) should help inspire him. For Federer, the big question is what kind of shape he will be in after needing a medical timeout and then a trainer.

“Two good nights of sleep, doctors, physios, hopefully we’ll find out that it’s actually nothing bad, that it was just the groin that went really tight from playing a lot, who knows what, from nerves, I don’t know,” Federer said. “I’m hopeful. We’ll find out tonight, tomorrow. The next day we’ll see how it goes.”

With two days to go before their semifinal, at least he has time. Djokovic, who watched some of Federer’s match as he was preparing for his own, knows that if Federer makes it onto court, he will be there because he thinks he can win.

“Obviously tremendous respect for Roger and everything he has achieved,” Djokovic said. “He has been one of the all-time greats and one of my two biggest rivals. The matchups against Roger and Rafa have made me the player I am today so I am grateful I have had [so many big matches] against those guys.

Their semifinal, which will be played on Thursday evening, will be their 17th meeting in a Grand Slam event. Djokovic leads 10-6, and Federer’s last win in a Slam against his old foe was in the semifinals at Wimbledon in 2012.

Federer won their last meeting, in the ATP Finals in London in November, and Djokovic will not take anything for granted.

“Wimbledon last year, he had two match points, he was one shot away from winning that match, [so] it’s not like I’ve been dominating the matchups,” Djokovic said.

“But I’ve been feeling well on the court. I think if I continue playing the way I was throughout the tournament here and also in the ATP Cup, I’ve been building I think as the time passes by, in every match, I have more confidence. I feel better.”

“This is my favorite court, the court where I had the most success in my career. Hopefully things can come together for me in a positive way on Thursday and I can have a chance to win.”

As Djokovic said on court: “Let the better man win.”