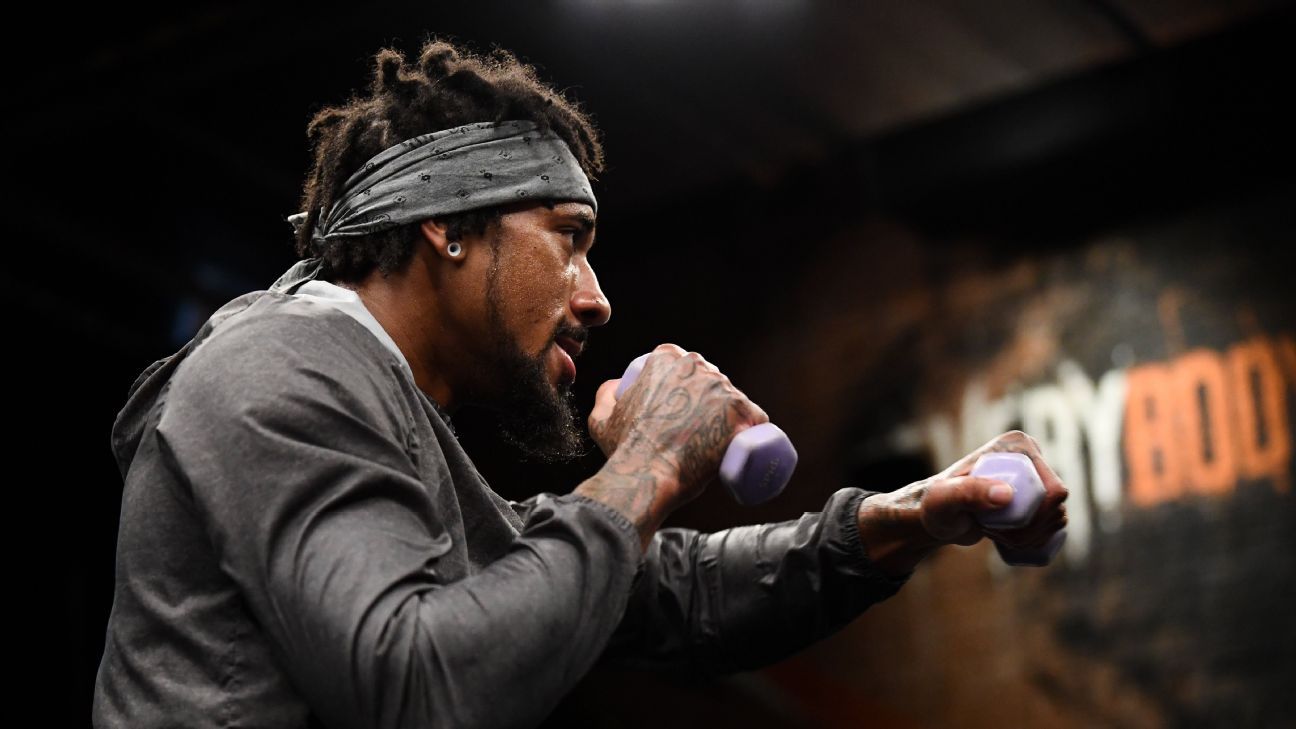 It’s what all boxers, not to mention fans and media, talk about wanting. Of course, the fighters want to win world titles and make the money that goes with them, but they also want the big one — a career-defining showdown that will help shape their legacy, serve as an important building block of a Hall of Fame résumé and significantly pad their bank account. The big fight also satisfies the desires of fans and media eager to see boxers in something more than a run-of-the-mill bout.

But some of today’s best boxers, despite prodigious talent, have been unable to land “the big one,” for a variety of reasons.

Here are five fighters I’d like to see get that big fight in 2020, rather than being forced to continue with routine assignments where the outcome does not appear to be in doubt.

Overview: Andrade, 31, was a 2008 U.S. Olympian, a two-time junior middleweight world titlist and he currently holds a middleweight belt. Yet he can’t get anyone of note to even mention his name, and that’s probably because he is a technical southpaw who brings massive risk without huge reward, despite having the talent to compete with anyone in his division.

In four fights as a middleweight, Andrade has barely lost any rounds. After Alvarez unified three middleweight titles by beating Daniel Jacobs in May, he could have faced Andrade for the undisputed title, something Alvarez had said he was interested in. But Canelo never truly pursued the bout, even though both of them are aligned with DAZN, making it a relatively easy fight to make.

Biggest fight so far: In his most recent fight in June, Andrade had the first hometown bout of his career in Providence, Rhode Island, where he drew a big crowd and turned in a dominant performance against a good contender in Maciej Sulecki. Andrade scored a first-round knockdown and cruised to a shutout decision.

Chances of a big one in 2020: It just doesn’t look good, despite Andrade’s calls for one. He just signed a four-fight contract extension with Matchroom Boxing and you would think the fact that he is with DAZN would help him land a fight with either Alvarez or Gennadiy Golovkin, because they are also signed to that platform. But neither will mention his name. That has left Andrade just trying to stay busy, which he will do Thursday night in Miami, where he is defending his title against little-known Irishman Luke Keeler (17-2-1, 5 KOs).

Matchroom Boxing’s Eddie Hearn has tried to secure that big fight for Andrade, going so far as to say he offered world titlist Jermall Charlo, who is with PBC but not signed to a promoter, around $7 million to fight Andrade with no strings attached in a one-off fight or, if Charlo preferred, as part of a longer deal. But Hearns said the offer was turned down. By the way, Charlo needs a big fight of his own, and this would have been by far his largest payday and most significant opponent.

Ideal fight: Against Alvarez or Golovkin to unify titles, but I would certainly be interested in a fight against Charlo.

Backstage at the Hooker-Saucedo fight, Terence Crawford and Errol Spence Jr. get into an argument that ends with Crawford saying he could knock out Spence.

Overview: Crawford, 32, has won titles in three divisions and currently holds a welterweight belt. He is universally regarded as one of boxing’s elite pound-for-pound fighters. However, he has been shut out of a major fight at welterweight, which is boxing’s most star-studded division. We all know the deal here: He is promoted by Top Rank and all of the other top welterweights are with Premier Boxing Champions — two rival promotions that, outside of the Wilder-Fury rematch deal, rarely do meaningful business. Crawford’s obvious big fights all are with PBC fighters: unification bouts with Spence or Pacquiao, or bouts with former titlists Danny Garcia, Shawn Porter or Keith Thurman.

Biggest fight so far: In August 2017, Crawford knocked out Julius Indongo in the third round to unify his two junior welterweight belts with Indongo’s two to become the undisputed world champion, the first ever at 140 pounds in the four-belt era. Indongo was not very well-known, but it was an important win for Crawford and the basis for his 2017 fighter of the year honor.

Chances of a big one in 2020: They appear slim, perhaps one of the reasons Top Rank promoter Bob Arum has talked up Crawford as a potential opponent for UFC star Conor McGregor in the cage as well as the boxing ring. That’s a fight (in either discipline) Crawford said he is up for, since none of the top welterweights seem too interested in fighting him. One sliver of hope is that Crawford and Porter, who are good friends, have said they would consider fighting each other and not allow their handlers to hold them back. But it seems more like just talk than anything serious at the moment.

Ideal fight: A unification match with Spence is one of the biggest and best fights that can be made in boxing, but a fight against any of the top PBC guys would be something to look forward to.

Overview: Bivol, 29, was a stud amateur and was put on the fast track as soon as he turned pro in 2014. He is arguably the most talented light heavyweight in the world and has made six title defenses, all in dominant fashion. Bivol has faced some good opponents in Sullivan Barrera, Jean Pascal and Joe Smith Jr., but none of them were perceived as dangerous. If you ask Bivol and manager Vadim Kornilov, they are ready, willing and able to take on anyone, but Bivol still doesn’t have a big profile and poses an immense risk for any opponent without huge riches to go with such a fight.

Biggest fight so far: At the time, his one-sided win over former world champion Pascal in November 2018 was perceived as a complete mismatch because Pascal appeared to be so badly faded. But now that win looks a lot better because Pascal looks rejuvenated, having won two fights in a row and a world title against quality opponents in Marcus Browne and Badou Jack.

Chances of a big one in 2020: It’s really up to Bivol and Kornilov, it seems. Working in his favor is that Bivol says he can fight at light heavyweight or move down to super middleweight for the right fight. He is also a broadcast free agent, which makes things less complicated, though he has worked with Matchroom Boxing and fought on DAZN on a fight-by-fight basis. However, if you talk to people in the industry, they say his asking price is about $2 million a fight, which is a bit rich for a guy who is very talented but has no particular fan base. A modification in financial expectations could put him in the thick of things for a unification fight or a fight at super middleweight against Alvarez or Callum Smith.

Ideal fight: A three-belt unification fight with Artur Beterbiev at light heavyweight, or a Canelo fight at super middleweight.

Overview: Davis, 25, a former two-time junior lightweight titlist and reigning lightweight titleholder, is an emerging star and a dynamic fighter with the potential to become one of the faces of American boxing. He has already drawn big crowds in his hometown of Baltimore and second home of Atlanta, as well as Los Angeles and London. But he will need to steer clear of the legal issues that have sometimes held him back, as well as persistent trouble making weight.

Biggest fight so far: He struggled to make weight for his most recent fight on Dec. 28, but eventually made it and drew a big crowd in Atlanta for a vacant lightweight title bout against the well-known former unified featherweight world titlist Yuriorkis Gamboa. Davis didn’t look great, but he scored three knockdowns against Gamboa, who fought with a torn Achilles tendon from the second round on. Gamboa was by far Davis’ most notable foe to date, and Davis was able to stop him in the 12th round.

Chances of a big one in 2020: Excellent. Mayweather Promotions and Showtime are all-in on Davis and plan to take him to pay-per-view this year for a major fight with Leo Santa Cruz, a four-division titlist and reigning junior lightweight titleholder. Davis wants the fight, as does Santa Cruz, and there is nothing holding it back from happening.

Ideal fight: A showdown with Santa Cruz fits the bill, though fights with Vasiliy Lomachenko, Teofimo Lopez Jr., Tevin Farmer or Devin Haney would also light up fan interest, despite various obstacles to making any of them a reality.

Joe Tessitore, Andre Ward and Timothy Bradley break down Miguel Berchelt’s victory over Francisco Vargas and look ahead to his future fights.

Overview: Mexico’s Berchelt, 28, one of boxing’s most exciting fighters, has made six junior lightweight title defenses since winning a 130-pound belt in January 2017. He has faced some solid opponents — including Francisco Vargas (in a rematch of his title win), former titlist Takashi Miura and former secondary titlist Jason Sosa — but he has yet to face a prime opponent who poses legit danger. Berchelt is, however, more than willing to fight a top opponent. He has said he would go to lightweight for a chance to face unified titlist (and fellow Top Rank fighter) Vasiliy Lomachenko, or welcome Loma back to junior lightweight and defend against him.

Biggest fight so far: In July 2017, Berchelt made his first defense against Japan’s well-respected former world titlist Miura on HBO. Berchelt dropped him in the first round, won a dominant decision and sent Miura into retirement.

Chances of a big one in 2020: Very likely. Berchelt’s mandatory challenger is undefeated and super exciting former featherweight titlist Oscar Valdez. That is a can’t-miss fight that Top Rank is looking to put together. It is likely to happen in May. Given today’s landscape for makeable significant fights, it’s about as big as it gets for Berchelt (and Valdez, for that matter).

Davis Cup: India relegated to World Group II
The European teams that have defied the odds since World Cup break
He’s no ‘messiah’ but Jones says Wallabies don’t know how good they can be
Kitayama leads at Pebble, where big winds await
Caps give Milano 3-year, $5.7 million extension